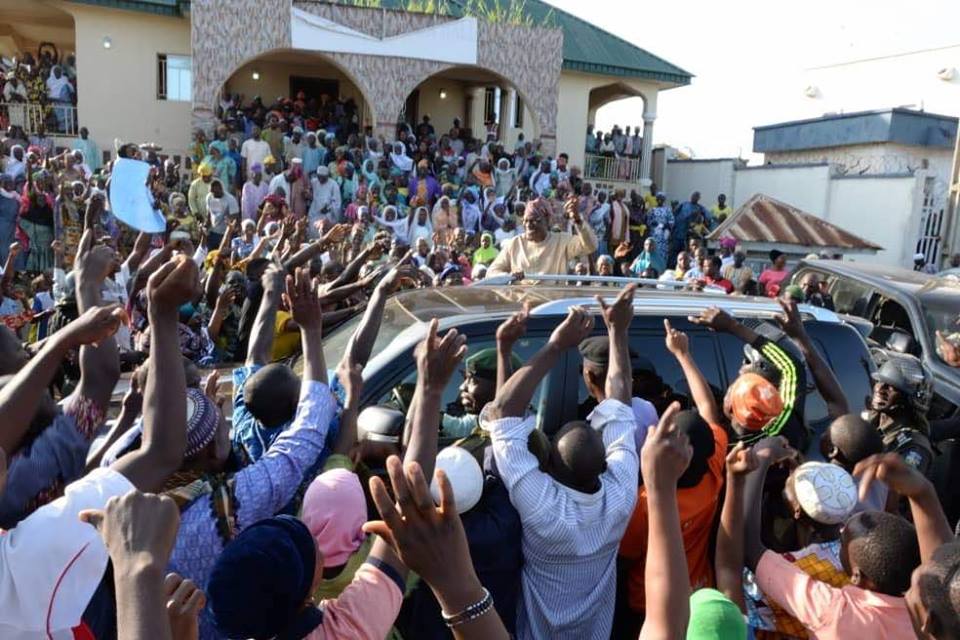 Governor AbdulFatah Ahmed of Kwara state was given heroic welcome by jubilant residents of his home town, Share on Thursday as sign of support and endorsement for his senatorial ambition.

Governor Ahmed fondly called Maigida who is running for Senate on the platform of Peoples Democratic Party (PDP) arrived Share on Thursday morning to seek for support of his own people.

The governor and his entourage were received by excited youths, women, men and elders of the community at the boundary and followed Maigida who they describes as ‘worthy ambassador’ to palace of Olupako of Share, Oba Abubakar Garba.

At the palace, Olupako of Share, Oba Abubakar Garba thanked Governor Ahmed for being a worthy ambassador of the town.

Oba Garba said: “This is your town and we’re 100% behind you. We will continue to support you to succeed. Wherever you go politically, we will stand by you.”

Governor Ahmed later met with stakeholders in the community at Share Township Hall to initimate them about his senatorial ambition and appreciate them for supporting current administration led by him from 2011 till date.

He promised to step up community development and attract federal government presence to Share as well as other communities in Kwara South, if elected senator in 2019.

The Chairman, Ifelodun Traditional Council, HRH Elese of Igbaja, Oba Dr Amodu Babalola Awuni Arepo III said: “We supported you to become the Governor about eight years ago and you have not failed us. We will support you once again in your Senatorial bid to represent Kwara South.”