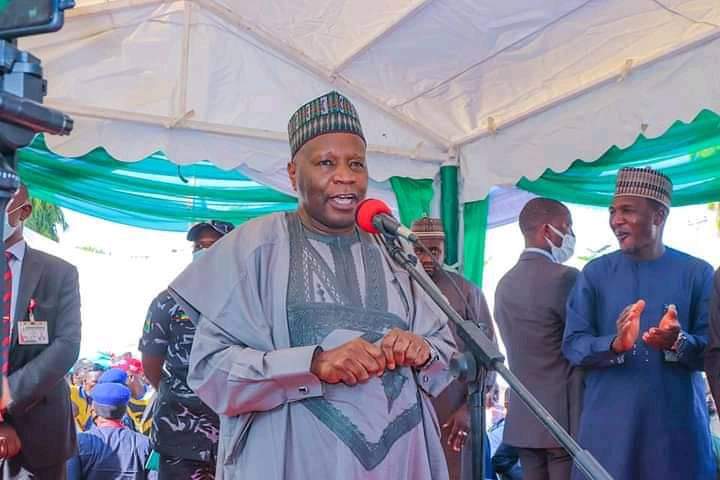 Gombe State Governor,  Muhammadu Inuwa Yahaya has participated in the affirmation of result of the All Progressives Congress, APC State Congress in Gombe State conducted through consensus method in line with the party’s guidelines, stakeholders’ resolution and democratic process.

Speaking shortly after the exercise, held at the Pantami township stadium, Governor  Inuwa Yahaya applauded the smooth conduct of the exercise, singling out the committee sent from the National Headquarters of the APC for special commendation.

“I want to thank Almighty God for giving us the opportunity to elect new leadership of our party at the State level, following the smooth conduct of the ward and Local Government congresses in the State.  Today’s State Congress which saw the election of 36 State Executives was conducted in accordance with the party guidelines and the expressed buy-in of stakeholders of the APC in the State”.

To this end, Governor Inuwa Yahaya expressed gratitude to  APC stakeholders and supporters alike for their continuous solidarity and cooperation before and after the formation of Government in the State.

The Governor remarked that the State congress witnessed some change of guard, especially in the vacuum created by the death of some executive members and the fragility of some others due to old age.

He maintained that these decisions were meticulously considered by the party in order to avoid the possibility of any rancor that may arise within the ranks of the APC in Gombe State.

“This is a thing of joy and pride for the APC in Gombe State to have unanimously arrived at a collective decision in the interest of all. In some states such inclusiveness was not obtainable but here in Gombe we tried to carry everyone along and I am happy with the support, cooperation so far received from the stakeholders and supporters of the party”.

Governor Inuwa Yahaya appealed to the newly elected  Executives of the party at the State level to see their election as not only a trust but a call to service with commitment and dedication towards the growth and development of the APC in the State.

“And same applies to the wards and Local Government party Executives, we must work even more harder to strengthen the party because it is only with the presence of a strong party can we all be nominated to vie for any political position”.

Governor Inuwa Yahaya used the occasion to warn saboteurs whose stock in trade is to cause confusion and undermine the party, maintaining that APC will not condone any act that will bring the party to disrepute and will not hesitate to sanction such unscrupulous elements in line with rules and regulations guiding the party.

“To the best of my knowledge all the congresses conducted in the State have  the buy-in of our party members; so it is only honourable for each and everyone of us to maintain our commitment in the interest of the unity, progress and development of our  party “.

The Governor assured the people of Gombe State that with their continued support and solidarity,  his administration will continue to deliver the dividends of democracy as encapsulated in his campaign manifesto.

“As a Government, we want to specially thank the National APC election committee, the National leadership of the party under the watchful eyes of the Yobe State Governor, Mai Mala Buni and most importantly I want to appreciate the President of the Federal Republic of Nigeria, Muhammadu Buhari for his inspirational leadership in the party and the country as a whole despite the prevailing challenges”.

The Chairman of the All Progressives Congress National Election Committee for Gombe State, Dr. Danjuma Dabo, expressed gratitude for the support and cooperation accorded his team which ultimately led to a peaceful, free and fair congress.

He explained that of the 784 expected delegates for the APC Congress in the State, his committee was able to carry out accreditation for 712 for the exercise which was monitored by a team from the Independent National Electoral Commission, INEC and observed by Civil Society Organisations and the media.

“As you can see for yourselves, the affirmation of the new State party Executives went on well. There is an excellent understanding in the ranks of the APC in Gombe State and that equally made our job easier”, Dr. Dabo said.

Earlier speaking, the Senator representing Gombe north, Sen. Saidu Ahmed Alkali commended Governor Inuwa Yahaya for giving every member of the APC a sense of belonging towards the formation of the leadership of the party in the State.

The Senator stressed that the vote of confidence passed on Governor Inuwa Yahaya by the three senatorial districts of the State was a result of the Governor’s commitment and determination to carry every section of the State in the scheme of things.

They reaffirmed their unalloyed support, solidarity and confidence in the leadership and political direction of Governor Muhammadu Inuwa Yahaya.

Speaking on behalf of the new Gombe State APC executives, the re-elected Chairman, Mr. Nitte Amangal appreciated members of the party, especially delegates for finding them worthy to lead the APC in the State.

He however cautioned those aspiring for various positions in the party against campaign of calumny, character assassination and use of inciting words especially in the media as they go about their political activities.

Mr. Amangal commended Inuwa Yahaya’s robust leadership which he said inspires party members, expressing confidence that the governor will not have any opposition from within the party and that he will have a smooth ride back to his seat in 2023.

Earlier in his welcome address, the Secretary to the State Government, Professor Ibrahim Abubakar Njodi, applauded the leadership of Governor Inuwa Yahaya and appreciated all stakeholders for upholding the interest of the party in high esteem.