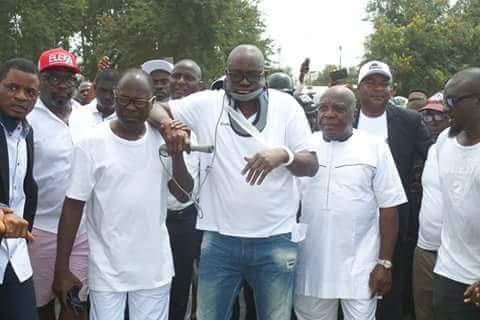 Ekiti State Governor, Mr Ayodele Fayose, broke down on Wednesday while accusing policemen of beating, shooting at him, and brutalising Peoples Democratic Party supporters in the state.

Fayose made the allegation in Ado-Ekiti, the Ekiti State capital at a rally organised by the Peoples Democratic Party (PDP).

“They (the police) are beating anybody who has any sign of PDP on them. They are not picking our calls; they’ve made up their minds to do this evil.

“I am in pain, I am in severe pain. I can’t turn this neck anymore. If anything happens to me, the Inspector-General of Police should be held accountable,” the governor told reporters while crying at the rally.

The governor spoke after security operatives dispersed supporters of the PDP from the popular Fajuyi Park in Ado Ekiti where they had gathered for a rally ahead of Saturday’s governorship election in the state.

Governor Fayose attempted to lead the supporters back to the park but the move was thwarted security operatives who reportedly fired gunshots into the air again.