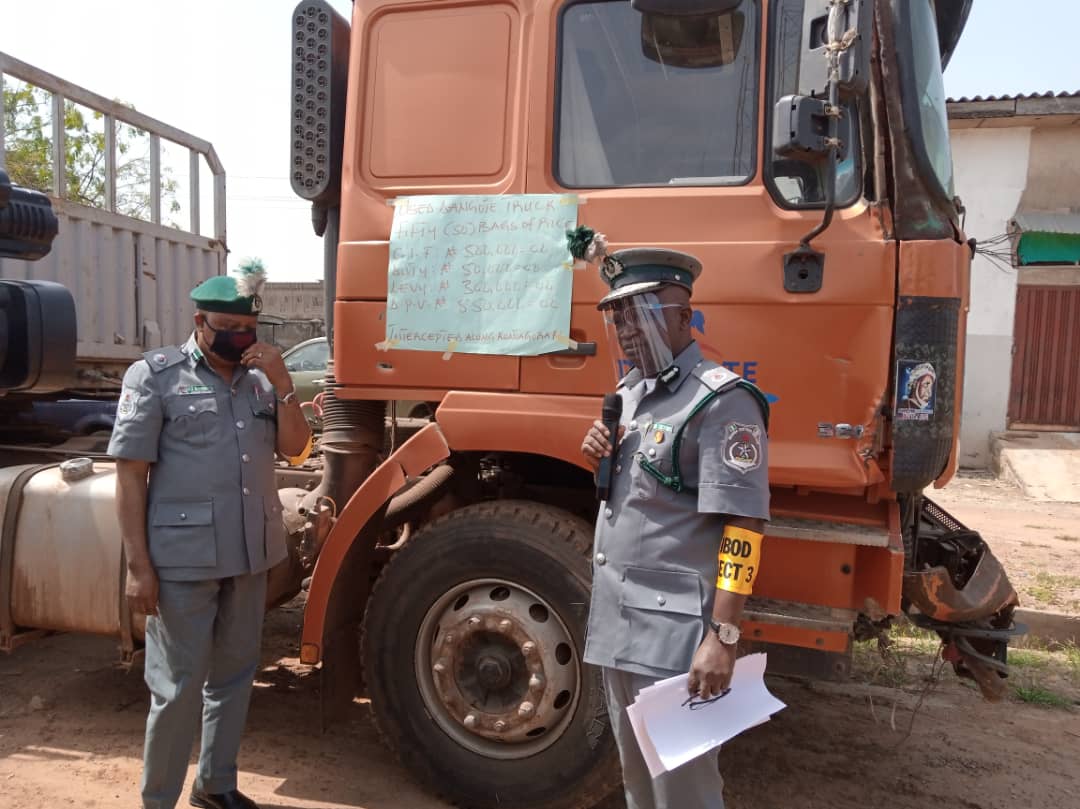 The Joint Border Operations Drill (JBOD) Sector 3 has seized a total sum of N53, 158, 143million worth of goods from smugglers in five weeks.

The new Coordinator of Joint Border Operations Drill, Sector 3, Compt. Olugboyega Peters revealed this during a press brief in Ilorin on Thursday.

The Coordinator said that part of the strategies deployed against all forms of smuggling, human trafficking and proliferation of arms and ammunition led to 65 seizures of different items.

The newly posted coordinator of Sector 3, Compt. Peters assumed office on October. 12 and within the period made the following seizures.

The team made some seizures, which includes four single barrel of riffle, 1, 643 bags of foreign rice, 373 Jerri cans of PMS of 25 liters, 12 Jerri cans of AGO, 32 used vehicles, four bales of second hand clothing, a motorcycle and a suspect was arrested.

“We shall continue to wage war against smugglers, as every effort or tactic exhibited by them to beat security checks operatives will remain fruitless

“Smugglers will be uncovered due to our high level of intelligence, systematic monitoring and mechanism put in place to track down these economic saboteurs and their sponsors,” he said.

Compt. Peters said that the current administration has zero tolerance for corruption and revenue leakages in all its ramifications, and the sector would continue to re-invigorate strategies that will enhance performance.

Speaking on the attack by ENDSARS protesters on Custom House, Kwara command, the Coordinator commended the effort of Nigeria Customs Service, JBOD and all sister security agencies for exhibiting their professionalism in handling the incident.

He said that the aftermath of ENDSARS protest was a commendation letter sent to the command by the Comptroller General of Customs and his able management team for exhibiting such gallantry, in terms of excellent performance, integrity, high ethical standard, good conduct and unalloyed commitment to the service.

The Comptroller appealed to Nigerians, especially members of the business communities to assume the duty of border drill as an opportunity to further create a conducive environment for local business.

He said that the exercise was for the overall interest of national security, well being of the citizen and economic development, including creation of job opportunities, reduction of crime rate and other social vices.