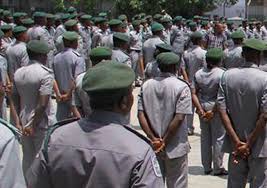 Compt Peters said the seizures cover the team’s  performances  from April to August 2021.

According to him, Smuggling is an illegal transportation of objects, substances or goods across the National borders, through unapproved routes or illegal means in order to evade payment of duty.

”Such items include Worn cloths, Drugs, Arms and Ammunition, Rice, Used Vehicles, Frozen poultry products, Petrol etc. Within the period under review, the smuggling activities at Sector 3 have been reduced by an impressive 85% due to the way we are policing our areas of responsibility in line with the Federal Government directives on Partial Closure of our National Borders.” The Coordinator added.

Peters said the Nigeria Customs Service in collaboration with Nigerian National Petroleum Corporation (NNPC) will use Operation White Hilux Team to control the smuggling of petroleum products across the border.

”Just yesterday, the sector 3 held a sensitization meeting with IPMAN Kwara State Chapter and Petrol station owners about the do’s and don’ts, as heavy sanction/penalty await any erring persons or group of persons”. He explained.