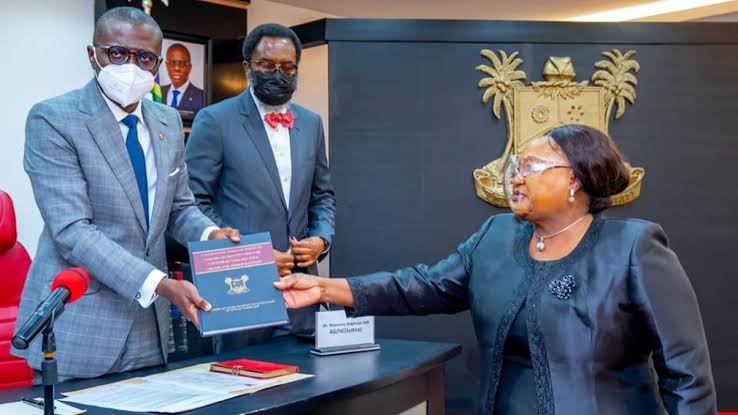 The Foundation for Peace Professionals (PeacePro) has urged Lagos State Government and other Nigerians to allow ENDSARS Judicial Panel to reconcile errors discovered in their report.

1. On October 20, 2020, a significant event took place at Lekki toll gate in Lagos State, amidst the successful and globally acclaimed Endsars protest against police brutality in Nigeria.

2. The Endsars protest remained largely peaceful, until it was hijacked by groups and individuals with vested interest, leading to outright break down of law and order, which include but not limited to killing of innocent citizens, attack on critical infrastructures and burning of police stations across the country.

3. The destructive and criminal dimension the protest took, necessitated different interventions from government, including deployment of soldiers to Lekki toll gate, a major convergence point for the protest in Lagos State.

4. The intervention of soldiers in Lagos, particularly at the Lekki toll gate and the subsequent events that took place there has been popularly described as #LekkiMassacre, a massacre the army authorities have described as none existent.

While the media maintained that massacre took place at Lekki, with various figures being paraded, nobody has been able to present a clear picture of what really transpired in a comprehensive manner.

5. The Lekki incident, which many described as massacre, while others insisted was a massacre without bodies has divided opinion, not only in Nigeria, but across global media space and in an effort to establish truth, a 9 persons judicial panel of inquiry was set up by the Lagos state government, not only to look into the Lekki incident, but to also look at other Endsars related events.

6. After a year of painstaking investigation, the Endsars panel of inquiry submitted its report to the Lagos state government this past week and the government instantly set up a white paper committee to look into the report and recommend to government, what to make of the report.

However, before the 2 weeks given to the white paper committee started to count, an alleged soft copy of the report has been released on social media and those who have read it, including legal personalities have faulted it, pointing out over 40 discripancies in the report.

Some have also claimed that, based on the strength of evidences obtained by the panel as contained in the report, its recommendation cannot be substantiated or justified.

7. We, at Foundation for Peace Professionals have carefully listened to the various analysis and opinions advanced by analysts and legal practitioners, pointing out numerous discripancies in the panel report and admittedly, the discripancies pointed are heavy, valid and not less seminal. As a matter of fact, we are of the view that indeed, the errors so far identified put the integrity of the report into question, but those errors are not enough to disregard the report in its entirety.

8. We are of the view that, irrespective of the identified errors and integrity issue with the report, Lagos state government should take full responsibility for the report, being the one who nominated all members of the panel.

9. It is on record that the Lagos state government invited all members of the panel to participate in the inquiry, knowing their interest, anticedent and alleged prejudice.

10. Additionally, we observed that none of the 9 persons on the judicial panel claimed to have a contrary opinion, other than what is contained in the report and they all assented their signature to the final copy. This means that, all those in the panel, despite being nominated by the Lagos State government are in agreement with the findings of the panel.

11. In view of the above, we encourage the Lagos state government to take full responsibility for this report.

12. We maintained that, observers during the panel hearing may only observe, the final decision rest with the members, which they have all exercise, without any dissent.

13. It is important to note that, while we understand that the report may not be perfect as being pointed out by different analysts, we are of the view that the errors identified in the report will not make it less seminal, neither can those errors be enough justification to wish away the findings.

14. We therefore urge the Lagos state government to take full responsibility for the report and take appropriate action on the recommendation of the panel.

15. On the errors and discrepancies identified in the report, the panel should be given opportunity to reconcile the errors and provide justification for them.