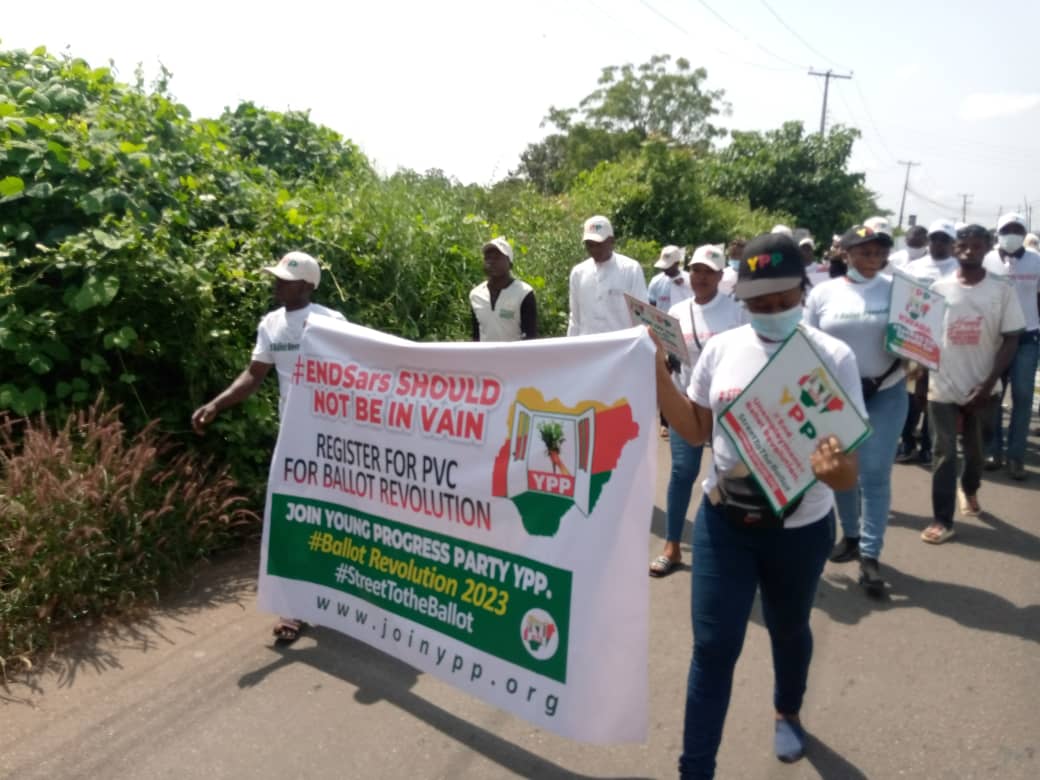 Members of the Young Progressives Party(YPP)in Kwara State on Thursday staged a peaceful demonstration in Ilorin, the state capital to mark one anniversary of # EndSARS protest.

The rally took off at the party’s secretariat, behind Kingstone Hotel, off Agba road, GRA, Ilorin after the party’s chairman, Mr Charles Folayan addressed the media on the import of the anniversary of the #EndSARS protest.

The demostrators gaily dressed in vests and face caps with YPP’s inscriptions carried placards with inscription” #EndSARS protest will not end in vain.”

Addressing newsmen, the YPP chairman, Folayan recalled that “a year ago, Nigerian youths across the country spoke out loud and clear with one “SoroSoke” voice, against police brutality and bad governance. We expressed our anger and frustration, and demanded for a reset.

“Armed only with internet connectivity, social media skills, unity, collective purpose, and a burning passion for a better Nigeria, youth shutdown the nation and forced the Nigerian Government to promise the immediate disbandment of the notorious SARS unit and pledge reforms for officers of the Nigerian Police Force.

“With a purely egalitarian structure, youths provided security, legal and health services, entertainment and funds for the protest. There was no differentiation along religious or ethnic lines. Nigerian youths do not think along the lines of East or West; North or South. This is reserved for the deeply entrenched ‘political elite’ that have held this country by the throat”.

He said the youths can never forget that many young Nigerians were injured, and lost their lives in the course of fighting for a better society.

He charged his colleagues to ensure that the sacrifice of ‘these fallen heroes’ was not in vain, adding that they must see the EndSARS protest as proof of the youths power and capacity to rebirth Nigeria.

“It is based on our understanding of the Constitution of the Federal Republic of Nigeria, that the only way to bring about change in a democratic setting is to participate in the political process, and governance structure. That was the reason the Young Progressives Party – YPP was formed. YPP is a genuine platform for new generation leaders who are in politics to serve the people, not themselves,” Folayan stated.