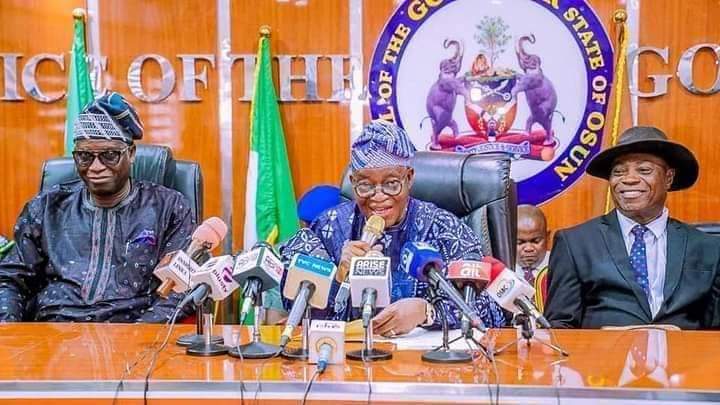 The Government of Osun on Thursday presented cheques of N53,290,000.00 as compensation to 13 victims of police brutality in the State.

The gesture was a further testament to the commitment of the State Government to peace, unity, justice, equality, and indeed, the rule of law.

This is even as the State Governor, Adegboyega Oyetola affirmed that, the motive was a deliberate quest to redress the wrongs of yesterday and set the State on the path of true healing.

Recall that Governor Oyetola, in compliance with the directive of the Federal Government, constituted the
Judicial Panel of Inquiry against Police Brutality, Human Rights Violations and Related Extra Judicial Killings.

The Panel which was headed by the retired Judge of the High Court, Hon. Justice Akinwale Oladimeji, was charged to look critically and painstakingly into cases of assault, illegal arrest, killings, brutality and other forms of rights abuse by the officers and men of the disbanded Special Anti-Robbery Squad (SARS) of the Nigerian Police.

This was against the back drop of the organic nationwide EndSars protest that constitutes a critical milestone in the nation’s political history, especially with regard to citizens-police relations vis-a-vis the allegations and the subsequent agitations that followed.

However, the presentation of the cheques to the victims was a fulfilment of the financial component of the recommendations of the Panel as the state was strictly in adherence to the directive to States, since it submitted the report of the Panel to the Federal Government.

Presenting the cheques to the victims whose cases had been justified and recommendations for compensation were being passed by the Panel in his office, State Government Secretariat, Abere, Osogbo, Governor Oyetola said the initiative has further confirmed that his administration was conscious of the fact that no society can truly progress where the reign of injustice, inequality and lawlessness is encouraged to thrive.

He reiterated his Administration’s commitment to continuously maintain peace, guarantee the security of lives and property of the citizens and advance the course of the security agencies through the provision of state-of-the-art security architectures.

Governor Oyetola who appealed to the citizens to continue to be law abiding and always demonstrate the virtues of Omoluabi ethos that the State is known for said the State would spare no effort to creating ambience of peace and tranquility for the citizens across the nooks and crannies of the State.

“Today’s occasion should therefore be regarded as a deliberate quest to redress the wrongs of yesterday and set our society on the path of true healing.

“Our decision to pay compensation, which ordinarily is not the responsibility of the State, since the Police is not directly under our control, is a further testament to the commitment of our Administration to peace, and the rule of law.

“Let me however reiterate here that the list of all those that have secured judgement debts have been passed on to the federal government for necessary action, in line with the recommendation of the Panel.

“As an administration, we understand that no society can truly progress where the reign of injustice, inequality and lawlessness is encouraged to thrive.

“On behalf of the Government and our people, I passionately appeal to all those who are justifiably aggrieved for the wrongs meted to them in one way or the other to forgive and allow the next chapter of true and sustainable healing to open up for the good of all.

“I assure you that we are committed to supporting the Nigeria Police Force in fully implementing relevant reforms that would enable it play its role of maintaining law and order.

“Today’s event is a further testament to the commitment of our Administration to peace, and the rule of law. As citizens and officers of the State, let us reciprocate this gesture by continuing to relate with each other with highest mutual civility, respect and understanding in the interest of sustainable peace and development.

“I salute the leadership of the Civil Society Organisations and youths for their understanding and tolerance over the years. I assure you that we will never let you down as a government in ensuring that we secure your future.

“On behalf of the Government and People of Osun, I express immense gratitude to the Hon. Justice Oladimeji-led Judicial Panel of Inquiry against Police Brutality, Human Rights Violations and Related Extra Judicial Killings for their impeccable services to the State”, he said.

Earlier in his remarks, the Chairman of the Panel, Justice Akin David Oladimeji extolled Governor Oyetola for deeming it fit to compensate the victims inspite the lean purse of the State.

Oladimeji who described the gesture as a right step in the right direction noted that the decision would further register confidence in the minds of the people.

Speaking after they received their cheques, some of the victims who narrated their ordeals in the hands of police expressed their profound gratitude to the Governor for the kind gesture saying he has indeed demonstrated that he is people’s Governor.