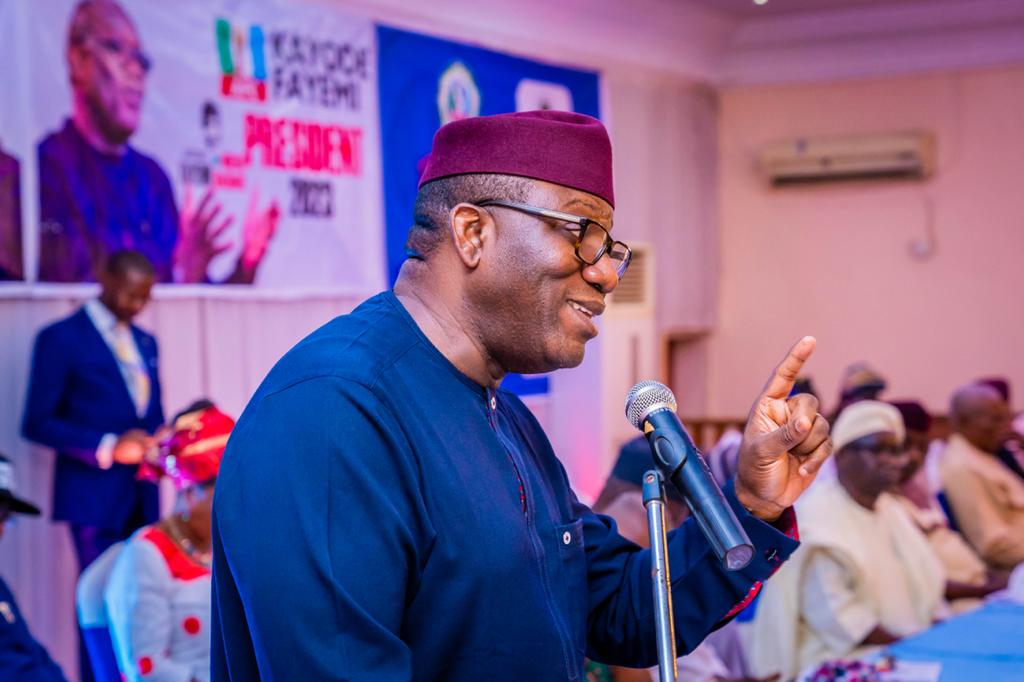 Ganduje who recalled how governor Fayemi stood by him in 2019 governorship election in Kano, declared that he will never repay good with evil.

A statement released on Friday in Abuja by the spokesman of Dr. Kayode Fayemi Campaign Organisation, Femi Ige, said Governor Ganduje who was represented by his deputy and governorship candidate of the party, Dr Nasiru Gawuna, made the declaration when Fayemi’s campaign team visited the state on Thursday.

According to Ganduje, Fayemi’s management and leadership qualities are apparent to all.

“Your leadership qualities are not hidden. The way you have led the Nigerian Governors Forum (NGF) for two terms with unity of purpose and with no dissent is a testament to your leadership skills. You have led 36 governors from across different parties effectively. You have actually been president without having ministers and discharged your duties creditably well, so we have no fears about supporting you because the morning tells how the day will look like.”

Continuing, the Kano governor recounted Fayemi’s solid support during his own trying times and said it would not be in his character to repay good with evil.

“During the governorship rerun in 2019 when everyone left us, you stood by our government, in fact you were the only governor who came here and fought until victory was achieved, so we owe you on that front too.”

Also speaking, the Director General of the Kayode Fayemi Presidential Campaign Organisation and former Deputy National Chairman of the APC, Senator Shuaib Lawal advised the Kano delegates to choose wisely as Nigeria was too divided, lean economically and in a state of war to trust a neophyte into power.

Shuaib Lawal said: “The next president must have capacity, education, intellect, wide network and courage in order for the country to move forward in the right direction. Our military, economic, religious and cultural disunity means we must not put a neophyte in power.”

Responding, the presidential aspirant promised to address the problems that led to the death of the Kaduna /Kano textile industries by tackling power and insecurity.

“It’s in an atmosphere of peace and unity that we can grow. I’ll retool the military, expand intelligence, increase use of technology and effectively halt our nation’s match into lawlessness, insurgency and anarchy if elected.

“The Kaduna /Kano textile industry that is also a major source of employment and contributor to the GDP will be revamped. We will also tackle the problem of electricity by breaking down this national grid that’s always collapsing into zonal grid and micro grids in order to ensure constant power supply and push the country on the path of industrialisation.”