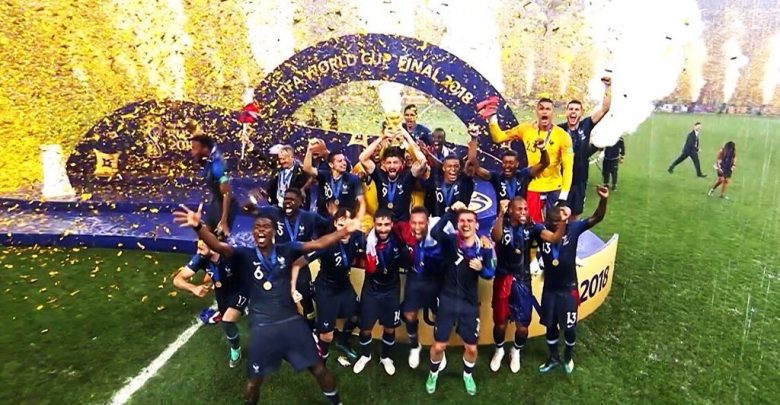 France are Champions of the World, thanks to a 4-2 victory over Croatia in Sunday’s final at Luzhniki Stadium.

Les Bleus took the lead, after Antoine Griezmann’s free-kick crept in, via a deflection off Mario Mandzukic on the 18th minutes.

After which Ivan Perisic equalized 10 minutes later with his fourth goal of the tournament, firing past Hugo Lloris from inside the box on the 28th minutes.

The centre referee, Nestor Pitana of Argentina, adjudged that Perisic handled the ball, after viewing replays from the video assistant referee (VAR) and awarded a penalty, which Griezmann calmly tucked away on the 38th minutes to end the first half 2-1 in favour of France.

Manchester United midfielder, Paul Pogba stretched France’s lead with a third on the 59th minutes; before Kylian Mbappe made it 4-1 for coach Didier Deschamps’ tutored side with a vicious drive.

Mandzukic, however, pulled one back for the Croats after Lloris dithered on a back pass to end the game 4-2 in favour of France.

After the game, Croatia captain, Luka Modric was given the player of the tournament award which is the Adidas Golden Ball while France Kylian Mbappe won the FIFA Young Player award and Belgium keeper Thibaut Courtois went home with the Golden Glove award.