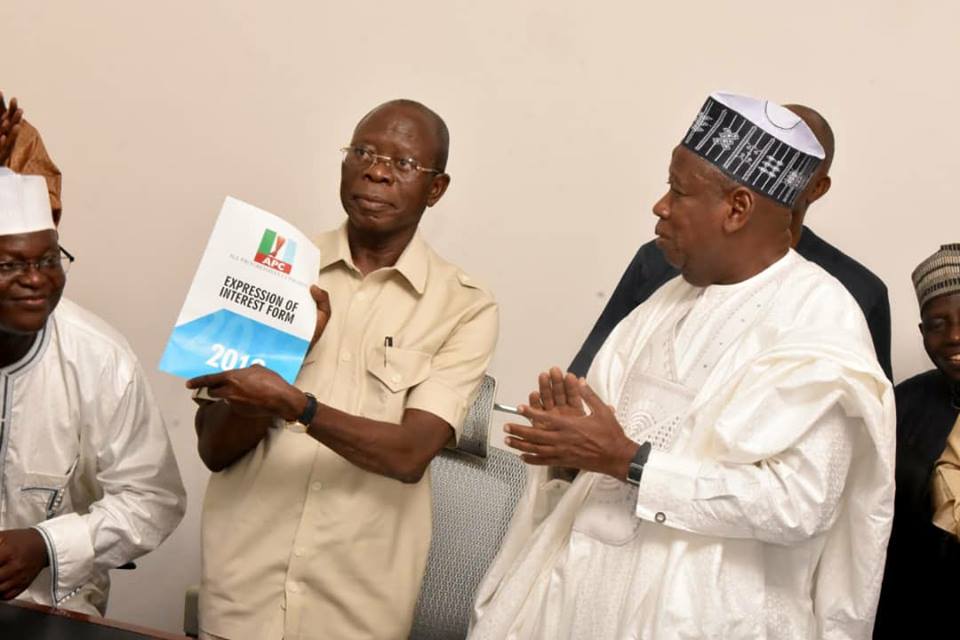 Gov. Abdullahi Umar Ganduje of Kano late Wednesday evening submitted his Expression of Interest and nomination forms for the 2019 gubernatorial election to the National chairman of the APC, Comrade Adams Oshiomole, in Abuja.

He was accompanied by Sen. Barau Jibrin, the former Minister of Education, Malam Ibrahim Shekarau, serving members of the National Assembly and other aspirants who also submitted their forms respectively.

During the brief occasion, Governor Ganduje said although the submission of his form would have been low-keyed, he decided to invite aspirants to accompany him in a big way “to show that Kano is different, Kano is solid and we are together. Kano is the most populous state in the nation, the stronghold of our President so we must come in a big way”.

The governor, who highlighted the progressive nature of Kano politics, said several aspirants have indicated interest to vie for numerous positions on the platform of the state APC to demonstrate the fact that democracy was at work.

In this regard, he maintained that APC stakeholders in the state have opted for Direct primaries to conduct elections for the emergence of candidates to fly the party’s flag in the 2019 general elections. “Direct primaries will provide level playing ground and ensure participatory democracy in the party”, the governor asserted.

Governor Ganduje who assured the APC National chairman that the people of Kano were solidly behind him and President Buhari expressed appreciation to various associations in the state who contributed money and bought the gubernatorial nomination form for him.

Receiving the forms, APC National Chairman, Adams Oshiomole thanked Governor Ganduje for providing worthy leadership in the party and appreciated the people of Kano for their support to the party and under President Muhammadu Buhari.