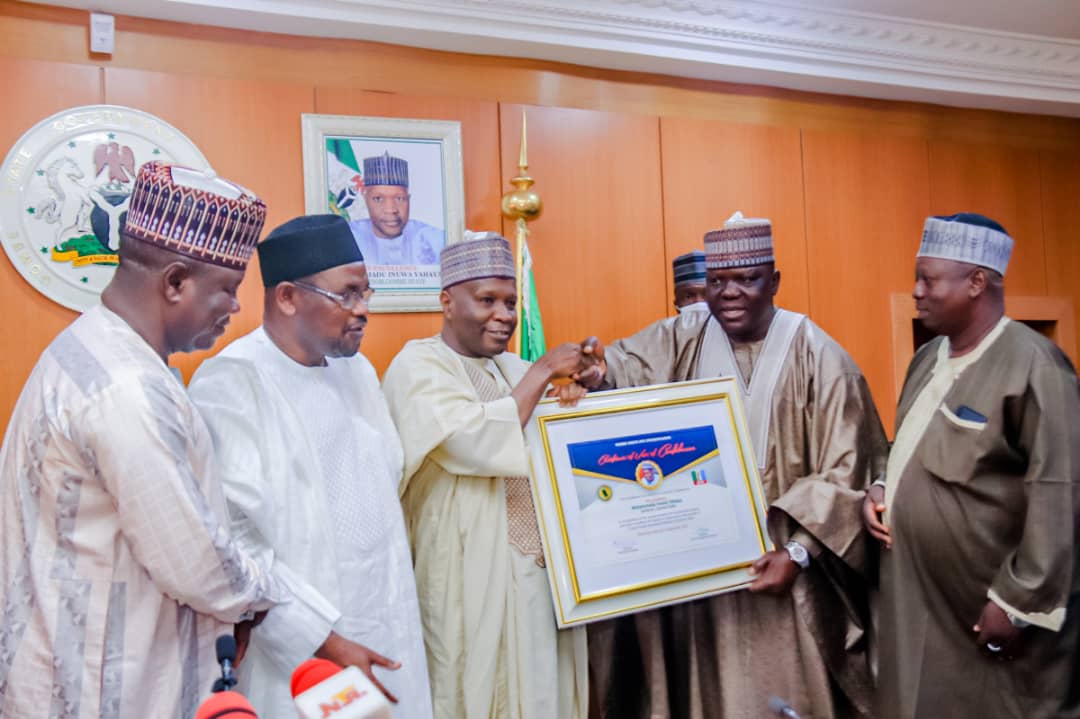 The All Progressives Congress (APC) stakeholders in Gombe South Senatorial district has presented Vote of Confidence to Governor Inuwa Yahaya.

The APC stakeholders from Gombe South Senatorial District presented the certificate when they paid him a solidarity visit at the Government House.

The stakeholders led by the Senator representing the zone, Bulus K. Amos were at the government House to present a certificate of ‘Vote of Confidence” passed on the governor during the last Saturday’s APC stakeholders meeting in Kaltungo over his commitment in putting the zone and the state on the pedestal of development across key sectors of the economy.

Honored and elated by the visit, Governor Yahaya expressed gratitude to the forum for recognizing his administration’s developmental strides, describing his endorsement by Gombe south senatorial district as a pointer that the zone is satisfied with his performance in the 2 year journey of his government.

He recalled that during the electioneering campaign, his burning desire as always, was for his administration to spread real time prosperity to the people so as to enthrone dignity, Justice and equality among the people.

“So far I can say what we did that warranted this special recognition was the implementation of the promises we made to the people and I am happy to note that even those people that live directly in Gombe south know that ever since Gombe State was created in 1996, no Government had ever within 2 years put in that much to better the lives of the people in the zone like our administration has done”.

Governor Inuwa Yahaya noted that the essence of Government is to bring development to the people and secure their lives and property to guarantee a peaceful and harmonious society where everyone can harness their God-given potentials.

He stressed that his administration will not develop cold feet in putting the yearnings and aspirations of the people above any other primordial interests, assuring the people of Gombe south that this is just the beginning of more good things to come.

Governor Inuwa Yahaya said despite the distinctive differences that exist among the 3 Senatorial Districts in the State, there lies a unique gift each of the zones can be proud of, thereby exploring it as a comparative advantage to the benefit of all.

Governor Inuwa Yahaya said with the exception of the Dadinkowa Dam, the Balanga and Cham Dams, both in Gombe south, can be effectively transformed to spread prosperity to the people such as the Kadawa dam in Kano State.

The Governor expressed dismay over the inability of the Balanga Dam to generate wealth for the people despite the 45 million pounds loan facility invested in the dam some 4 decades ago.

He remarked that his administration had to take advantage of the 40 megawatts capacity Dadinkowa multi purpose dam to site the Muhammadu Buhari Industrial park which will facilitate the take off of several industries thereby providing job opportunities for the younger ones.

He assured the people of Gombe south that his administration is in talks with the United Nations Industrial Development Organisation (UNIDO) to establish an agricultural processing zone and a mini hydro dam.

“With this alone, this Government has so far expended close to 50 million naira just to prepare the grounds on which the investors can come and do the feasibility studies”.

Governor Inuwa Yahaya maintained that his administration is keen towards building a Gombe south that can be a clearing house for not only food production but as a hub for Agro allied industries.

The Governor also sought the support and cooperation of the people, especially the elites to join forces with the government in order to achieve the task.

“Whatever we are doing, the ordinary man has that high hope in us and the expectations are high; so we shall continue to work hard to make sure our people benefit from God’s endowed resources which we have them in abundance”

He said it will be counter-productive if the younger generation are educated and eventually find nothing to engage themselves, saying such youths can one day turn out to be social defiants in the hands of merchants of destruction.

It was for this reason that the Governor said his administration will champion an industrial revolution across the State to ensure the economic emancipation of the people.

Earlier, the Senator representing Gombe South Senatorial District, Sen. Bulus Amos who led the APC stakeholders, said the certificate of Vote of Confidence presented to Governor Muhammadu Inuwa Yahaya was a fall out of the Saturday’s meeting in which the forum unanimously endorsed the Governor’s incredible performance in the zone and the State at large.

He described the Governor as a goal getter and a promise keeper whose political ideology and disposition are driven by passion, administrative sagacity and determination to always take development to the door steps of the people.

The Senator said never in the history of the State had billions of naira been spent in Gombe south to bring meaningful development to the people of the zone.

It was for this reason that Senator Bulus Amos informed the Governor that the people of Gombe south will continue to stand shoulder to shoulder with him and his leadership so that his second term bid can be realized with utmost ease.

On the delegation were members of Gombe State House of Assembly, Chairman of APC State Caretaker Executive Committee, SSG, and other political appointees, local government Chairmen as well as other critical stakeholders from the zone.