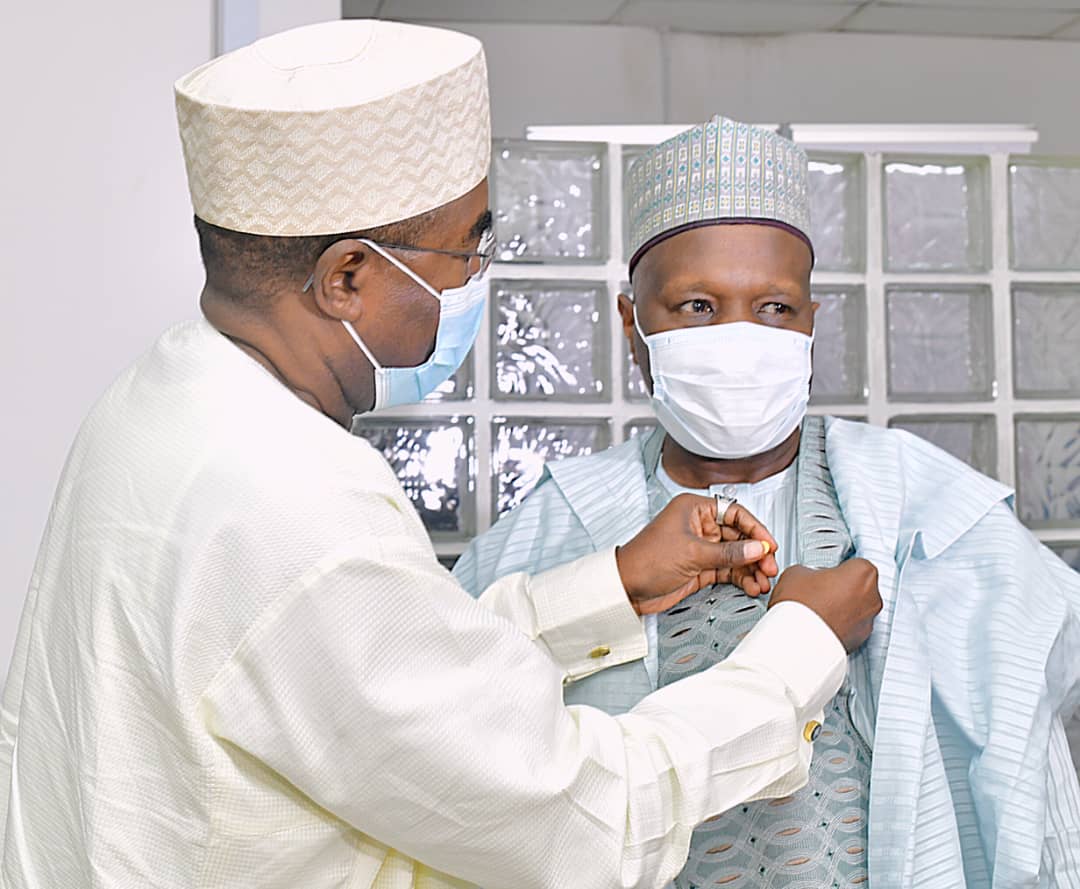 Governor Muhammadu Inuwa Yahaya of Gombe State has advocated for more synergy between the State and the National Drugs Law Enforcement Agency, NDLEA in order to rid the society of illicit drugs.

Governor Inuwa Yahaya stated this when he visited the Chairman and Chief Executive of the National Drugs Law Enforcement Agency, NDLEA Brigadier General Buba Marwa, Rtd at the Agency’s Headquarters in Abuja.

The Governor observed that there is a strong correlation between the use of illicit drugs and the probability to commit crime and criminality in any given society.

He noted that one of the ingredients fuelling crime and criminality, particularly the ongoing insurgency in the North East can be attributed to the use of illicit drugs which often distort the sanity of the human psychology.

“In the last two years, I saw a lot of development with regards to these issues and being the Governor, naturally all issues tend to end up on my table and we can put a good percentage of all these negative developments in our society to issues that have to do with drugs”.

Governor Inuwa Yahaya said depite having a good presence in Gombe, there is the need for the State and the NDLEA to re-strategize and collaborate more in the fight against the use of illicit drugs their peddlers, moreso that the State sits at the centre of the North East and an easy access for all manner of people including the good and the bad.

“Gombe being at the centre is now a transit route for drugs and some times even weapons. I have made several trips to the Defence Headquarters where I met the Chief of Defence Staff and the Chief of Army Staff and eventually ended up seeing the National Security Adviser and Mr President. I know when we have control over illicit drugs every other issues can be controlled as well”.

The Governor said his visit to the NDLEA headquarters was to solicit for more support from the Agency so that together with the effort of the Gombe State Government, they eradicate the use and trade of illicit drugs.

He commended the Agency over its high profile arrests of drug dealers across the country and other successes achieved in the war against drug abuse.

The Chairman of the National Drugs Law Enforcement Agency, NDLEA, Brigadier General Buba Marwa, Rtd said the drugs scourge is an unacceptable situation considering the damage it has done to the psyche of country.

He said with 13.6 percent prevalence the North East ranks fourth among the six geo-political zones of the country.

The NDLEA boss, thanked Governor Muhammadu Inuwa Yahaya for partnering with the Agency at the State level to combat the use and trade of illicit drugs.

” I am in constant touch with our commander in Gombe and she has mentioned that His Excellency has been given us support and we really appreciate your efforts so far”.

He equally thanked Governor Muhammadu Inuwa Yahaya for doing everything necessary to maintain peace and tranquility in the State despite being at the centre of the insurgency- stricken North East.

“I must use this opportunity to commend you for the excellent work you are doing in Gombe, the infrastructure, Agriculture and security; I don’t know if you have a military or paramilitary background somewhere but in the current climate in the North, Gombe is relatively peaceful. Here the leadership has a very important role to play and you have mentioned yourself how you have interacted with the President, the Chief of Defence Staff and other service chiefs. This is really the way to go in this matter so that all hands must be on deck; we wish you more peace and prosperity without which the developmental work will be very difficult at the State level”.

He disclosed that President Muhammadu Buhari had recently launched a campaign, War Against Drug Abuse (WADA), not just as a slogan, but a call for civil action for all Nigerians at all levels to take active part in the war.