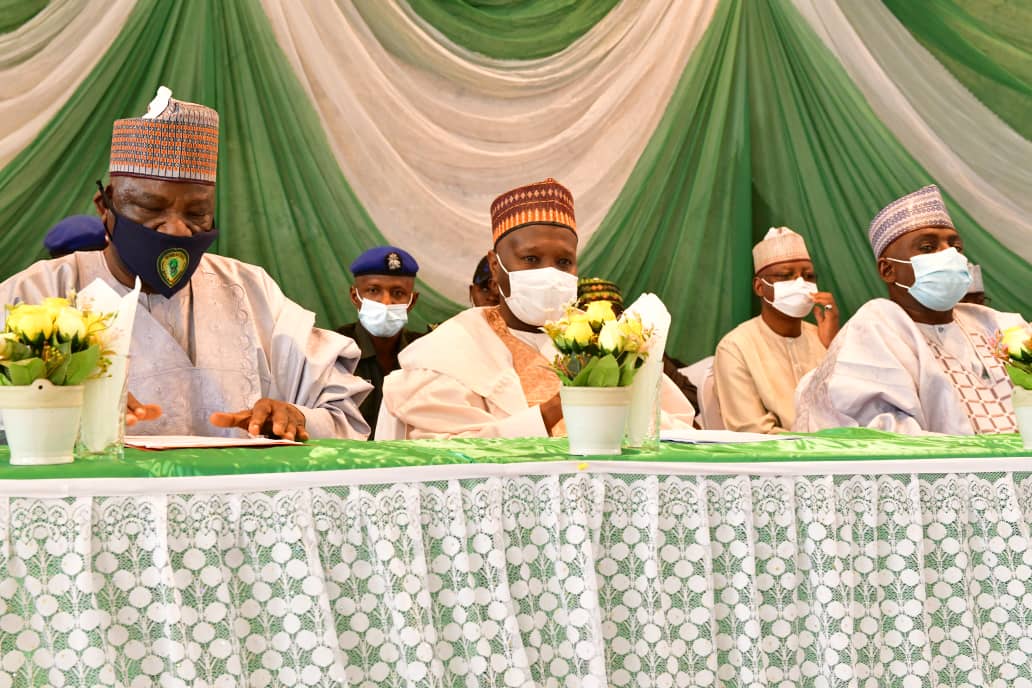 Governor Muhammadu Inuwa Yahaya of Gombe State has paid glowing tribute to President Muhammadu Buhari for initiating several intervention programmes for the economic upliftment of Nigerians especially the downtrodden in the society.

The Governor gave the commendation when he received the Ministers of Humanitarian Affairs Disaster Management and Social Development, Sadiya Umar Farouk and her Women Affairs counteroart, Dame Pauline Tallen at the Gombe Government House.

Both Ministers were in the State to flag-off the disbursement of twenty thousand naira (N20,000) grant to rural women in Gombe State, a gesture Governor Muhammadu Inuwa Yahaya described as apt in view of the economic hardship occasioned by the covid-19 Pandemic.

“Our rural women are indeed the backbone of the economy of Gombe State knowing fully well that about 80 percent of our people are peasant farmers and when you go to the villages you see the women more in the fields either the old ones or the young girls working and toiling day and night in order to maintain the families. So for us the support you are bringing to them is not small but very big .”

He said other critical interventions like trader money as well as other support that have been coming from the social investment office have succeeded in uplifting the living conditions of the people of the State.

Governor Inuwa Yahaya said his administration will continue to engage with both Ministries with a view to canvassing more support to the State.

Earlier speaking the Minister of Humanitarian Affairs, Disaster Management and Social Development, Sadiya Umar Farouk said she was in the State alongside her women affairs counterpart at the instance of President Muhammadu Buhari to flag-off the disbursement of N20,000 grant to rural women in the State.

She disclosed that the disbursement is carried out in collaboration with the office of the first lady of Gombe State as well as the State Ministry of women affairs and social development.

“Your Excellency you may recall that Mr. President has come up with different social investment programmes to alleviate the sufferings of our vulnerable groups all over the country”.

She said the intervention programmes of the Federal Government come in different components, one of which is the conditional cash transfer that the Government gives to poor and vulnerable households across the country.

Hajiya Sadiya Farouk said the 20,000 grant to vulnerable rural women which has the approval of the National Assembly is a one off gesture aimed at giving succour to rural women.

She thanked Governor Muhammadu Inuwa Yahaya for his support to the women fork, describing his disposition towards women activities as encouraging and worthy of emulation.

Also speaking, the Minister of Women affairs, Dame Pauline Tallen said women play a pivotal role in the life of every society hence the need to empower them and make them supportive Pillars to their families.

She said her office is working with the Ministry of Humanitarian Affairs as well as the National Assembly to reduce poverty among the vast majority of Nigerians.

She equally thanked Governor Muhammadu Inuwa Yahaya for always supporting the activities of women in the State and granting the request she earlier made when she came visiting less than a month ago that more women should be given space particularly in the forthcoming Local Government election in the State.