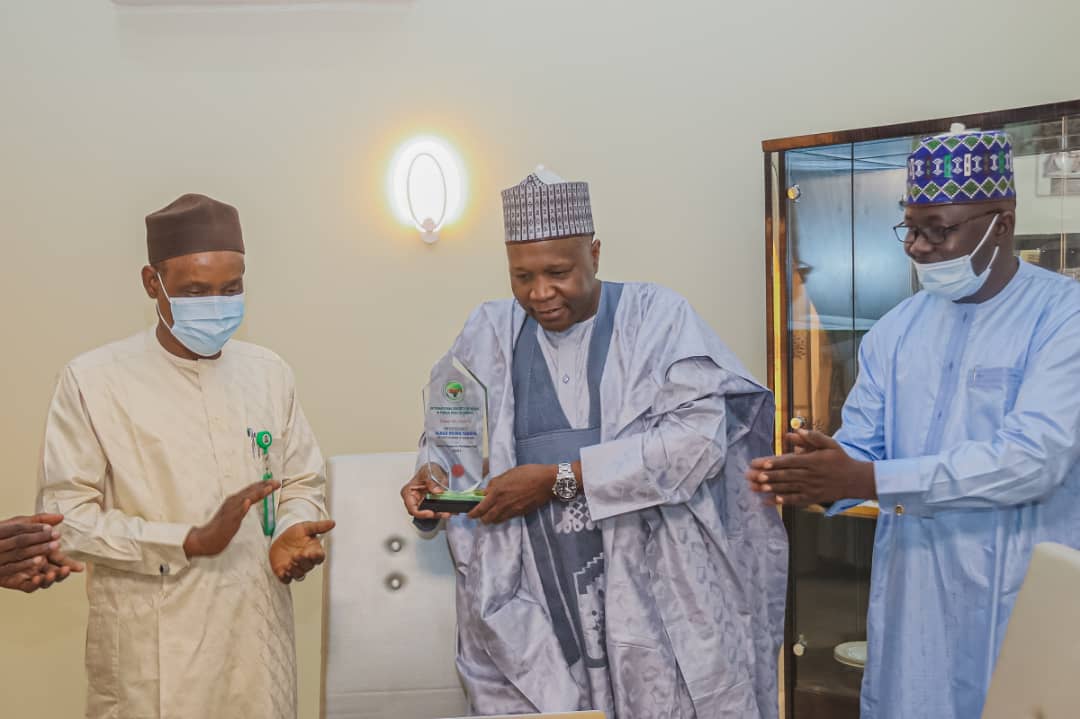 …Vows to End Malnutrition Menace among Children in Gombe State

Gombe State Governor, Muhammadu Inuwa Yahaya says his administration will spare no effort in ensuring that children in the State do not suffer the needless health challenges associated with malnutrition.

Governor Inuwa Yahaya stated this shortly after receiving an award as NUTRITION CHAMPION FOR THE NIGERIAN CHILD conferred on him by the International Society of Media in Public Health in recognition of his administration’s disposition towards tackling manace of malnutrition among children in the State.

The event held remotely yesterday, with Governor Yahaya participating via zoom from Bauchi where he went to attend the 4th North East Governors’ Forum meeting.

The Governor said his desire and passion to see children grow to their full potentials predated his present administration.

He however noted with dismay that inspite of the human and natural resources the State is endowed with, the incidences of malnutrition among children still persists to the extent that the State was classified as having a high degree of malnourished children.

“We have a lot of food products that we produce locally but somehow some where the state failed to utilize them properly for the benefit of the children so I became Governor I realized that we are still so backward on the issue and I took it upon myself to relate with development partners and agencies like yours in order to achieve the objective of giving proper nutrition to our children”.

He said his administration has so far gone into partnership with UNICEF to provide nutritious food to children through the timely payment of counterpart funding.

He said his administration has committed over 30 million naira in this fiscal year on direct production and that the State has gotten certification from NAFDAC which has since prompted the distribution of the Ready to Use Therapeutic food to various units within the Local Government areas so that children across the State can benefit from it.

Governor Inuwa Yahaya said the initiative is going to be a permanent solution to the malnutrition challenges in the State, noting that all the basic materials required like soya beans, maize, ground nuts, saseme are all available in the State.

“We have gotten the formula and the Technology Incubation Centre in Gombe has provided the basic machines required in order to continuously produce and I believe going forward Gombe will come to be listed out of those states that have the issues of malnutrition”.

He said the support and encouragement his administration is getting from the International Society of Media in Public Health is really encouraging, adding that Gombe State Government will continue to coordinate with relevant agencies and bodies so that the State and the entire country is taken out of the manace of malnutrition.

“Obviously the effect of insurgency has caused displacement and resettlement of people in places that are not their own, so that could bring a very big set back but nonetheless we shall not only stop at our own doors, we shall go out to support some of our colleagues from other states to make sure that they equally copy from us and going forward Nigeria is out of this problem”.

The Governor thanked the International Society of Media in Public Health for the award, saying he feels humbled by the honour done to him. He assured the society that the honour will spur him to do more in addreseing malnutrition issues in particular and the challenges in the health sector in general.
The Special Adviser to the Governor on Budget, Planning and Development Partners Coordination, Dr. Ishaku Mohammed also received an award from the same organisation for supporting the Governor’s drive.

The Executive Director of the organisation, Mrs Moji Makanjola while reading the citation of the Governor, lauded his excellency’s spearheading of a 10 year development plan which emphasizes HCD with a special focus on nutrition. She also acknowledged the Governor’s consistent provision of counterpart funds for nutrition issues to Development partners as well as his show of political will in tackling issues affecting the child.