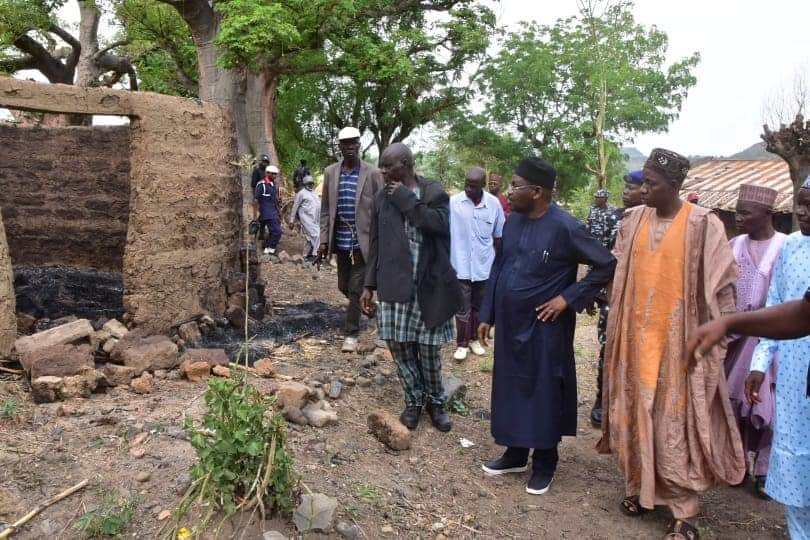 Gombe State Governor, Muhammadu Inuwa Yahaya has expressed deep concern over the renewed hostilities between the Lunguda and Waja speaking communities of Balanga Local Government Area of the State.

The Governor who sued for peace during the visit to the affected areas at Nyuwar and Gilengitu in company of heads of security agencies, warned for the umpteenth time, that his administration will not spare any person or groups bent on instigating violence and unleashing mayhem to achieve selfish desires.

He assured that perpetrators of the violence would be made to face the full wrath of the law.

Represented by the Secretary to the State Government, Professor Ibrahim Abubakar Njodi, the Governor observed that ” there is hardly any dividing line between the people of Lunguda and Waja in view of their long standing historical relationships covering critical areas like inter-marriages, cultural heritage and social ceremonies”.

He said his administration is deeply worried by the renewed violence, especially at a time when the rainy season is setting in for farmers to begin land preparation for this year’s cropping.

Governor Inuwa Yahaya explained that his administration has been diplomatic in ensuring amicable resolution of the Lunguda/Waja crisis in keeping with homegrown solution for peace. He however said the time has come for the government to deploy a new approach in dealing with the crisis which has so far claimed lives and properties worth millions of naira.

He called on the traditional and community leaders as well as the entire people of the area to cooperate with the government and security agencies deployed to ensure safety and security in their communities.

While at the Internally Displaced Persons Camp (IDPs) at Jessu where some of the victims are taking refuge, Governor Inuwa, who sympathised with them over the unfortunate incident, assured them of government’s immediate intervention to cushion their sufferings. He emphasized the need for the people of Lunguda and Waja to eschew violence in all its forms.

Earlier speaking, the district head of Nyuwar, Mr. James Pisagih appealed gor more decisive action in dealing with the perpetrators of the violence, saying ” Of course the Governor has done well in deploying security forces to maintain the peace but we are appealing to him as our leader to arrest and prosecute those instigating violence in this area”.

He said Nyuwar community has been under constant attack by individuals suspected militias from the neighbouring community who have so far “killed our people, destroyed our properties and means of livelihood of the people of this community”.

The traditional ruler expressed gratitude to Governor Muhammadu Inuwa Yahaya for his prompt response and sending a delegation to empathize with the people of Nyuwar, describing decision as a demonstration of examplary leadership.

In the same vain, the spokesperson for the Gilengitu community, Usman Adamu Sirja equally thanked Governor Muhammadu Inuwa Yahaya for showing empathy with the people of Gilengitu in their most difficult moment.
He however suggested that the opportunities for peace are within touching distance if the government can convoke a peace and reconciliatory meeting to clear grey areas bordering on farmlands and access to Government facilities.

At Jessu, the district head had while responding to Governor Inuwa Yahaya’s message of peace, called for concerted efforts to end the carnage, just as he appreciated the Gombe State Governor for his prompt response to quell the renewed hostilities.

It will be recalled that due to the perennial clashes between the Lunguda and Waja communities spread between Adamawa and Gombe states, the Governors of the two states Muhammadu Inuwa Yahaya and Ahmadu Umaru Fintiri had summoned a peace meeting in Numan, Adamawa state which brought prominent sons and leaders of both communities in their respective states where they discussed on ways to achieve lasting peace in both communities who are brothers from time immemorial. During the meeting, tagged the “Numan Peace Accord”, an agreement was signed for the rebirth of peace and sustaining it among Lunguda and Waja communities.