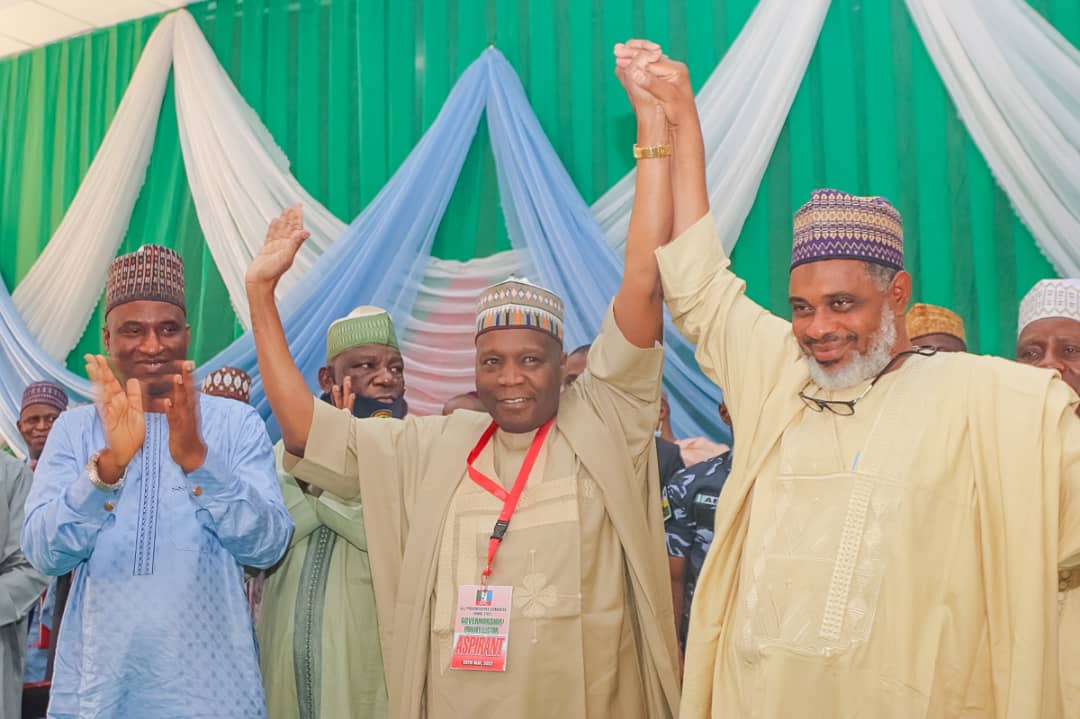 … Says ” Overwhelming Affirmation Will Spur Me To Deliver More Dividends of Democracy, Build On Successes Recorded ”

Gombe State Governor, Muhammadu Inuwa Yahaya has emerged as the All Progressives Congress, APC flag bearer for the 2023 gubernatorial election in the State.

Governor Inuwa Yahaya who stood as a sole aspirant in the APC primary election received an overwhelming affirmation through a voice vote of 563 accredited State delegates.

Dr. Danjuma Dabo observed that since Governor Muhammadu Inuwa Yahaya is the sole aspirant for the APC gubernatorial ticket in the State, it was needless to go through the rigours of balloting.

Dr. Dabo therefore, after following all necessary processes and procedures affirmed that,”by the powers confered on me by the constitution and guidelines of our great party, the APC, I hereby declare His Excellency, Governor Muhammadu Inuwa Yahaya as duly affirmed and elected flag bearer of the Party in Gombe State for the 2023 general election”.

In his acceptance speech, Governor Inuwa expressed gratitude to the Almighty Allah for giving him another opportunity to emerge as the APC flag bearer for the gubernatorial election in Gombe State and to continue to serve the people.

The Governor recalled that three and half years ago, an event in like manner was held where he was declared winner and subsequently received the cooperation and understanding of his fellow contestants, party leaders and supporters in the State.

“Inspite of the fact that it was a contest, yet we agreed to work together and produce this leadership that worked so hard to produce the results that prompted the good people of Gombe State to the extent that we are competing with no other person. I am the only competitor in this contest because already you have established that we as a people and as a government and a party are working as a team and family”.

He commended President Muhammadu Buhari, leader of the party, for “standing firm and for providing good leadership in Nigeria in this hard time that there is indeed a global challenge.”

Governor Inuwa also thanked members of his team for supporting and working hard to produce results that have convinced the people of Gombe State, assuring that the confidence reposed in him through the affirmation would spur him to deliver more dividends of democracy to the people.

He equally commended the national leadership of the APC under the chairmanship of Senator Abdullahi Adamu for effectively coordinating the affairs of the party in the most efficient manner.

The Governor assured the people of the State that the milestone attained by his administration which led to his overwhelming affirmation as the APC gubernatorial candidate will give him the inspiration and courage to face the challenges that lie ahead.

” I am convinced beyond any reasonable doubt that the people of Gombe State are really very supportive and are ready to go with us because we move hand in hand to achieve all that we have mentioned to you in our manifesto and we are working in accordance with the guidance and perseverance of the leadership of the people”.

Governor Inuwa Yahaya assured the delegates and party supporters that their efforts, unflinching support and loyalty towards his administration’s resolve to turn around the fortunes of the State will not go in vain.

Earlier in his address of welcome, the Gombe State APC Chairman, Mr. Nitte Amangal called on the delegates to conduct themselves in accordance to the party guidelines as they get set to affirm the party’s sole flag bearer.