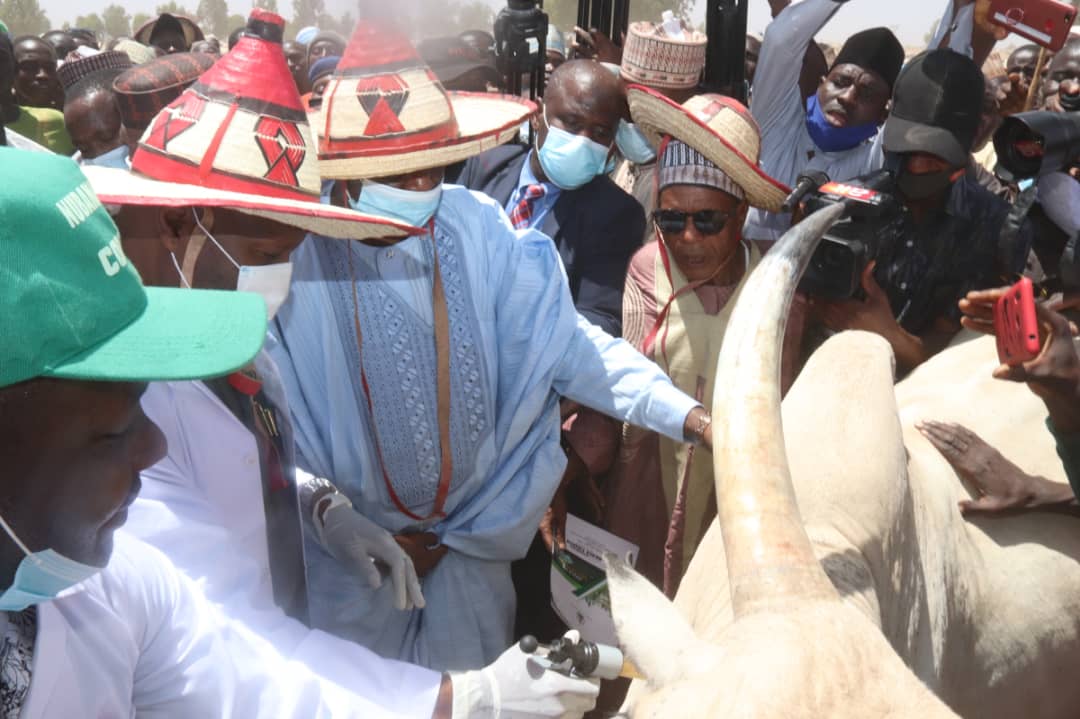 …Targets over 1 million Cattle for Vaccination

Gombe State Governor Muhammadu Inuwa Yahaya said inspite of pausity of funds, his administration has procured enough vaccines and other veterinary equipment for the annual Statewide vaccination campaign against contagious disease threatening the survival of cattle, sheep and goats in the State.

Governor Inuwa Yahaya was speaking at the flag-off of the 2020/2021 statewide vaccination campaign against contagious Bovin Pleuro-Pneuminia in cattle and other ruminants such as sheep and goats at Gadam Kwami local government area.

The Governor said the occasion demonstrates Government’s commitment to promote livestock production in the State by controlling animals trans-boundary diseases through vaccination campaign.

“Diseases such as Bovine Pleuro-Pneuminia (CBPP) and Pestes Des Petits Ruminant (PPR) are of great concern as they cause great economic lost to our farmers due to high mortality and therefore constitute a threat to the economy of our State”.

He said his administration’s effort is therefore geared towards the eradication of the trans-boundary animal diseases through massive vaccination campaign similar to the efforts made against rinder pest.

“I understand that the annual vaccination campaign has not been conducted previously but with the coming of this administration we developed processes that will ensure the continuation of the exercise in order to prevent setbacks in our collective effort to eradicate these diseases”.

Governor Inuwa Yahaya assured the people of the State of his administration’s commitment to sustaining the annual vaccination campaign in order to improve livestock production in the State.

He used the occasion to commend the Federal Government’s Livestock Transformation Plan towards boosting livestock production and controlling animal diseases across the country, calling on states to join hands in the battle as disease control is a collective battle.

Governor Inuwa Yahaya said such synergy will go a long way in enhancing livestock production in the State, thereby improving the socio-economic status of rural dwellers who are predominantly farmers.

He said to reduce the impact of these diseases on the rural pastoralists, women and children who own small ruminants as a form of asset to be used in times of needs, his administration has procured enough vaccines and other veterinary equipment for a holistic statewide vaccination exercise.

“My desire is to transform the livestock sub-sector in the State with the adoption of the National Livestock Transformation Plan through the establishment of a model at the Wawa Zange grazing reserve”.

He said efforts are underway to create employment opportunities and to ensure food security reduce poverty among teeming youths through the agricultural value chain, saying this will also go a long way to address the perennial conflict between livestock and crop farmers.

“It is my sincere hope that the exercise will galvanize livestock farmers to re-dedicate themselves to the development of the livestock sub-sector thereby improving livestock production in the State and the nation at large”.

Earlier in his address, the State Commissioner of Agriculture and Animal Husbandry, Muhammad Magaji said this is the first time since the creation of the State that a statewide annual vaccination of animals for two consecutive years running.

He said over one million livestock are projected to be vaccinated against the contagious Bovin Pleuro-Pneuminia CBPP in cattle and Pestes Des Petits Ruminant PPR in sheep and goats across the State.

He applauded Governor Muhammadu Inuwa Yahaya for providing all the consumables needed for a hitch free vaccination campaign and appealed to the Governor to give the nod for the Employment of more veterinary Doctors in the State.

The Director, Federal Ministry of Agriculture and Rural Development Dr. Musa Mohammed said the vaccination campaign is necessary for the survival and over all development of the livestock sub-sector in the State and by extension the country as a whole.

The State Chairman, Miyetti Allah Cattle Breeders Association MACBAN Modibbo Yahaya said since last year’s vaccination exercise, the Association has not reported any case of disease outbreak among its members.

He thanked Governor Muhammadu Inuwa Yahaya for his proactiveness and appealed to his compatriots to report any strange face or movement to the nearest security outlet for the prevention of any possible break down of law and order.