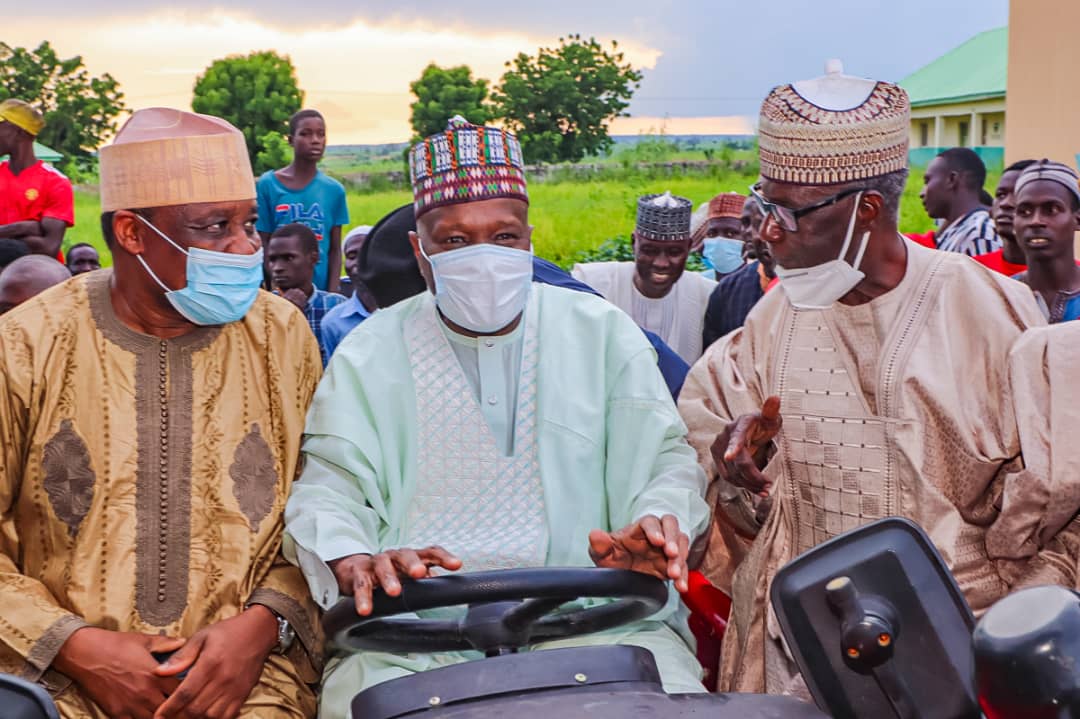 The Governor on Wednesday also performed the foundation laying ceremony for the construction of 500 mass housing units in Gombe metropolis.

The construction of the 500 housing units, to be built along Timothy Shelpidi way in Gombe, is an initiative of the North East Development Commission NEDC in conjunction with Gombe State Government to further bridge the housing deficit in the State.

Speaking at the event, Governor Inuwa Yahaya expressed gratitude to President Muhammadu Buhari for establishing the North East Development Commission whose mandate is to among others, rebuild the social, economic and infrastructural dimensions of the North East ravaged by the Boko Haram insurgency.

Governor Inuwa Yahaya observed that being at the centre of the North East and with the relative peace it enjoys, Gombe has been playing a comforting role to displaced persons that had to relocate to the State due to the consequential effects of insurgency.

“And the purpose of the setting up of the NEDC is to provide support and to ensure reintegration, rehabilitation and comfort to all those who have suffered as a result of the insurgency. In Gombe, though not in the frontline, we play host to a lot of displaced persons that come to live here; I think as at last count, about 75 thousand recorded families have relocated to Gombe and of these numbers, many have already integrated with our people”.

The Governor observed that the accommodating nature of the State has equally put a strain on its health and educational facilities as well as other service-providing agencies of the State and therefore appealed to the NEDC to increase the level of its intervention to the State.

“Of recent, Gombe State Government, on its own, enrolled 25,000 displaced persons and those that have various forms of disabilities on the State Contributory Health Scheme known as GoHealth and of these numbers no one will be charged a single kobo, meaning they are going to get health services free of charge”.

He assured the board and management of the NEDC that whatever it delivers to the State will be given to individuals in likes of IDPs and those with incapacitation who cannot fend for themselves.

The Governor said “Every food relief, health facility or intervention which you brought and all other support that you have been given especially the training of our youths will be utilized properly so that the prosperity of the people of the North East and those of Gombe State is really ensured and protected”.

The Governor urged the Commission to prioritise its approach to the deradicalisation and rehabilitation of Boko Haram insurgents who have surrendered to the Nigerian authorities so that their reintegration to the society will be guaranteed in peace and harmony.

“Above all, this initiative of house development at this critical and crucial time is really worth commending; I will like to thank you most profoundly and it is for that reason that this parcel of land that has been lying fallow for so many years has been committed to this project because we have the belief that whatever you promise you will deliver”.

The Chairman of the North East Development Commission, Major General Paul Tarfa said the mandate of the commission was to bring development to all the states that made up the North East sub-region, be it in education, road rehabilitation and food for the destitute among others.

He commended Governor Muhammadu Inuwa Yahaya for his giant strides in turning around the social,economic and infrastructural dimensions of the State, especially his noble Gombe Goes Green, 3G project which seeks to address ravages of climate change and global warming.

“Your Excellency you have done very well; anyone who comes to Gombe will see development even without going round, something has been done and something is being done. There are indeed signs of development everywhere”.

The Managing Director explained that through the support of the Gombe State Government, NEDC was able to deliver tractors, planters, fertilizers and other farm inputs to the newly constructed farm service centres across the State.

He said the commission has equally delivered to Gombe State, assorted food and non-food items for onward distribution to displaced persons and individuals in need.

He said the graduation of the Batch B of ICT programme of the NEDC is an indication that it is committed to building the capacity of young North Easterners for self reliance.

The event, which started with the foundation laying ceremony of the construction of the 500 mass housing units, also witnessed the flag off of the distribution of food and non-food items, commissioning and handling over of fully rehabilitated farm centres, tractors and other implements and graduation ceremony of batch B graduands of the NEDC/ICT training.