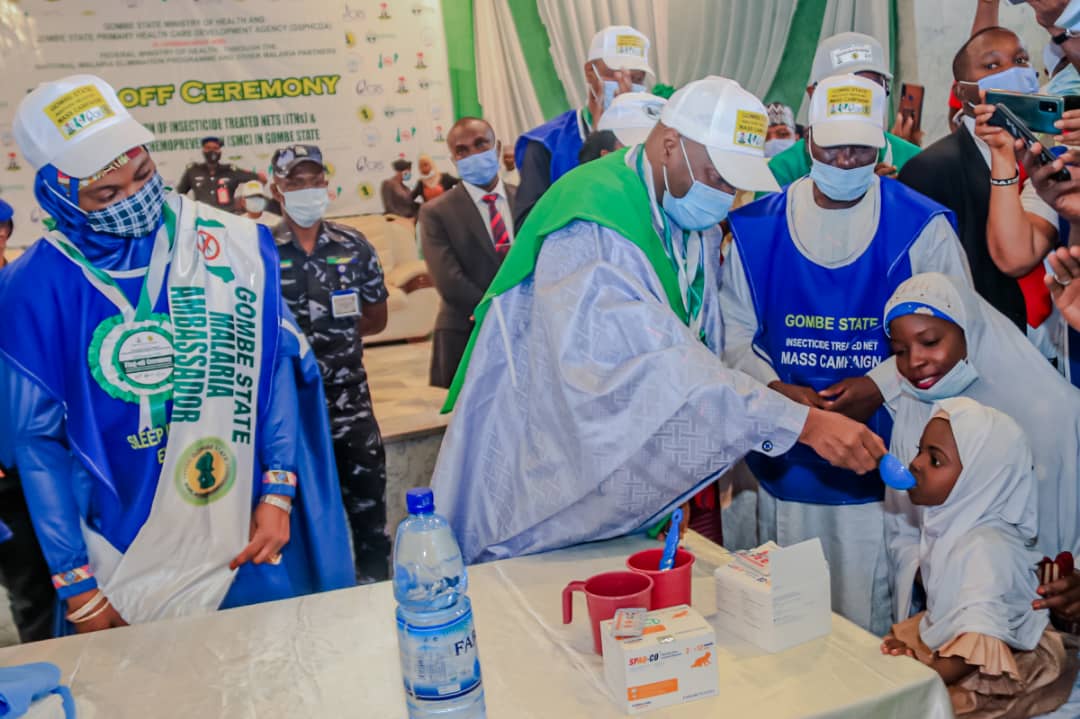 …Over 2.3 Million ITNs To Be Distributed Across Gombe State

Gombe State Governor, Muhammadu Inuwa Yahaya has flagged-off the distribution of Insecticide Treated Nets ( ITNs) and Seasonal Malaria Chemoprevention as part of ongoing efforts to eliminate the scourge in the State and the country in general.

Speaking at the ceremony, which took place at the new banquet hall of the Government House, Governor Muhammadu Inuwa Yahaya noted that Malaria has continued to be a public health challenge across the world but most importantly in sub-saharan Africa.

The Governor who noted that Malaria still poses a great threat to health and socio-economic wellbeing of the people, however expressed delight on reports indicating a decline in the number of deaths associated with the disease.

The Governor observed that the achievements was made possible due to the collective efforts of all partners especially those present at the flag off.

He said the Government of Gombe State, in partnership with the global fund will officially flag off the two campaigns that will signal the commencement of distribution of over 2.3 million nets to the people of State on a door to door basis using the same approach in administration of Sulphadoxin_Pyrimethamine + AmodiaQuine (Malaria Prevention Medicines)SPAQ to Seasonal Malaria Chemoprevention,SMC to 796, 988 children per month for the next four months that are of greater risk across the 114 ward spread in the 11 Local Government Areas of the State.

Governor Inuwa Yahaya remarked that the Gombe State Government has approved the use of its health facilities and deployed health workers for the successful implementation of the campaigns.

“The provision of affordable and accessible healthcare is one of the core priorities of this administration. This includes measures to control the spread of preventable diseases like malaria. In order to achieve this, Government has approved the use of over 580 health facilities, deployed over 2000 health workers and provided all the requisite financial and operational support to ensure the successful implementation of the malaria intervention campaign”.

He revealed that the State Government has fulfilled all its financial obligations in order to ensure a hitch free campaign.

The Governor used the occasion to appeal to philanthropists and corporate organisations to compliment Government efforts in Malaria control which must not necessarily be through finance but supporting interventions like donating long lasting Insecticide treated nets and sulphur doxine pherimetmine, S.P for intermittent preventive treatment for pregnant women, Chemicals indoor malaria spray and drugs.

“I wish to also thank the development partners who have worked and are still working tirelessly with the State government in other to ensure the smooth implementation of the campaign especially in the midst of the covid-19 Pandemic; the global fund malaria, National Malaria Elimination Program, the Catholic Relief Services the Chemonics and all other development partners”.

He said his administration is well aware that the investment by partners in the campaign has re-energized the State Government to continue to work through the State Ministry of health, State Primary Healthcare Development Agency and the Malaria Elimination Programme in order to ensure that malaria burden in the State is reduced and eventually eliminated.

He said according to the 2018 Nigeria Demographic and Health Survey, Malaria is known to be one of the leading causes of death particularly among children under the age of five and pregnant women.

“This disease over burdens the already weakened health system and exertes a severe social and economic burden on the nation thereby retarding the Gross Domestic Product GDP by 40 percent annually and costing approximately 480 million naira in out of budget expenditure for the people and lost of productive hours”.

The Minister of Health, Dr. Osagie Ehanire said Gombe State is one among the first set where ITN assessment campaign will be carried out in 2021 which will see the distribution of over 2.3 million nets in Gombe State.

Represented by Pharmacist Talatu Kassim Yahaya, the Minister said the Federal Ministry of Health and the National Malaria Elimination Programme, has since adopted the use of ITNs and SMC medicines as medication for eligible children as one of the key strategies for the prevention of malaria in the country.

This was why in recognition of her contribution to the fight against malaria in the State, the Gombe State First Lady, Hajiya Asmau Inuwa Yahaya was awarded and decorated at the occasion as the Net Campaign Ambassador for the State.

Reacting to the honour done to her, Hajiya Asma’u Inuwa Yahaya said as the Net Ambassador of the State she will explore different channels and resources to disseminate messages on the use of Insecticide treated nets so as to ensure that families protect themselves from mosquitoe bites by sleeping inside their nets every night.

Speaking through its Information Communication Technology Development specialist, the Catholic Relief Services, one of the leading implementing partners in the fight against malaria equally thanked the Gombe State Government for providing the enabling environment for the smooth implementation of the ITN campaign in the State.