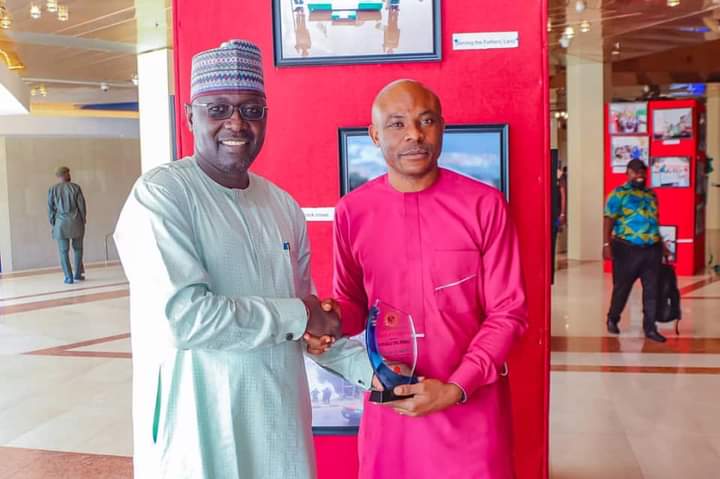 The Award ceremony took place at the Transcorp Hilton Hotel in the nation’s capital Abuja during PJAN’s photo exhibition with the theme “The Pandemic,  the Governance and the Image”.

Presenting the award, the Chairman of the Photo Journalists Association of Nigeria PJAN, Abayomi Fayese of the Nation Newspaper, said the ‘Icon of Humility’ Award presented to the quintessential Ismaila Uba Misilli was in recognition of his hardwork, competence, integrity and the mutual respect he always has for colleagues in the pen profession.

He said the association has been following activities of the Gombe DG Press as they effect image making service delivery and is satisfied with the dynamism and dexterity employed by Mr. Misilli in promoting the activities of his principal and the State as a whole.

” This award is in recognition of your humbleness and hard work in raising the bar of excellence in media relations in Gombe State “, he explained.

Responding to the honour done to him,  the Director General Press Affairs to the Gombe State Governor, Ismaila Uba Misilli thanked PJAN for recognizing his modest efforts, describing it as a motivation to do more.

He said the honour was not done to him alone but to the government and entire people of Gombe State.

He therefore promised to redouble his efforts towards promoting and projecting the life changing developmental activities of Governor Muhammadu Inuwa Yahaya in Gombe State.

Others are the Managing Editor of The Nation Newspaper, Northern operations,  Yusuf Alli and the Chairman, Nigeria Union of Journalists, NUJ, Abuja Chapter, Emmanuel Ogbeche among other notable figures.