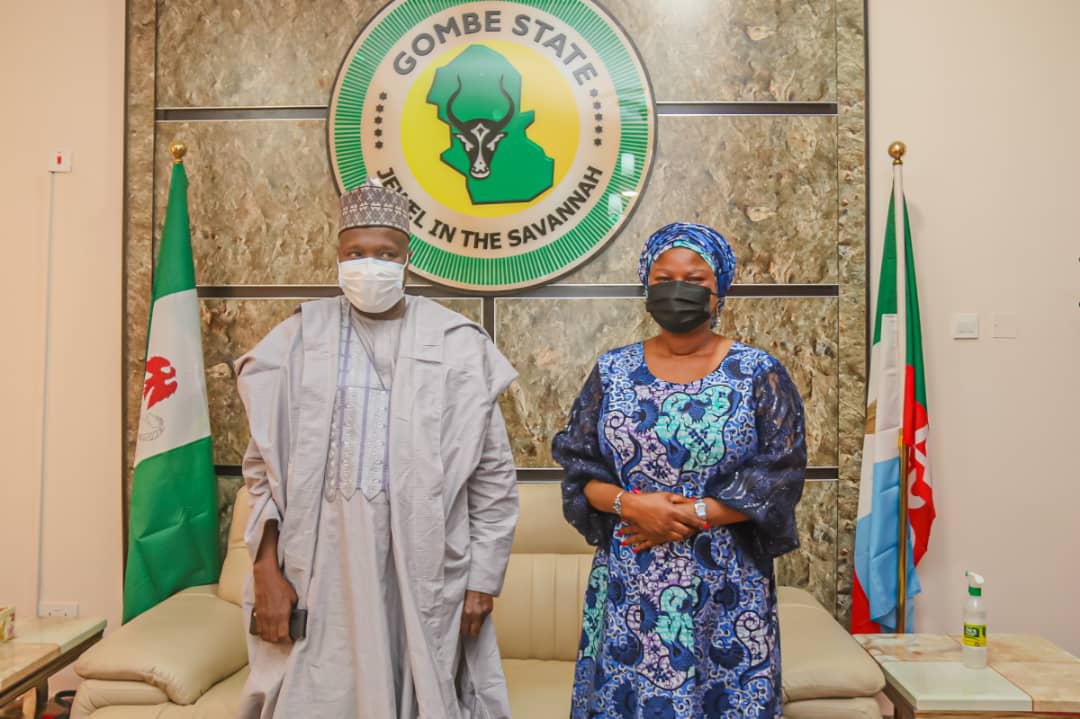 Governor Muhammadu Inuwa Yahaya made the disclosure during a meeting with the Senior Special Assistant to the President on Sustainable Development Goals (SDGs), Princess Adejoke Orelope-Adefulire at the Gombe State Governor’s Lodge in Abuja.

The Governor said Government Girls Secondary School Doma was selected for upgrade considering the vast land, strategic location of the institution and other factors.

“After a meeting with SSA to Mr President on SDGs, we agreed that two separate storey buildings with 12 classrooms each will be constructed in the school with each block having 6 classrooms at the upstairs and another six classes at the ground floor”.

He said aside from construction and equipping of classrooms, the intervention project will also provide a standard sporting facility which will comprise a football pitch and sports pavilion with a view to making the school more friendly for students.

“For the school to be more conducive for learning, the project will also provide basic amenities for students to have a stable mind in their academic pursuits, as such portable water will be provided and street light equipment will also be installed among other recreational facilities”.

Governor Yahaya added that a resolution was reached with the SDGs that Jauro Tudunwada Primary and Junior Secondary Schools located within the metropolis will also be renovated and upgraded with modern operational facilities.

He lauded the federal government/ SDGs’ intervention in Gombe, citing the construction of the nearly completed 120- bed capacity healthcare facility in Malam Inna and the ongoing multi million naira skills acquisition centre along Gombe state high court complex which if completed, he said, will empower teeming youths in the state.

Governor Yahaya said his request on the reactivation and upgrading of the Snakebite Treatment Hospital in Kaltungo and the plan to convert it into a full pledged research centre in partnership with the Federal Ministry of Health and the SDGs office was also discussed at the closed door session, expressing confidence that the raised issue will yield a fruitful result.

The Governor expressed appreciation to SDGs officials for the unrelenting support being accorded Gombe state and pledged his commitment in sustaining the harmonious relationship which he noted is already fetching development to his state.

While describing the meeting with the Governor as fruitful, the SSA to the President on SDGs assured that her office will remain resolute in supporting states that have governors with political will of bringing developments to their people as exemplified by Muhammadu Inuwa Yahaya.