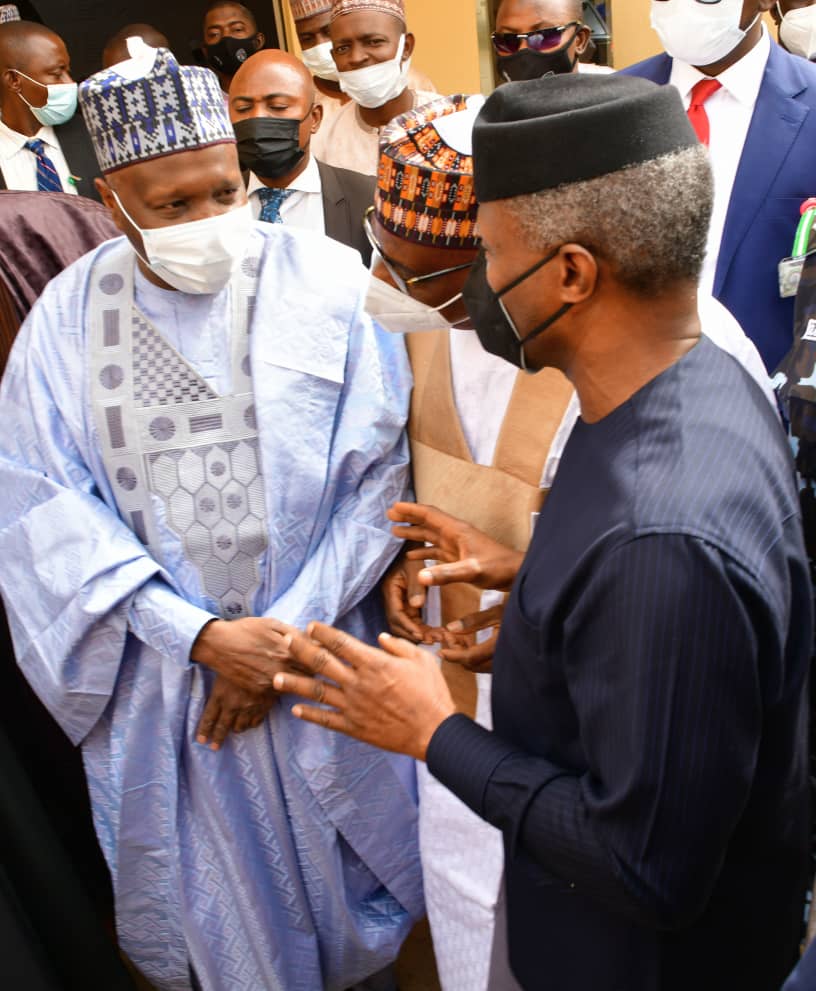 One of the areas of good governance that caught the attention of Vice President Prof. Yemi Osinbajo during his recent visit to Gombe is Governor Muhammadu Inuwa Yahaya’s passion in harnessing the huge human capital in Gombe for socio-economic development of the State.

Prior to the Vice President’s visit, Gombe State has been a hub of trade, commerce and agricultural activities in the North Eastern Nigeria.

The indigenes fondly referred to as ‘Gombawa’ are a legendary hardworking and industrious people.

The Vice President took note of the exemplary and advantageous use to which Governor Yahaya is putting the human capital resources of the state, especially in the MSME sector.

The comparative advantage of abundant human capital which the state has over the surroundinng neighbouring states invariably makes it the commercial nerve centre of North East sub region.

Over the years, Gombe State human capital capabilities, seen as a catalytic assets, were largely ignored by past administrations in the state.

In addition to the humongous human capital assets in the state,Gombe also boasts of other factors of production and natural resources endowments. Agricultural and mineral deposits are in commerciallly viable quantum to engage the human capital. Gombe State is home to one of the biggest agricultural commodities market in the country (The Tudun Hatsi) and the famous Dadinkowa Dam with 40 megawatt capacity hydropower plant designed to provide electricity and water for irrigation and aquaculture.
Gombe has a thriving mega market. The Gombe Main Market which stretches on a long street in the Metropolis is unarguably one of the biggest markets in the north east. There is also the industrial cluster in the British Cotton Growing Area, BCGA, the Gombe Cattle Marketn the tomatoe market and many others which currently provide employment to hundreds of youths across the State.
Although the state was wading through numerous challenges, the emergence of the administration of Governor Muhammadu Inuwa Yahaya on May 29th 2019 rekindled the hope of a rapid economic transformation. The expectation is perhaps borne out of the fact that Governor Yahaya is perceived as someone, who having lived all his life in Gombe and successfully built his business structures and networks, would naturally ease the state into an era of economic growth and development. The Governor is reputed to have an uncommon, but better understanding of the challenges confronting MSMEs in the State, as well as the strategic model to galvanise available resources for the overall benefit of the people of the State.

One of strategies put in place by Muhammadu Inuwa Yahaya is the repositioning of the MSME subsector. To achieve the repositioning agenda, a bill for the creation of the Gombe State Enterprise Development Agency has been in the House of Assembly for consideration and subsequent passage.
When created, the Agency is expected to drive MSME development in the State by harnessing the enormous potentials of all the small and medium scale businesses across various economic and social sectors.

Similarly, the administration of Governor Muhammadu Inuwa recently launched 10-Year Development Agenda for Gombe State, the first ever by any governor in the state.The Development Agenda identified the MSME subsector as an important driver of economic and social advancement. It is a historic development.
Under the leadership of Inuwa Yahaya, the Gombe Industrial Park project has been initiated. When fully operational the Industrisl Park will take advantage of the enormous potentials in hydropower, oil and gas, agriculture and solid minerals resources in the State to accelerate the economic growth of the state.

A commensurate effort aimed at boosting human capital development has propelled the administration of Governor Muhammadu Inuwa Yahaya to invest in the revitalization of the health and education sectors.

The Governor is aggressively equipping the teeming population of young men and women with the skills and qualifications necessary to succeed in the 21st century.

These efforts of Governor Muhammadu Inuwa Yahaya in boosting economic activities in the State caught the attention of Nigeria’s Vice President, Prof. Yemi Osinbajo who observed with satisfaction that the State has been actively engaged in ensuring that its citizens benefit from MSMEs related schemes. Thus, Governor Muhammadu Inuwa Yahaya was commended highly by the visiting Vice President for championing the course of human capital development through economic activities in the State.

The Vice President noted that despite the huge challenges facing Gombe State, the administration of Governor Muhammadu Inuwa Yahaya was able to ignite the ‘can do spirit’ of the people of the State through policies geared towards developing Micro, Small and Medium Enterprises in the State.

The Vice President who was at the 27th edition of the National Micro Small and Medium Enterprises MSMEs held in Gombe State recently, said “Thus far in the payroll support for Gombe State, we have ensured that about 9085 employees, from close to 2000 MSMEs in the educational sector have benefited from the scheme, another 10,000 artisans and transporters have also benefited from this State, up to 6000 new business names have been registered free of charge with CAC from businesses that are in the State. In all, MSMEs, in Gombe State has been supported by the Federal Government with almost 1.2 billion naira under the economic sustainability plan”.

On his part, Governor Muhammadu Inuwa Yahaya said the hosting of the 27th Edition of the National MSME Clinic is an important milestone in the development of the local economy in Gombe State, as it is expected to facilitate the development of small-scale enterprises by serving as a one-stop-shop for all MSME-related information, bringing together all relevant stakeholders, promoting the production and consumption of locally produced goods and services”.

Governor Inuwa Yahaya said the clinic will also help small and medium scale businesses to which he holds so dear to his heart in areas of improving access to finance, business registrations, access to market, skills acquisition and compliance with regulatory requirements, alongside other reforms around ease of doing business, adding that his administration is working to create a conducive environment for small and medium enterprises to thrive and succeed.

“The choice of Gombe State for the 27th MSME Clinic is both apt and timely. We are blessed with an economy that is driven by enterprising and hard-working young men and women. No wonder the British Historian, Dr Mary Tiffen, aptly described the people of Gombe as “The Enterprising Peasants” in her seminal book on the history of Economic Development in Gombe (1900—1968). Added to the uniquely favorable conditions for individual enterprise, our strategic position at the center of the Northeast subregion puts us at the heart of the regional trade, commerce and agriculture”.

Governor Muhammadu Inuwa Yahaya has been observed by opinion leaders to be gradually attaining the status of a trailblazer in his burning desire to build human capital for shared prosperity. His relentless efforts towards repositioning the Micro Small and Medium Enterprises MSMEs in Gombe State is one that will certainly outlive his tenures and the benefits to the people of the State will no doubt last for many years to come.