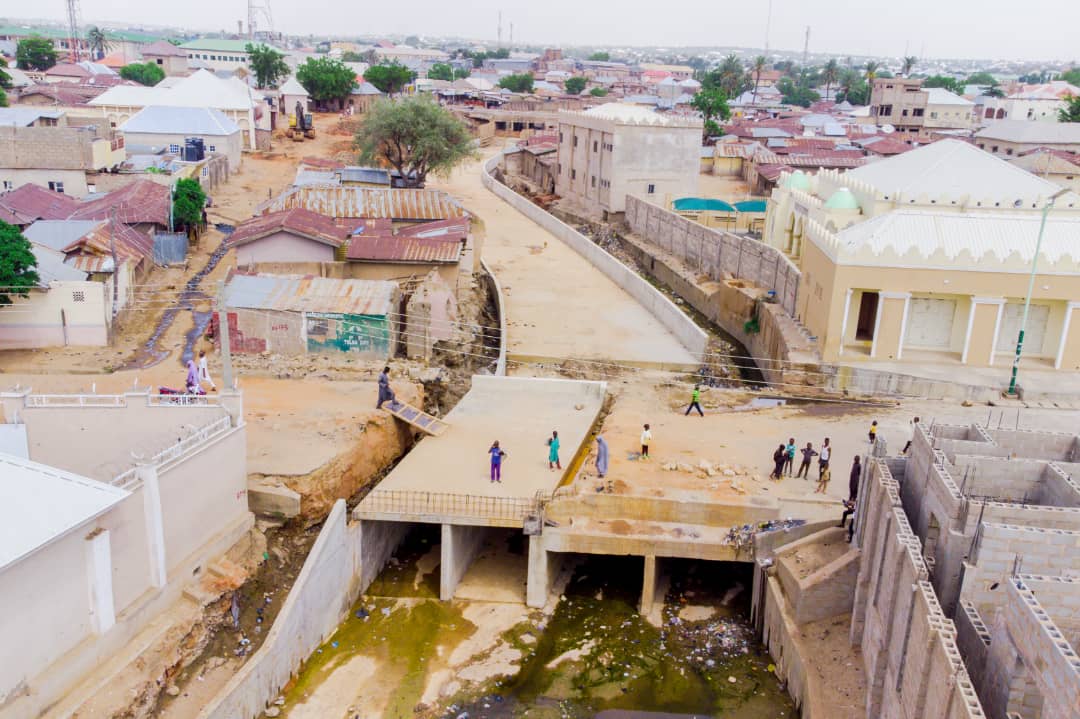 Gombe State Governor, Muhammadu Inuwa Yahaya has inspected the ongoing gully erosion control and roads projects being undertaken by his administration in some areas of the state capital.

The places visited included the gully erosion control site at Herwagana and the 4.5km Idi-Unguwa-Uku-Malam-Inna-Kagarawal road.

At the erosion control site in Herwagana area, the governor noted that the menace of the removal of soil along drainage lines by surface water runoff has been one of the serious environmental problems affecting the state capital causing destruction of properties worth millions of Naira and disruption of businesses. This, he said, “prompted our government to come to your rescue and save the situation”.

The governor explained that there are more than 200 active gullies across Gombe State and most of them are within the vicinity of the state capital.

” You’ll recall that we had already executed the Gombe State University-Malam Inna erosion control works in collaboration with the Nigeria Erosion and Watershed Management Project, NEWMAP with a view to addressing severe Gully Erosion problems in the short term, reduce vulnerability to soil erosion and climate variability in the medium term, such as our aforestation programme, the Gombe Goes Green Project”.

He promised to continue to work in collaboration with other development partners to address the problem of gully erosion in the state. 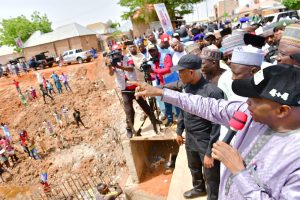 “we shall continue to work in collaboration with World Bank and Federal Ministry of Environment to address the problem of gully erosion and other related problems in Gombe State”, he vowed.

He warned people against indiscriminate dumping of refuse in drainages to avoid flooding and other related consequences.

“People should avoid building houses or erecting structures on water ways and also stop the attitude of dumping refuse in the drainages. This obstructs free flow of water which may result into catastrophic flooding”, he warned.

The governor promised to construct a linking road parallel to the gully erosion site to ease movement of goods and services in the area.

Earlier speaking at the gully erosion site, the Commissioner of Works and Transportation, Engr Abubakar Bappah revealed that the gully in the area started expanding rapidly after the 2004 catastrophic flood that affected many parts of the metropolis . “Unfortunately, this problem did not receive the deserved attention until the coming of this administration”, he noted.

Responding on behalf of the benefiting communities, An APC stalwart, Alhaji Kawu Adamu Dan Malikin Gombe thanked Governor Muhammadu Inuwa Yahaya for coming to their rescue at a time when their communities were battling with acute shortage of social amenities and environmental challenges. They pledged continued support to the good policies and programmes of Inuwa Yahaya-led Administration.

The governor also inspected the ongoing 4.5km Idi-Unguwa-Uku-Malam-Inna-Kagarawal Road initiated by his administration which has reached a considerable level of completion.

Speaking at the road site, Governor Inuwa expressed satisfaction with the speed and quality of the project.

“I am very impressed with the quality and speed of the work. In fact, the contractors have performed beyond expectation. With this rate, I am hopeful that the project will be completed in the next two months”, he said.

The governor cautioned the citizens to desist from illegal encroachment on right of ways, maintaining that it is on this pavements that other facilities such as streetlights and water pipes will be installed for the benefit of the people.

He urged the benefiting people to take ownership of the projects and safeguard them from anything that may affect their usefulness to the communities.