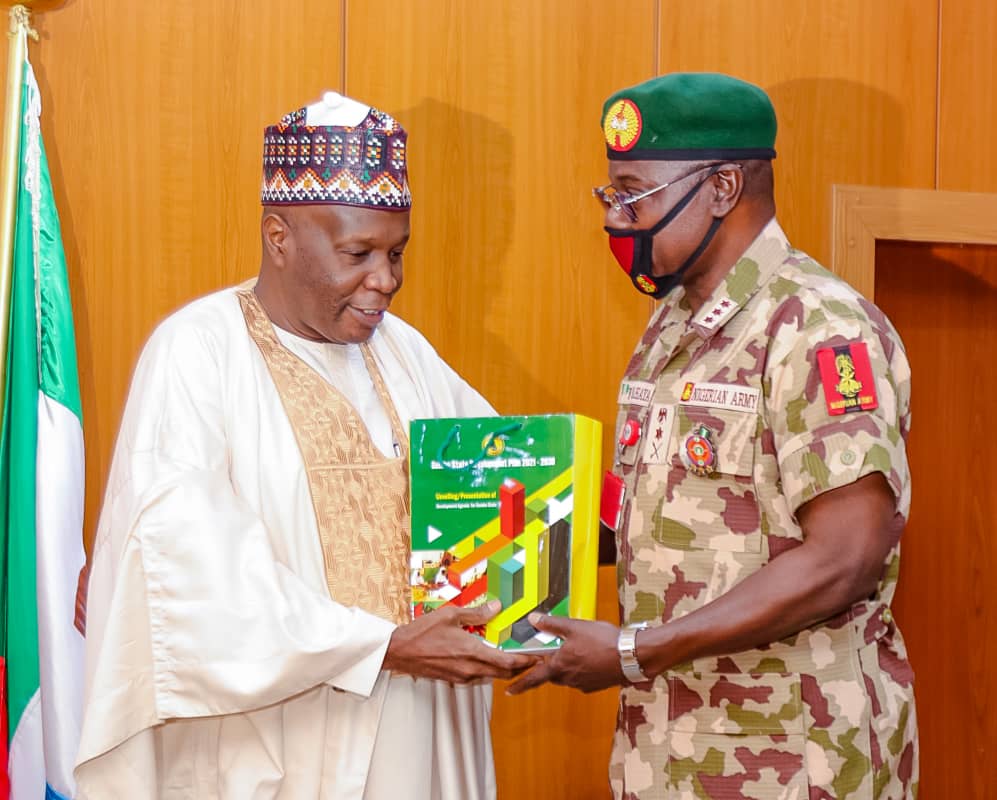 Governor Muhammadu Inuwa Yahaya said his administration will not relent in working in synergy with the Nigerian Army and other security agencies to maintain and reinforce the prevailing peace in Gombe State.

The Governor stated this when he received the Chief of Army Staff, Lieutenant General Faruk Yahaya who paid him a courtesy visit at the Government House, Gombe.

He stressed the need for a symbiotic relation between Gombe State and the Nigerian Army to further promote peace and security in the State.

Governor Yahaya lauded the key role of Nigerian armed forces in peace building across the geopolitical zones of the federation.

“I must admit that the presence of the Army gives us a great sense of security and stable mind because the greatest sacrifice that you made to even join the force means that you are there to protect Nigerians against all odds and at all cost; so we appreciate you and we shall continue to do so for what you are doing to the Federal Republic of Nigeria”.

The Governor tasked the Chief of Army Staff to expedite action towards the relocation of the 301 Army barracks to its permanent site, stressing that while the military does its part, the State Government is equally providing substantial amount of support to see to the quick and easy movement of the Army base.

“I believe by the time you move there with full facilities, may be it will turn to be a Brigade instead of Artillery Regiment and that will help even the Nigerian Army because of our central location”.

He said the presence of the Army in the State will go a long way to compliment the efforts of the Government and the people in order to ensure peace and harmony as well as security and safety within the State.

“In addition, as you may recall we spoke on the issue of the operation safe corridor and I revealed to you that the Chief of Defence Staff had sent a request for us to acquire an additional space for the training and retraining of those that have been deradicalised and integrated into the society. Gombe has sacrificed so much and we shall continue to do so. And in that vein, we are equally looking up to the Federal Government to sort out the issue of finding a permanent NYSC camp because we sacrificed our orientation facility, Mr President has given approval for us to be reimbursed unless it is done we cannot say it is done and I urge you to support us in that regard”.

Governor Inuwa Yahaya pledged the commitment of his administration to supporting the Nigerian Army in all aspects of its requests, maintaining that the presence of the Army anywhere in the country guarantees peace and security.

While reiterating the hospitality of the people of the State, Governor Muhammadu Inuwa Yahaya said the appointment of Prince Chimack Ewuzie as a Special Adviser on inter community relations buttresses that the people of Gombe are welcoming to all well meaning Nigerians.

Speaking earlier, the Chief of Army Staff, Lieutenant General Farouk Yahaya said he was in the state in furtherance of his operational and assessment tour of formations and units of the Nigerian army , across the country.

He commended the Government of Gombe State for its proactiveness and commitment in maintaining the peace in a zone that is bedevilled by security challenges.

Lieutenant General Farouk Yahaya rhanked the Governor of Gombe State for not only appropriating a large portion of land for the construction of the permanent site of the 301 Artillery Brigade Barracks but also providing water to the new Army base.

He equally expressed gratitude to Governor Inuwa Yahaya for being the first state chief executive to visit and wish him well at the Army Headquarters when he was appointed the Chief of Army Staff.

He said the Nigerian Army is determined to end all forms of criminality in the country, calling on the people to partner the armed forces towards achieving the goal.

“It is our efforts to synergise with all stakeholders so that together we can improve the situation; security is everyone’s business, we all have our roles and responsibilities. On our part, we shall continue to improve on what we do and collaborate with other services and civil authorities”.