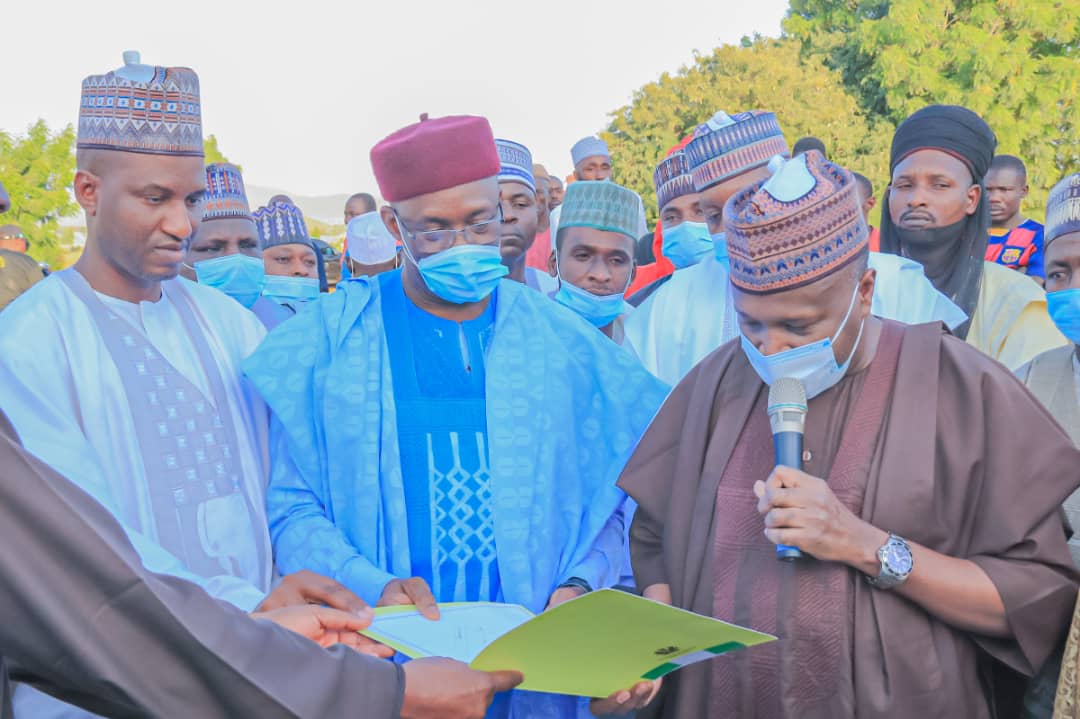 Gombe State Governor, Alhaji Muhammadu Inuwa Yahaya has handed over a piece of land along Gombe-Yola bypass to the Nigerian National Petroleum Corporation (NNPC) for the construction of a 200- bed capacity hospital and a diagnostic centre.

Presenting the signature plan and title documents of the land to the Group Managing Director of the NNPC, Mele Kyari, represented by the Group General Manager, Frontier Exploration Service, Engineer Abdullahi Bomai, Governor Inuwa Yahaya noted that the symbiotic relationship between his administration and the NNPC is yielding positive results for the benefit of the citizenry with the latest gesture through the corporation’s corporate social responsibility programme.

He explained that the moment his administration attracted NNPC’s interest to construct the 200- bed capacity hospital, the thought of where to site the facility for the best interest of the people came to his mind, adding that the decision to situate it along the Gombe bypass was consequent upon the fact that no Government health facility is located along the route which houses a large number of people including IDPs who are more vulnerable to covid-19 virus and other illnesses.

“This place is quite adequate because what you requested for was 4 hectares but this is 5.4 hectares of land, so you have extra space to do more and I hope and pray that as I present this to you, next week we shall see activities being carried out here”.

He commended President Muhammadu Buhari for showing interest in the exploration and exploitation of oil and gas in the state and the larger Gongola Basin.

“So I want to use this opportunity to thank most profoundly Mr. President for giving adequate attention and for his political will and commitment with regards to the exploration of oil and gas in the North East sub-region”.

The Governor also appreciated the Minister of State for Petroleum, Timipre Sylva, Group Managing Director of the NNPC, Mele Kyari as well as the Frontier Exploration Division of the Corporation for ensuring that Gombe state benefits from natural resources God has endowed it with.

“Of recent the NNPC injected a lot of resources and so far two oil wells have been drilled from which a significant quantity of oil that is commercially viable has been found in the Kolmani area which is located in Akko Local Government Area, precisely in Pindiga Emirate”.

Governor Yahaya said when the issue of oil exploration began in the state, he had on several occasions visited the corporate headquarters of the NNPC and also met with President Muhammadu Buhari to interface with them on how best the state can benefit from the oil exploration, stressing that only recently he was with the GMD of the Corporation where several issues were discussed, top of which is the construction of the 200- bed capacity hospital in Gombe.

“We want to commend the NNPC, in particular the Group General Manager Frontier Exploration Service for all the effort they have been putting in to align Gombe State to the league of oil producing states in Nigeria, so far I can say so very good”.

Responding, the Group Managing Director of the NNPC, Mele Kyari, represented by the Group General Manager, Frontier Exploration Services, Engineer Abdullahi Bomai thanked the Government and people of the State for supporting drilling operations of the NNPC.

“Since we started operations in Gombe State we have not recorded a single incident either of security or community disturbance. For this, the NNPC is quiet happy and appreciative of this rare show of support we are receiving from the people of the State”.

Group General Manager Frontier Exploration Services of the NNPC said top management of the NNPC approved the construction of the hospital and a diagnostic Centre in the State to complement the transformational drive of Governor Muhammadu Inuwa Yahaya in the health sector, stressing that the gesture was part of the Corporation’s corporate social responsibility.

The Emir of Gona in a vote of thanks, lauded Governor Muhammadu Inuwa Yahaya for his political sagacity in influencing the setting up of the hospital in the State and the NNPC for its magnanimity in partnering with the Gombe State Government.