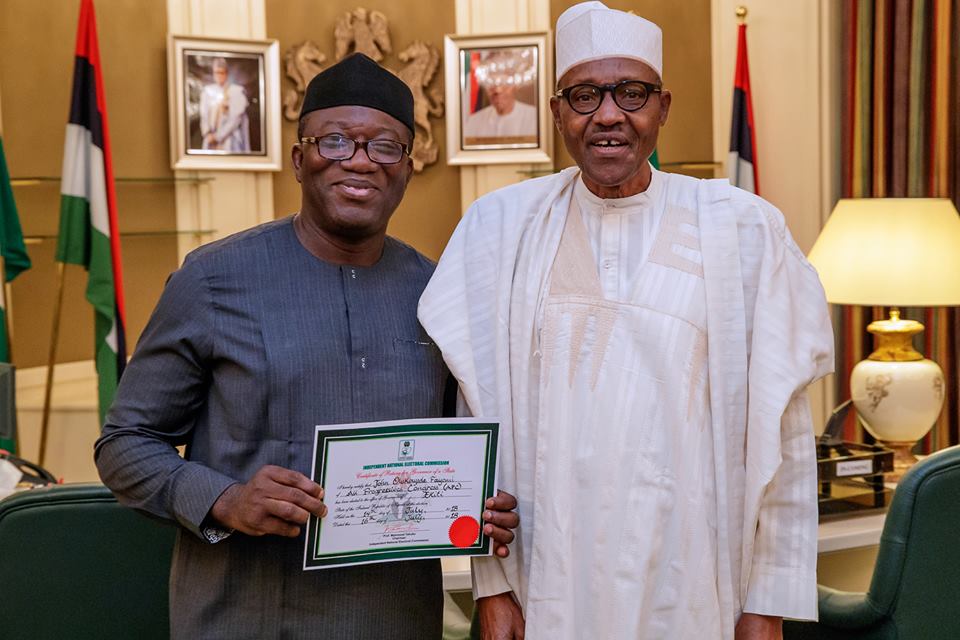 Ekiti State Governor-elect, Dr Kayode Fayemi, on Thursday, said he would probe what transpired in the last four years in the state under the outgoing governor, Ayodele Fayose.

He said it was in the interest of good governance for him to investigate how much accrued to the state and why salaries were not paid.

Fayemi said this in an interview with State House correspondents shortly after he met President Muhammadu Buhari at the Presidential Villa, Abuja.

The former Minister of Mines and Steel Development seized the opportunity of the meeting to present his certificate of return issued by the Independent National Electoral Commission to the President.

Although he said he would look into the state’s books, Fayemi also said it was not all about probing Fayose or his deputy.

He said the idea was to ensure that mistakes of the past were not repeated.

He said, “l think we need to remove this election from personalities. This was an election that we fought on issues and it will be irresponsible on my part to come here and say that we will not examine what transpired in the last four years in the manner of government.

“What was received in Ekiti State and the expenditures in that period, why were we not able to pay salaries in the state? These issues should be examined in the interest of good governance.

“It is not about probing Fayose, probing Eleka etc. It is about not repeating the mistakes of the past and giving our people good government. So, we will also involve in looking at what transpired in the last four years.”

Fayemi said he was already busy with activities related to the transition period in the state.

As part of putting his government together, he said he would be looking at the state’s assets and liabilities.

Meanwhile, Fayose, has challenged Fayemi to begin the probe of his government now instead of waiting till October 16 that he will be sworn in.

The governor advised the governor-elect to seek legitimacy for his election first rather than embarking on a vendetta mission that would consume him.

Fayose, through his Special Assistant on Public Communications and New Media, Lere Olayinka, said this in his reaction to Fayemi’s threat.

“It is obvious that he will be consumed in his vendetta mission and rather than grandstanding, Fayemi should first seek legitimacy for his stolen mandate,” he said.

“He (Fayemi) should stop living in the world where the threat of probe scares people because we, in the government of Fayose, are not afraid of victimisation and vendetta that Fayemi is obviously coming with.”

Fayose described Fayemi as a beneficiary of a stolen mandate who was afraid to even come to the open to celebrate his “false victory.”

“Even yesterday (Wednesday) when he went to collect the certificate of the mandate that was snatched and handed to him by the powers that be in Abuja, he had to be protected by a police helicopter and hundreds of armed policemen. One wonders how he is going to rule the people they forced him on.

“If Fayemi is on a vendetta mission, which is obvious that he is, he will first destroy himself because like Ekiti and its people survived him during his first tenure, the people will outlive him this time too.

“During his first tenure, he probed the government of Segun Oni and said he (Oni) should refund N5.4bn to the state government account.”