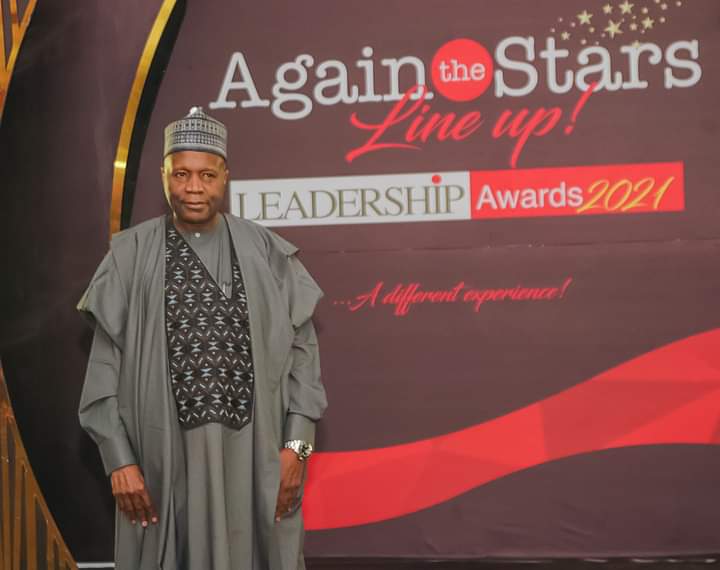 “We are what we repeatedly do. Excellence then, is not an act, but a habit.”Aristotle, Greek Philosopher

The utility of the above summation by the great Aristotle emphasizes the need for political leaders to, above all, recognize the prime essence of performance and excellence for posterity while in public office rather than being consumed by the flame and obsession of politics. This is indeed the disposition of Gombe State Governor, Muhammadu Inuwa Yahaya (Dan Majen Gombe).

It is a well known fact that everywhere in the world, awards are given to individuals who have distinguished themselves either as leaders or professionals in their chosen fields of endeavours. Since coming into office, Governor Inuwa has received so many awards and recognitions, including that of Business Day, Blueprint and Daily Independent newspapers.

However, two of the most recent awards bestowed on him readily come to mind. These awards are the ones by Leadership newspaper which he personally received and recognized the Gombe State Governor as the 2021 Leadership Governor of the Year and Vanguard newspaper which declared Inuwa Yahaya as its 2021 Personality of the Year under governors’ category. Both high profile recognitions came almost in quick succession in brazen admittance of Governor Inuwa’s giant strides in the social, economic and infrastructural development of the state. So what are these clinical deliverables that the two national dailies saw in Governor Inuwa Yahaya to warrant the honours? For Leadership newspaper, the award was premised on the governor’s leadership acumen which has always been tailored towards repositioning Gombe State on the path of sustainable economic growth, rebuilding the state’s decrepit infrastructure, constructing roads which spread across the state, providing job opportunities for youths and women as well as empowering the people of the state with his agricultural transformation agenda.

Leadership newspaper recalled that on assuming office on May 29, 2019, Governor Yahaya was not new to the challenges facing the state, having meritoriously served as the state’s Commissioner for Finance and Economic Development. He left no one in doubt that he already had his job well cut out for him: to propel Gombe State towards the path of rapid development.

The cumulative effect of Governor Yahaya’s prudence, leadership character and credibility is the coming of various development partners to the state, and the results are so far remarkable. Gombe is now the best state in the ease of doing business in Nigeria and has been adjudged the safest and most peaceful state in the North-East geopolitical zone.

As for Vanguard newspaper, the tabloid recalled that after about 25 years of existence, Gombe State, the Jewel in the Savannah, is now clearly set on the path of a new dawn under a transformational leadership of Governor Yahaya.

The current administration which ushered in the new era is barely two and half years old when the impact of transformational leadership began to gain traction while Vanguard Newspapers findings show strong foundation for a sustained growth across the socio-economic landscape of the state in the medium and long term.

Vanguard maintained that most governance analysts have often excused many governments’ failures on the premise of the impact of COVID-19 on the national and sub- national economies, but Gombe seems to have created a different narrative; that challenges berth creativity and ultimately superlative performance.

According to Vanguard Newspaper, Governor of the Year awards go to few selected state governors that managed to distinguish themselves in the circumstances of the operating environment.

Vanguard Newspaper findings show that upon assumption of office, the administration was confronted with a treasury in distress, burdened with about N124 billion in Loans/Bonds, Pension/Gratuity arrears and contractors’ liabilities.

The fiscal stress could be gleaned from the recurrent obligations amounting cumulatively to about N900.4million monthly to service the liabilities.

But the administration has gone ahead to demonstrate determination to achieve positive results.

But Muhammadu Inuwa Yahaya chose the road less travelled. Determined to salvage and possibly turn-around the tax payers’ money into viable assets, the administration embarked on completing those projects.

Already, the Mega Motor Park is costing the state about N3billion to complete and when Vanguard Newspaper visited the location, extensive work was ongoing to get the park ready for commissioning. The project was one of the several of such that compelled the current administration to draw up a well thought out robust financial plan to deal with the fiscal implications.

Prior to the advent of the current administration, the 11 local government areas of the state had to borrow N1.3billion monthly to pay salaries. The Yahaya administration had, within the first three months of its coming into office, stabilised the LGAs financially and are now able to pay their salaries and pensions as at when due on their own.

Governor Inuwa Yahaya also believes a good network of roads is critical to the economic revival and development of the state. Being an agrarian state in spite of the ongoing ambitious work to industrialize the state, we have come to see a new Gombe where the various parts are now well linked up via good roads, starting from the initial Network 11-100 Project, (100 kilometers of roads in each of the 11 local governments) to the mega revolution in the construction of over 150 other strategic roads across the state till date. Some of the road projects include: the 25km Billiri-Gujba road, the 15km Sabonlayi-Ayaba road, the 15km Ladongor-Fubawure road, the 17km Kumo-Kalshingi road, the 10km Kutare- Mona road, the 10km Kundulum-Mallam Inna- Kurba road and the16km Marraraban-Jarkwami- Daniya roads as well as the Industrial Cluster road networks. These projects have since been completed and are being enjoyed by the people.

The Muhammadu Inuwa Yahaya administration also initiated and completed the 15.2km Jabba- Garin Wada, the 21km Degri-Talasse and 16km Malala–Dukkuyel regional roads with the same funding. These are aside the township road projects in Gombe metropolis.

The government has also succeeded in ensuring the total overhaul of our 114 Primary Healthcare Centres, PHCs, across 114 wards in the state just as the ongoing N1.8 billion General Hospitals in Bajoga, Kaltungo and Kuri is commendable. So also the Nigeria Erosion and Watershed Management Project/ World Bank, NEWMAP/WB, erosion control project for N2.9billion has already been completed and has greatly assisted in reducing the menace of erosion and flooding in the state capital especially in the Gombe State University to Mallam Inna area.

Thus the performance award bestowed on Governor Inuwa Yahaya by both the Leadership and Vanguard newspapers is most auspicious in proper evaluation of not only the merit behind the awards but also the implication for the greater good of Gombe State.