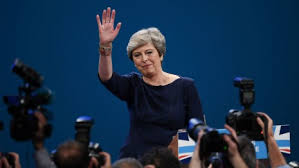 Theresa May has said the EU must “evolve” its stance on the Irish border as she seeks to persuade fellow leaders about the viability of her Brexit plan.

The PM is using a dinner in Salzburg to make the case for her controversial Chequers strategy for future relations.

Before the event, she said it was the only credible plan to allay concerns on the Irish border and trade disruption.

Austrian chancellor Sebastian Kurz, who is hosting the event, said both sides needed to make compromises.

The UK and EU both want to avoid a hard border – meaning any physical infrastructure like cameras or guard posts – between Northern Ireland and the Republic of Ireland but can’t agree on how.

Mrs May has previously rejected the EU’s “backstop” plan – which involves keeping Northern Ireland aligned with its trading rules – saying it would divide up the UK.

Ahead of the Salzburg summit, the EU’s negotiator Michel Barnier said most checks could take place away from border areas, an apparent concession to the UK.

Addressing reporters as she arrived for dinner in the Austrian city, Mrs May welcomed what she said was the EU’s recognition its initial proposal were “unacceptable”.

“If we’re going to achieve a successful conclusion then, just as the UK has evolved its position, the EU will need to evolve its position too,” she said.