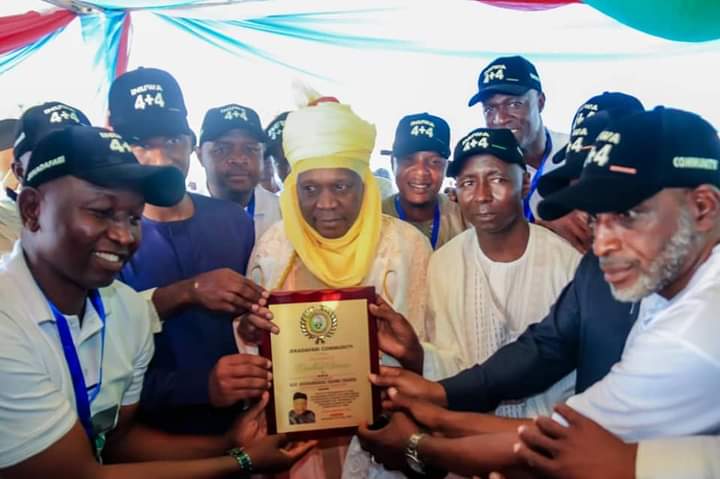 Gombe State Governor, Muhammadu Inuwa Yahaya has expressed gratitude to Jekadafari Community Forum for recognising his administration’s commitment to turn around the fortunes of the State.

Governor Inuwa Yahaya stated this at an event organized ,by the Jekadafari Community Forum to mark his administration’s second year in office and to honour him for superlative performance in the period under review.

The Governor equally thanked Jekadafari Community Forum for rekindling the bond of unity and togetherness amongst the people of the area through lending a helping hand especially to the less privileged ones, describing the efforts by the Forum to support 500 individuals as noble.

Governor Inuwa Yahaya used the occasion to call on sons and daughters of Jekadafari to continue to unite and forge a common front for the continuous growth and development of the Area.

He explained that the relationship that binds him and the people of Jekadafari transcends beyond the Governorship position which he occupies but is consummated on both paternal and maternal bond because he considers every home in the community as his own.

Governor Inuwa Yahaya also called on youths in the community and the State at large to engage themselves in meaningful ventures no matter how menial such craftsmanship may seem, describing the current economic challenges confronting the nation as one that is enough to bring out ingenuity of a person.

The Governor said his administration will continue to do everything necessary to provide condusive environment for doing business so that the State can continue to witness the influx of industries such as the soon to be established Madugu/ Sinoma Cement Factory in Kembu and Kwali.

Chairman of the occasion, Bashir Nuhu Aliko said Jekadafari Community Forum deemed it necessary to honour one of their illustrious sons in the person of Governor Muhammadu Inuwa Yahaya for not only making them proud but for bringing monumental social, economic and infrastructural development to the State in just two years.

He said to compliment the Governor’s giant stride, the Jekadafari Community Forum decided to pull resources with a view to assisting the less privileged in the community.

The District head of Doma, Alhaji Abdullahi Maikano said Governor Muhammadu Inuwa Yahaya has performed credibly well in the last two years in office and did not let his people down, saying its for this reason that the traditional Council of Doma District honoured him with the revered title of Santurankin Doma.

Earlier in his address of welcome the chairman of Jekadafari Community Forum Dr. Lawal Bala said the event was put together to celebrate the administrative acumen of Governor Muhammadu Inuwa Yahaya who has done so much with so little, referencing the economic meltdown occasioned by the covid-19 Pandemic.

Highlights of the occasion were the turbaning of Governor Muhammadu Inuwa Yahaya as the Santurankin Doma and presentation of award of excellence to the Governor in recognition of his Meritorious Service to the People of Gombe State.