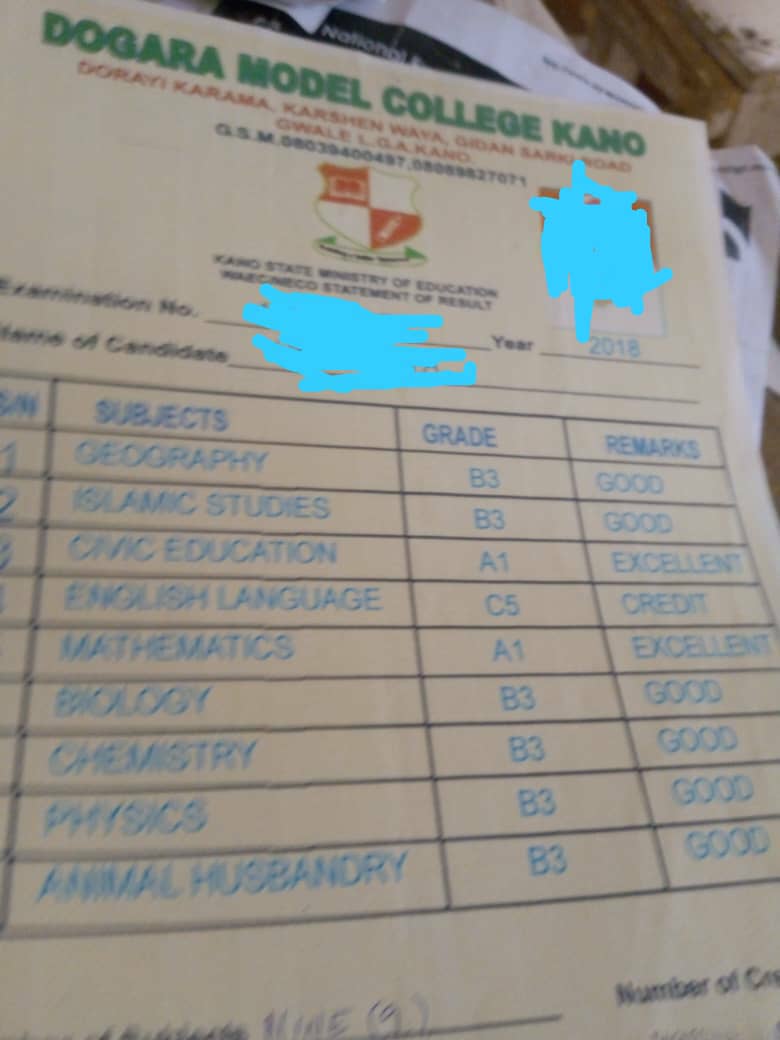 “I don’t know the exact location of the school where I passed all my West Africa Examination Council (WAEC) papers, my husband only collected my passport photograph and returned with fantastic results months later” – A housewife simply identified as Aisha confessed to Solacebase.

Regardless of the source of her O’ level result, Aisha is now a graduate of School of Health Technology in Kano, just as every other thousand who indulged in a similar act in Nigeria.

Her case was not different from that of a 22-year-old Aminu, who after failing his previous examinations for two consecutive years, registered for NECO May/June exams at a Government School in Gwale Local Government Area of Kano and passed all subjects in absentia as a ‘proxy candidate’.

Advert
“After paying N45, 000 and did the necessary registration, I didn’t go to the school again. Somebody wrote the exams on my behalf and I didn’t even know him. I just bought a scratch card at Sabowar Kofa and checked my result when it came out and I passed all my papers” – Aminu hinted our correspondent.

In Mohammed Abba’s case, he registered for WAEC at a private school, Dogara Model College Kano in Dorayi area, despite being an external student that supposed to sit for November/December Private Exams, he was accommodated and fully participated in the exams.

“During the exams, they solve everything for us, they will solve the Objective (OBJ) questions and distribute them to all of us, they will also write answers of all essay questions on the chalkboard. When the external supervisors are around, they always compromise them to enable us to do whatever we like at the exam halls” Abba narrated in the Hausa language.

Pay N45, 000 Only As Proxy Candidate and Come Back For Your Results Months Later – Exams Officer

“Oga you don’t need to participate in the exams, just submit your passport, pay us N45, 000, we will call you when the result is out and be rest assured that you will pass all the papers, we call someone like you a ‘proxy candidate’, see the result of one of the proxy candidates here, she only got one ‘C’ (Credit) others are ‘A1s’, ‘B2’ and ‘B3’ – An Examination Officer at Dogara Model College, Aminu Ibrahim explained to our undercover reporter.

These scenarios portray the worrisome situation of examination malpractices in Nigeria, vis a vis the mass exodus of Private Candidates to the so-called ‘miracle centers’ being seen as a safe haven to facilitate their ulterior motive of indulging in all forms of examination malpractices ranging from impersonation, multiple handwriting on a particular script, similar handwriting on separate scripts, and a particular script having about four different handwriting, as well as a particular candidate having two separate scripts among others.

Also confirming the ugly trend, WAEC Branch Controller in charge of Kano and Jigawa, Ayobami Lateef Suberu told Solacebase that the number of prospective candidates registering for NOV/DEC private exams has drastically reduced.
He lamented that due to the limited number of manpower for thorough supervision, the private candidates were leveraging on the challenge, hence trooping to May/June exams.
“They have realized that we have limited number of staff to thoroughly supervise the overwhelming number of May/June Examination candidates, that was what led to the influx of private candidates to the schools uniform exams”
“Before we used to have over 400, 000 candidates registering for NOV/DEV exams, but now we hardly get 100, 000. Take Kano for instance, we have over 500 schools writing May/June exams, but for the Nov/Dec, the exams will be written at only eight centers across the Kano State this year, you can now realize how easy it is to monitor those centers, but it is not humanly possible to achieve that during MAY/JUNE exams”

The WAEC boss, however, noted that the examination body had initiated a policy compelling schools to be updating data of their students from SS1 to SS3 on WAEC’s portal to enable the latter to track the students’ academic records till SS3 class.

According to the development, Suberu said henceforth only those who would be consistently monitored on the portal are the eligible candidates. He promised that full implementation of the initiative would begin by 2020.

We Get Just N300 for Reporting Fraudulent Extermination Centers – Examiner

After scaling the registration and writing stages, the next point where the examination malpractices could be detected is in the course of marking the scripts by the examiners, but this phase is also battling with its peculiar challenge.

One of the examiners who spoke with Solacebase, Abe Opeyemi, said considering the difficulties and rigorous process that the examiners are being subjected to in the course of observing the laid down conditions of proving beyond a reasonable doubt, any identified center for examination malpractices, most of the examiners hardly report such.

According to him, “We get just twelve naira on each WAEC paper we mark, an average of N14, 000 in rigorous marking for two consecutive weeks, we usually identify fraudulent activities being perpetrated at these so-called ‘miracle centers’ in the course of our marking, but we mostly overlook them, because if we report them to authorities, it will subject us to painstaking conditions of proving the massive exams malpractices beyond reasonable doubt, and if we achieve this, WAEC only pays us N300 on each center canceled eventually, can you now imagine that the money does not commensurate with the stress we would incur in the process”

An Examination Officers simply identified as Malam Sabo, at one of the visited government schools told our undercover reporter the looming difficulties for registering an illegal candidate for WAEC from next year due to its new policy of capturing data of prospective candidate from SS1, hence advising our reporter who indicated interest for May/June WAEC to opt for NECO.

His words “there is one thing with WAEC, this time around WAEC came up with one policy, they came up with registering Continuous Assessment for students from SS2 class since May/June exams is largely for students, they keep on checking the assessment up to SS3, so those are the only candidates that will write the may/June exams in 2020, but we have no problem with NECO, so I will advise you to pay for NECO”

“Besides that, you are too big, it is almost your children that are writing the exams, so just pay the money, somebody will sit for you and I assure you that you will pass the exams.

From Sabo’s revelation, the perpetrators of examination malpractices seem to be more comfortable with the shortcomings of NECO’s registration process, apparently aiding the fraudulent act.

But when contacted, NECO’s North West Coordinator, Abdullahi Rani Williams said the only adopted policy to deal with such situation was to ensure that only candidates whose photograph appear on the captured bio-data are the only eligible candidates.

“We only rely on our records to ensure that those who registered are the eligible candidates, though we have been banning those schools were being tagged as miracle centers and we will continue to do that, for this menace to end in our society, the federal ministry of education has a major role to play”
On her part, the permanent secretary of the Kano State Ministry of Education, Laureta Ado Diso accused the prospective candidates of imposing themselves on some fraudulent teachers to perpetrate the act, therefore, urging the public to report any identified miracle center as the ministry will not hesitate to take necessary action.