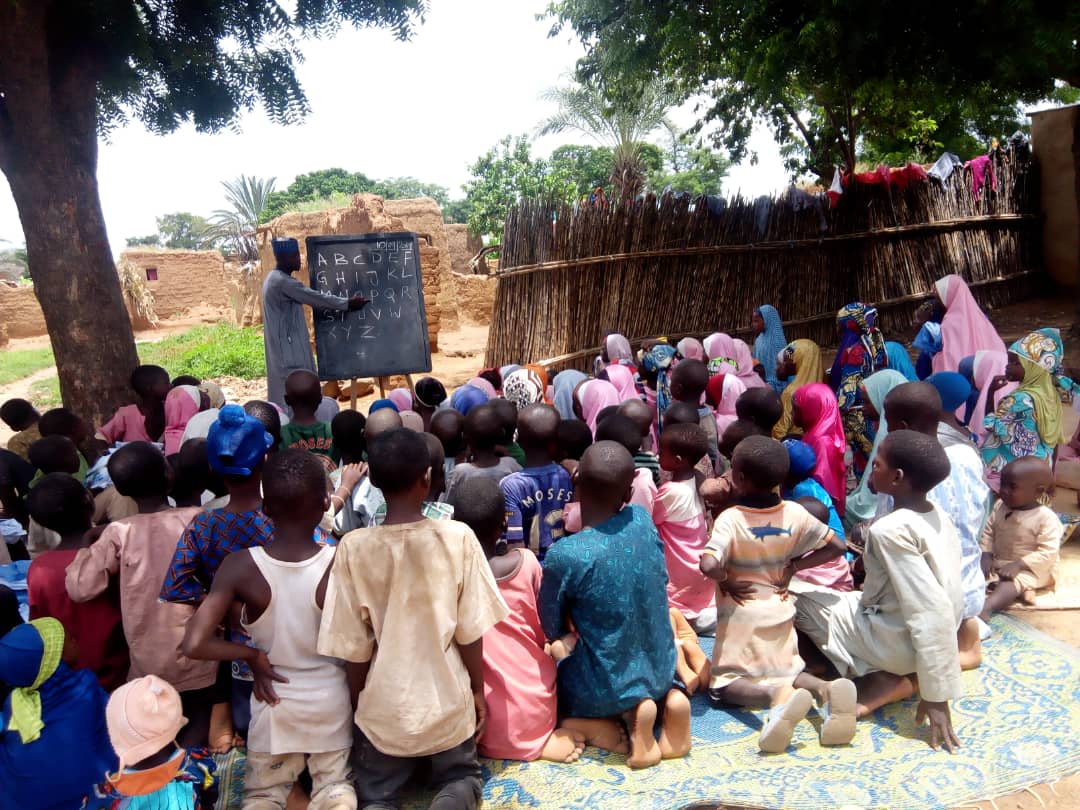 Apart from its usual health benefits being a medicinal plant proficient in healing a number of illnesses, Neem tree popularly known as Dongo Yaro tree is gradually becoming the only reliable shelter in many public Schools hit by windstorms for several years in Kano State as most of the Schools are suffering total neglect from the constituted authorities.

The situation is a clear indication of the level of infrastructural decadence in Kano. Apart from the infrastructural deficit in the State Public Schools amounting to over 30, 000 classrooms according to a recent survey by the State Government, the existing structures mostly in rural area are in a comatose condition.

Yaura Zango Primary School in Albasu Local Government Area of Kano State shares from this ugly trend. After two years that the School built in 1976 had its roofs blown off by windstorms, the teachers resulted to converting four of the planted Neem trees at the School to classrooms by classifying them accordingly from Primary One to Four.

However, the remaining Primary Five and Six were merged inside vestige of the obviously dilapidated classroom which also suffered the windstorms in 2017.

The Headmaster of the School, Yusuf Abdullahi told our correspondent that he had written several letters to the Local Education Authority LEA and the Albasu Local Government Secretariat for onward action but to no avail.

“As you can see, this tree that we write primary one on it is accommodating Pupils of Nursery and Primary One Class, see the trees for Primary Two, Three and Four being used as Classrooms for our respective pupils in that regard, this is how we have been managing it since 2017 after the windstorms blew off the two buildings here, we have written several letters to LEA and LGA, yet no action. Whenever the weather is cloudy, we used to send the pupils home and if the weather eventually cleared without rain, we have missed that particular day already” He explained.

During our visit, the Headmaster was the only teacher present at the School, covering the entire six classes without satisfying any of them. He claimed that one out of the remaining five teachers on duty took an excuse while he could not account for whereabout of the remaining four teachers.

The incident of windstorms damaging public schools is no longer news in Kano especially at the remote areas. While many of such incidents were left unattended to in some areas including Sumaila, Danfodio Islamiyya Primary School in Albasu, and Ganda in Dambatta visited by our correspondent, among others, a few of them got succour though the interventions of some development partners and donor agencies such as Global Partnership for Education GPE and the Department For International Development DFID, according to our findings.

A parent in Gezawa, Musa Abdullahi narrated to our correspondent how they rallied round to savage the problem of infrastructure decadence of Lautai Primary School after several futile attempts to get the attention of the State Government.

“Most of the repairs are being done by the Global Partnership for Education GPE project and some other NGOs, government hardly come to our rescue, after our several appeals, we as a community decided to mobilize ourselves and repaired this building you are seeing, we have a number of them in other places that have been abandoned” – he lamented.

The challenges of infrastructural decadence is even a bit friendly when compared to non existence of public school in some communities where pupils have to cover at least ten kilometers before accessing the nearest Public Schools. For instance, Shara Community in Sumaila Local Government Area of Kano has been existing for over a century without producing a primary School graduate due to distance of the nearest schools to the community.

Mallam Rabilu Musa, a parent at Shara community lamented how his children and that of his neighbours are usually stay at home throughout rainy season due to the huddle and risk of crossing a river in the course of trekking about seven kilometers to the nearest Matigwai community where a primary school is situated.

A reliable source at the State Government House who was privy to a recent report conducted by the need assessment committee in each of the 44 Local Government Areas of Kano, hinted our Correspondent that the State needs additional 30,000 classrooms to get every child enroll in School, describing the situation as a huge burden for the State Government.

His words “we have over 6,000 Primary Schools, the State needs about additional 30, 000 Schools, you can imagine if common one million naira is budgeted for a classroom, it means about 30 billion naira is needed for the project, let alone payment of compensations for land owners, recruitment of teachers, their allowances, emoluments, which naturally is higher than the cost of executing the project because they are recurrent expenditures”.

The education sector shares the largest vote of Kano annual budget. The budget of the sector in relation to the total budget of the State was 23.15% in 2015, 19.92% in 2016, 23.13% in 2017 and 23.73% in 2018, but these did not commensurate with the level of capital projects executed within the periods according to the Sector Performance Report and Financial Statements Reports from the Office of the State Accountant General.

In the period under review, the actual expenditure as shown by the variances, funds provided for the execution of the projects and programmes of the sector fell short of the budgetary allocations.”
According to the report, in 2015, the performance of the capital expenditure when compared with the budget was 39.37% in 2015, it drastically dropped to 17.78% in 2016, it rose to 25.36% in 2017 and significantly improved to 47.88% in 2018, while the recurrent expenditures maintained an average of over 90% within the years. Despite the improvement, most of the identified challenges linger hitherto.

Several attempts to speak with the Chairman of SUBEB in Kano, Dr Danlami Hayyo over the development were not successful due to official schedules.

On his part, the newly appointed Commissioner for Education in the State, Muhammed Sanusi Kiru, admitted that the huge amount budgeted for the sector in the last four years did not commensurate with the reality of dilapidated structures in Kano Public Schools.

He attributed the situation to lack of consistency in the leadership of the ministry since 2015.
“let me be honest with you, from 2015 to 2019, the story is not impressive because it was the Deputy Governor who was also acting as the Commissioner of Education, he wasn’t even staying here, he was operating from the Deputy Governor’s Office, he may not even know the nitty gritty of operations here and even the staff may not be too proactive because they were not staying with the Commissioner and after that, an acting Commissioner was appointed to oversee the ministry, he also operated from the ministry of works, then another commissioner was appointed again who spent only six months, so you can see, in the last four years, there was no stability here in the leadership” He noted.
Kiru however promised to merge his words with action towards ensuring that every kobo spends on projects of the sector is accounted for. He also vowed to push for more release of the capital expenditures for the ministry so as to complement the State Government’s recent declaration of free and compulsory education across the State.