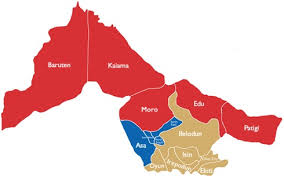 The Kwara Visioners,  a group working to bring Progressives both home and in diaspora together to support delivery of good governance has called for quality leadership across levels in order to accelerate development of the state.

The Convener of Kwara Visioners Network for Rural Development, Mr Tunde Babalola made this call on Saturday while addressing newsmen at Inaugural Lecture of the advocacy group held at University of Ilorin Auditorium.

He stated that Kwara Visioners is creating platform for brilliant minds to be able to express their political aspirations, through a robust strategic ideas for the state development.

“We are selling an idea, we want people decision to count in choosing their leaders. We are recruiting quality people into leadership positions. We are working to ensure the best hands take up leadership. We will sensitize the people, build capacity and intensify advocacy for political participation. The people should understand leadership is not about the Governor only but starts from councillor, chairman, Assembly members and others.” Kwara Visioners explained.

Babalola however dismissed the notion that the group is planning to block Governor AbdulRahman Abdulrazaq’s reelection, saying ‘it’s left for the people to decide’.

He added that the group produced New Kwara State Development Framework to guide future leaders on how to develop the state.

While speaking on Kwara APC Crisis, the Controller of Public Affairs/News at TVC News, Mr Babajide Otitoju urged Governor AbdulRahman AbdulRazaq to work with all political tendencies within the ruling party, noting that ‘they must not go poll as a divided house’.

Otitoju said the unity among opposition camps in Kwara State led to defeat of Saraki dynasty during 2019 general elections.

“Nobody can win election alone in Nigeria. You need to activate your political structure to win election, especially on election day. Only Governor AbdulRahman AbdulRazaq can resolve crisis in Kwara APC. We dedicated one episode of Journalists Hangout to discuss the crisis and I will repeat my recommendations. The Governor need to work with all the tendencies. They need to resolve this crisis before the next election.”

Former Chairman of the Independent National Electoral Commission, Prof Attahiru Jega who was the Guest Speaker and speakers; Dr Tope Fasua and Mr Olanrewaju recommended new thinking and reorientation among Nigerians for the country to attain greatness.