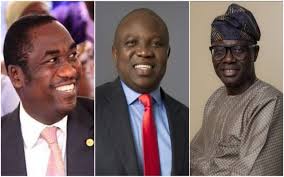 Emerging from ongoing secret meeting of members of Lagos State House of Assembly, was report of the state’s lawmakers who have just adopted Babajide Sanwo-olu as preferred candidate to have All Progressive Congress (APC) chapter of Lagos’s governorship ticket against embattled incumbent Governor, Akinwunmi Ambode.

Also, one of the governorship contenders, former Commissioner of Works, Femi Hamzat, had also back down on his ambition and adopted Sawo-olu as his preferred candidate to have the party’s ticket.

From the ongoing meeting, the 36 members of the house preferred Sanwo-olu as their candidate and they were ready to all come out open on their decision before meeting of stakeholders at the party’s secretariat later today.

A credible source told our correspondent that the members had reached consensus on the matter and that the decision would soon be made available in public domain once the 36 lawmakers of the house complete signing of the agreement.