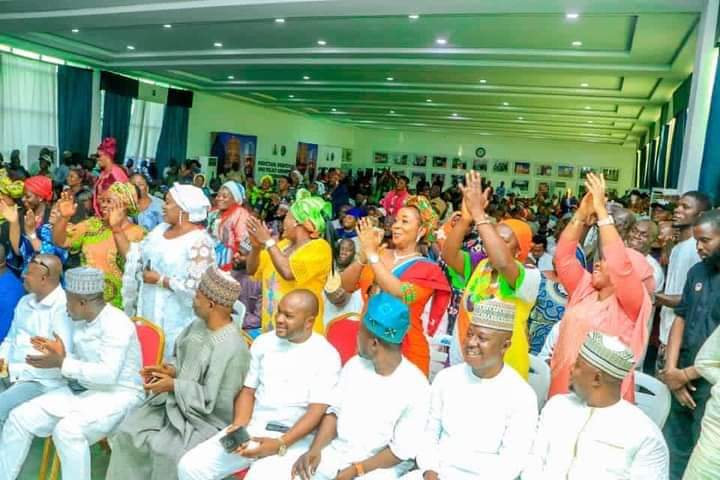 Kogi State Chapter of the All Progressives Congress (APC) has nominated women as Vice Chairmanship candidates in the forthcoming local government elections.

Governor Yahaya Bello disclosed this during APC Stakeholders meeting held at Government House on Friday ahead of the December 12 Local Government Election in Kogi State.

The APC Chairmanship, Vice Chairmanship and Councillorship candidates across the 21 Local Government Areas were introduced to party leadership and stakeholders.

Gov. Bello while addressing the stakeholders expressed that he was confident that the party would record 100 percent victory in its outing.

He noted that the APC in Kogi State was a united family and as such would not give room for any sought of rebellion from any of its party members which sought to cause division.

The Governor said his administration had the antecedents of victory for the ruling party since his assumption of office, noting that forth coming polls would not be different.

The Governor said his government was prepared to make a statement through the LG poll, hence the decision of the APC to make all Vice Chairmen women, noting that the party has shown over time to be fair, just and inclusive.

He noted that aside from the already nominated 21 Local Government vice chairman and respective councilors, it was the desire of the party for women to emerge as council leaders by exploring the necessary constitutional means.

Governor Bello promised to also ensure that no stakeholder would be played out of relevance but made it clear that his government would not allow a situation where some major political heavyweights would take advantage of office holders and office seekers by making them to unjustly part with their resources.

While warning those that would be given important office responsibilities in various Local Government Areas against any form of lawlessness or acts capable of causing disaffection amongst supporters and other office holders, he noted that where such is found, those responsible would be made to face the wrath of the law in accordance with the regulations guiding APC.

He thanked the Chairman of the APC in the state and other party officials in all wards and LGAs, saying that without them, the party’s victory would not have been possible, and reserved special recognition and praise for APC faithful across the state for their continued support and loyalty, assuring them that he would not let them down.

In his goodwill message, Deputy Governor of Kogi State, Chief Edward Onoja thanked the Governor for his political leadership which he identified as the secret to the party’s thrive in the state.

He thanked the Governor for being an advocate for women inclusiveness while he also thanked the people for their continued support of the Gov. Bello led administration.