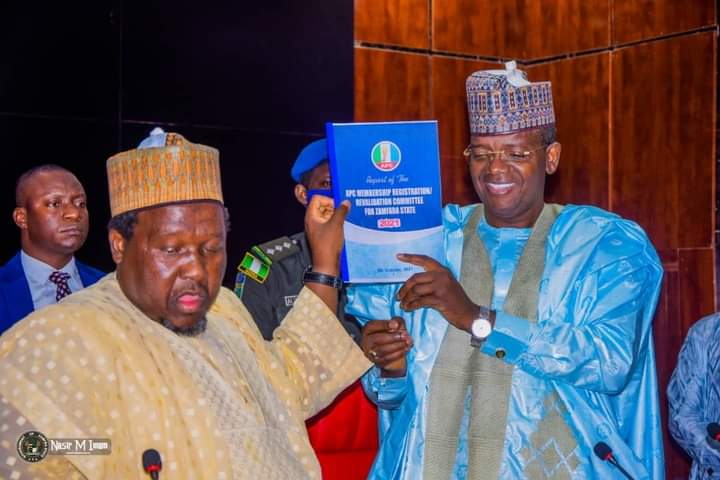 The team which was sent to the state for the onerous assignment from the APC National Secretarial, Abuja, is headed by Alhaji Ibrahim Kabir Masari.

While handing over the report to the governor at the Government House, Gusau, Masari expressed happiness in the large turnout of members of the party for the registration, describing it as ‘unprecedented and overwhelming.’

He informed the governor that the exercise, though challenging, was hitch-free, smooth and without any security breach.

He said, a total of 1,020,800 members were registered and posted on the public domain through google.

The team leader also reaffirmed Governor Matawalle as the party’s recognized leader in the state pointing out that it is only those who are bent on bringing down the party that will not recognize the leader as provided in the party’s constitution and urged members to continue to rally round Matawalle for the unity and progress of the party.

He extended the party’s National Headquarter’s appreciation to the governor for ensuring peace among members of the party in the state.

Receiving the document, the governor who commended the committee for a job welldone, said under his stewardship, the APC in Zamfara is now more united and peaceful.

The Shattiman Sakkwato who urged members of the party to continue to come together for the growth and development of the party and the state, also commended the APC National leadership and its National Secretariat for organizing the exercise, especially for uploading the list on Google to afford every member see that he or she has not been missed out.

He also commended people of the state for showing love and support to the APC and his administration which he noted is facilitating the delivery of government’s policies and programmes.

Matawalle assured the National Headquarters of the party that very soon, he will continue to receive more defectors from other political parties into the APC in the state.