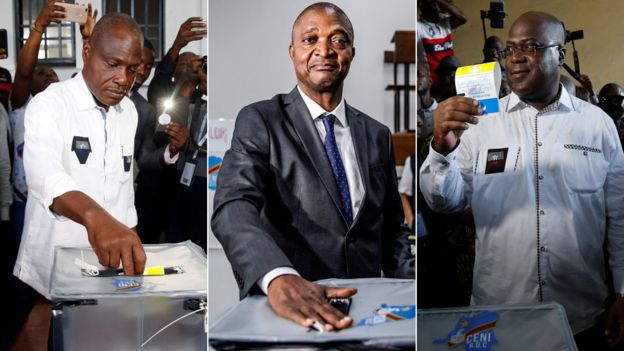 There are 21 candidates, but three frontrunners:

Emmanuel Ramazani Shadary, a former interior minister and Kabila loyalist, who was hit by European Union sanctions for his role in the violent suppression of opposition protests in 2017

Martin Fayulu, a former oil executive who has promised “a dignified and prosperous Congo”, but who poor Congolese feel may not advance their cause

Felix Tshisekedi Tshilombo, the son of a late veteran opposition leader who has promised to make the fight against poverty his priority

Voting is still ongoing in some polling units but a police officer and civilian were killed in Eastern Democratic Republic of Congo in a dispute over alleged voting fraud in Sunday’s presidential and legislative elections, a witness and a politician from the area said.

Vital Kamerhe, a politician from South Kivu province, and a witness, who wished to remain anonymous, said an altercation broke out at a polling place in the town of Walungu after voters accused an election official of fraud.

A police officer shot and killed a young man involved in the melee and the crowd then beat the officer to death, they said.