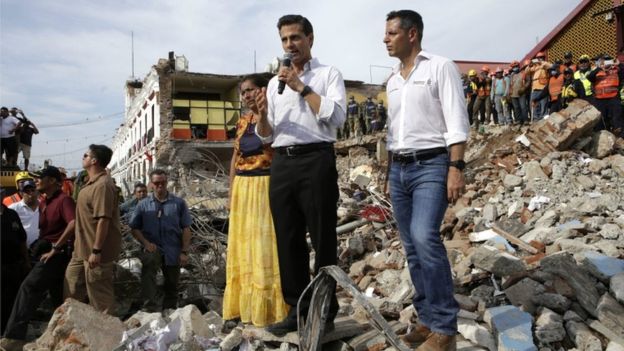 The number of people killed by a powerful earthquake off the southern coast of Mexico has risen to at least 61, officials say.

A huge rescue operation is under way in the worst-hit states of Tabasco, Oaxaca and Chiapas where people are feared trapped under rubble.

The 8.1-magnitude quake, which hit late on Thursday, was the strongest to hit the region in a century.

President Peña Nieto has declared a day of mourning, saying flags would fly at half mast out of respect for the dead and bereaved.

The president said 45 deaths had been reported in Oaxaca, 12 in Chiapas and four in Tabasco.

One of the worst hit towns was Juchitán, in Oaxaca, where at least 17 deaths have been reported. The town hall and a number of other buildings were destroyed or badly damaged.

“The situation is Juchitán is critical; this is the most terrible moment in its history,” said Mayor Gloria Sanchez.

The BBC’s Arturo Wallace says the affected region is the poorest and least developed part of Mexico and the full extent of the damage is yet to become clear.

At least one other person was killed in Guatemala, its president has said.

The huge quake struck at 23:50 local time on Thursday (04:50 GMT Friday), shaking buildings and causing panic hundreds of miles away in the capital, Mexico City.