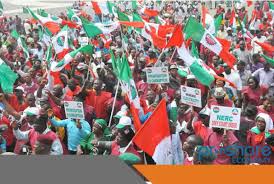 The Nigerian Labour Congress (NLC) has stated that the consequential adjustment for workers on level 7-17 proposed by Kwara State Government is not acceptable.

The Kwara NLC Chairman, Alhaji Issa Ore disclosed this in an interview with Punch Newspaper Correspondent on Sunday.

Ore noted that the signing of minimum wage agreement to workers on grade level 1-6 was to commit the state government and give the arrangement legal backing.

“The state government has been paying the minimum wage to workers on grade level 1-6. We had to sign the minimum wage agreement with them to make them committed because if they don’t sign the agreement, they may withdraw the payment anytime.” He explained.

The Labour leader however stated the consequential adjustment table by government team is not in the interest of the state workers.

His words: “But, we are yet to agree on consequential adjustment for workers on level 7-17 because we did not agree with the table presented to the labour by the government team.

“The table presented to the labour team by the government was not acceptable and could not be in the interest of the state workers.”

The state minimum wage team comprised of labour team and the government team headed by the Head of the State Public Service and some permanent secretaries.