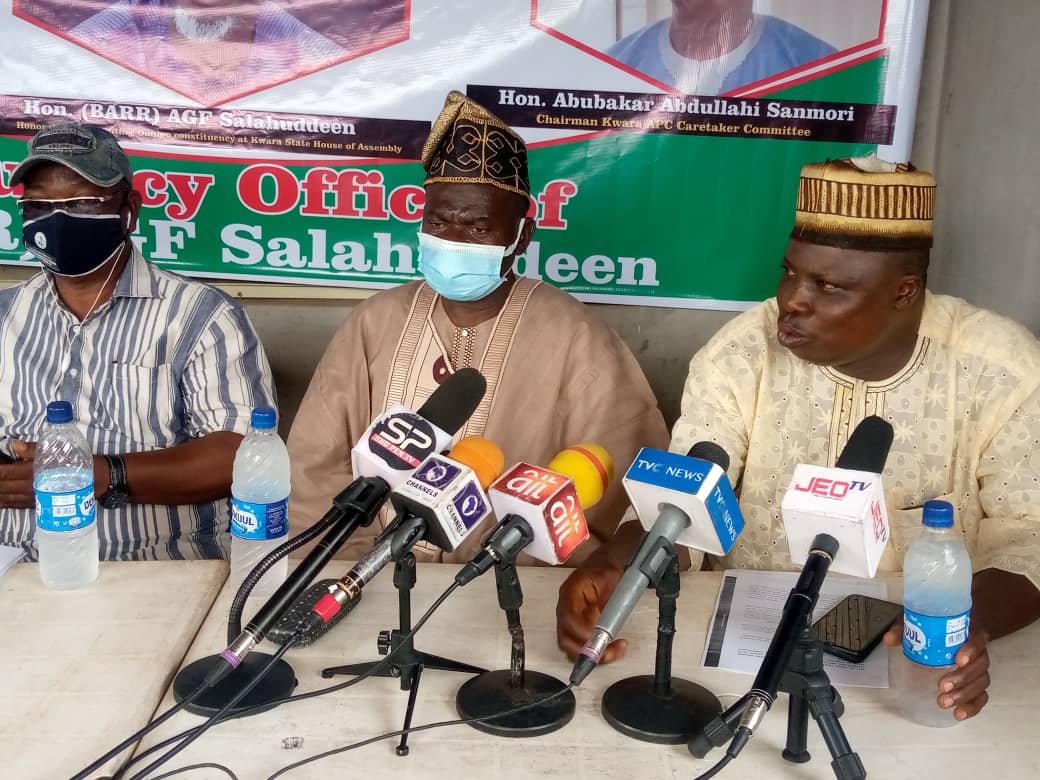 The member representing Omupo State Constituency in Kwara State House of Assembly, Hon Abdulganiyu Folani (AGF) Salahudeen has unveiled location of his projects across eight wards of the constituency.

AGF Salahudeen while addressing newsmen at Omupo State Constituency in Omupo on Thursday described people calling for his recall from Kwara Assembly as disgruntled individuals.

The lawmaker said he has implemented impactful projects in every ward within the constituency.

Salahudeen said: ”It was alleged that I am the one hoarding the membership registration documents. This is laughable because I am an honourable member of the State House of Assembly representing the good people of Omupo Constituency. I am neither a member of the party’s Caretaker Committee in the state nor local government. Why would I be the one holding party registration documents? I will ask them where they keep their sense of reasoning.”

”I’ve tried as much as possible to refrain from joining issue with the ranting of some disgruntled individuals in our constituency for a while now because I don’t want to join issues with them. However, I decided to address this press conference in order to put some facts straight for the sake of posterity. If I keep quiet, their lies will be seen as truth. For this reason, I decided to attend to some fundamental issues raised by these disgruntled elements.” He explained

Meanwhile, APC leadership and constituency present at the event have endorsed AGF Salahudeen for second term.

They described the lawmaker as a good ambassador, resourceful and kindhearted representative.

AGF Salahudeen Achievements
The question here is what is the duties of an elected honourable member in the Assembly? The primary duty of the Member of Parliament all over the world is to legislate and make laws. Incidentally, I am a legal practitioner of repute with over 20years at bar experience, I have won many cases to my credit and have served in various capacity to the admiration of the bar and bench. So one cannot say I do not understand the content of the constitution and the process of law making. The Speaker of the 9th Assembly and the Clerk of the House can testify to the fact that I am an integral part of the House and indeed the Chairman House committee on Judiciary, Ethics and Privilege. I am equally a member of House committee on Agric and other House committees. I was the chairman Ad- hoc committee that investigated the Local Government Fund. The records are there in the House for verification on my contributions on every issues on the floor of the House.

Some of my achievements since assumption of office on June 12, 2019 are enumerated below:

IGBAJA WARD 3
Contribution to Annual Ebamiyo Programmes in December, 2019 and 2020

IGBAJA WARD 1
Contribution to Igbaja community through Ifowosowopo in December 2019.
– Huge contribution to construction of residential residence of Muhammed Awobimpe (aka Shiloh) the suspended APC Chairman Ifelodun Local Government located in Igbaja.
– Regular and Monthly contributions to the party activities through the suspended chairman(Shiloh)

Project Facilitated through the State Government.
– Complete rehabilitation of water works in Igbaja
– Renovation of 1 block of 4 classroom at Igbaja Baptist Grammar School.
-Agricultural Development Project at Adanla (Clearing of 300 Hectares of land)- Federal Government.
Facilitation of appointment of Sons and Daughters from the constituency into political offices:
– Chairman, House of Assembly Service Commission
– PM 3, Local Govt. Service Commission
– S. A. Health
– S. A. Religion
– Commissioner
– A Permanent Secretary from our constituency

35 Billion Naira Bond.
It is worthy to note that I was massively elected by the good people of Omupo state constituency in the 2019 general elections to represent them in the state Assembly. It is the confidence reposed in me by the people of my constituency that always propel me to do my work assiduously at the floor of the house. To this end, I participated actively during the debate of the #35 Billon bond having consulted the stakeholders in the constituency including the traditional rulers considering the benefit the bond will attract to my constituency, local government and Kwara South at large.

The #35 Billion Bond of His Excellency is aimed at fast tracking the rapid development of the state which does not exclude our constituency.

In addition, I have invested so much in this year’s budget to the extent that a lot of projects have been included in the budget. By the time the state government is rolling out the implementation of the budget, our constituency will not be left out.
The constituency is equally included in various governmental activities such as RAMP, School feeding, Health Insurance Scheme, Owo Arugbo, Owo Isowo etc

Conclusively, my activities since assumption of office in 2019 is unprecedented to the people of my constituency. It is only a selfish individuals that will denied this fact but what am sure of is that posterity will judge all of us.
I will however advise these individuals to put their malicious act aside and lets join hands to make our constituency which had been grossly short changed in the past move forward.