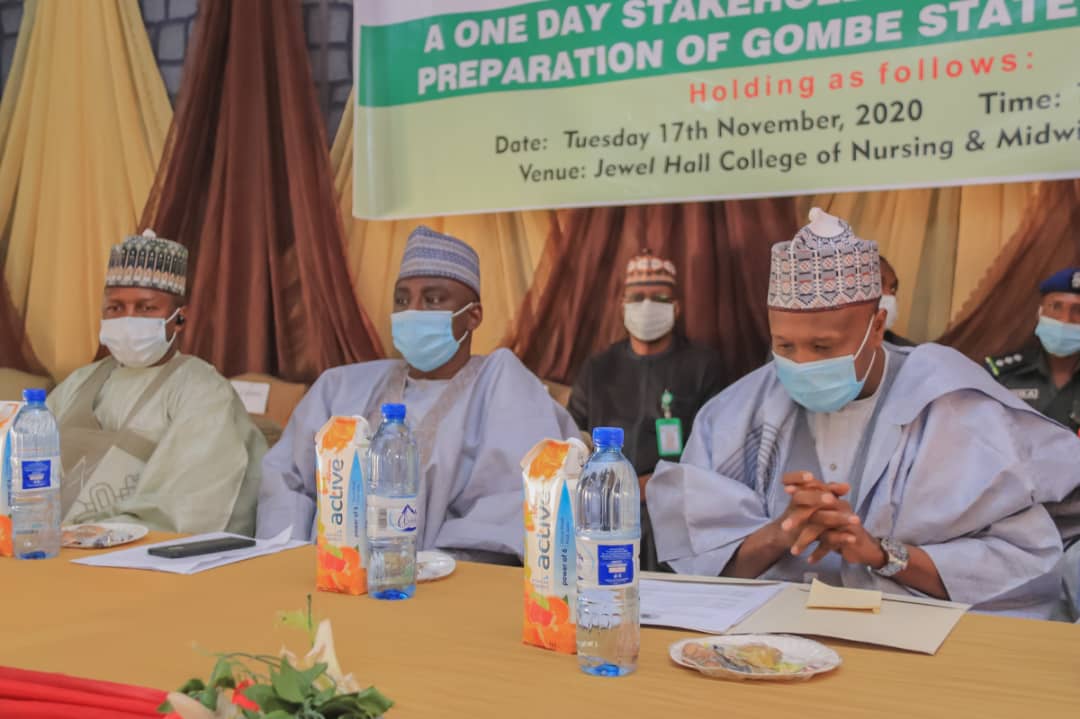 …Says His Administration will Continue to Ensure All-inclusive Budgeting, Government

As part of preparations for the 2021 budget, Gombe state Government has held a stakeholders’ meeting with traditional rulers, community leaders, trade unions, faith-based and non- governmental organisations in order to ensure an all-inclusive budgeting process.

Governor Muhammadu Inuwa Yahaya while declaring the public engagement open, which has now become an annual ritual in the present administration, said citizens will continue to remain the centre piece of his administration.

The one-day stakeholders meeting was jointly organised by the Gombe State Ministry of Finance and the office of the Special Adviser on Budget, Planning and Development Partners Coordination.

Governor Yahaya said the decision to organise the second edition of the stakeholders meeting on budget preparation followed the successes recorded in the 2020 budget, stressing that the appropriations Act which placed emphasis on change has significantly transformed the State more than what his administration inherited.

“Last year around this time we had this engagement but prior to that interface, there was never such an engagement in Gombe State and that, we did in order to have face- to -face discussions with the local people such as district and village heads, trade unions, artisans and members of civil society to share ideas and make inputs into the budgetary process”.

He said budgetary processes are a basic guide on which a society is governed and provides the means by which the performance of Government is gauged, saying his administration will leverage on the input of stakeholders at the meeting to provide basic needs of the people and place the state above its counterparts.

The Governor explained that last year’s budget was originally put at 131 billion Naira but that due to the covid-19 Pandemic it was reviewed to N107 billion, adding that inspite of global economic crunch, the budget performance of the State stands at 62.5 percent, expressing the hope that in a month’s time, the performance index would have greatly increased as more people- oriented projects are ongoing while others are being initiated.

Governor Inuwa Yahaya revealed that this year’s budget will hover around one hundred and sixteen to one hundred and twenty billion and is expected to target on the five pillars of his administration which includes Education, Health Agriculture, Infrastructure development and Security.

He said considering the importance of development planning to the growth and development of any society, his administration is working to produce the 10-year Development plan( 2020-2030) that will guide the State in her march to greatness.

“If we are able to work hard and achieve the content of our development plan, I believe at the end of the day not only us but our children and grandchildren will eventually enjoy the hard work we are all doing today”.

The Governor expressed his appreciation to UNDP, the SDGs office, the Federal Ministry of Finance Budget and National Planning, and the academia for providing guidance to the government towards developing the 2020-2030 plan for the State.

He said inspite of the covid-19 Pandemic, the State remains stable, adding that his administration will continue to maintain focus towards the goal of repositioning the State for better service delivery to all irrespective of political inclination.

The Governor said his administration will continue to find innovative ways to manage finances in view of the paucity of funds the State grapples with and the depletion of national revenue generated from oil.

He said the time has come for the State to look inward on ways to finance the budget as over reliance on the federation account for the State allocation is no longer tenable.

In view of this, the speaker said, the House under his leadership will give speedy passage to the budget when transmitted to the legislature.

The Gombe State Commissioner of finance and economic development, Muhammad Gambo Magaji assured citizens of the State that just like the 2020 budget proposal, the present administration of Governor Muhammadu Inuwa Yahaya will give heed contain in the 2021 budget.

In his address of welcome, the Special Adviser on Budget Planning and Development Partners Coordination, Dr. Ishaku Mohammed had earlier in an address of welcome said the stakeholders’ meeting on budget preparation was a clear demonstration of the Governor’s disposition to transparency and accountability in governance.