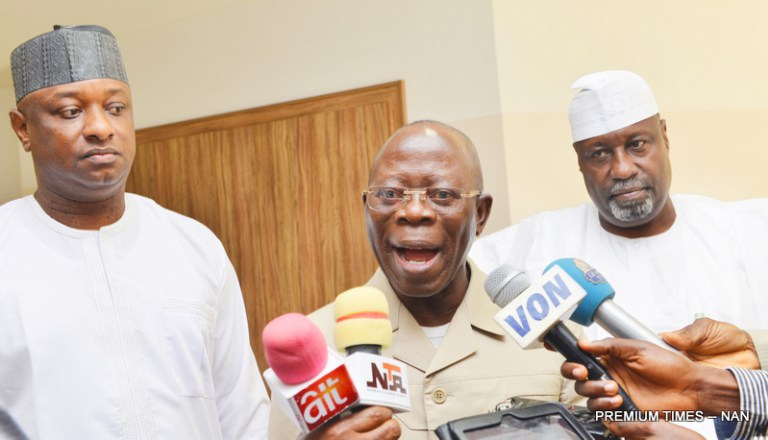 The Appeal Court sitting in Abuja, the Federal Capital on Monday dismissed an application by the former National Chairman of the Party, Comrade Adams Oshiomhole against Imo State APC leadership.

Oshiomhola’s application for a leave to appeal an earlier judgement of the High Court of the Federal Capital Territory, Abuja, barring the Party or any of its organs from interfering with the the legitimate tenure of the State Executive Council in Imo State.

The FCT High Court presided over by Justice Othman Musa had on the 18th of August, 2018 entered a judgement in favour of the Dan Nwafor led State Executive Committee of the Party, in a suit brought by a son of Nigeria’s former Senate President, Evan Enwerem (Jnr).

The Court among other things, restrained the All Progressives Congress, its then National Chairman and all other organs of the Party from interfering or tampering with the tenure, duties and powers of the Dan Nwafor led State Executive Committee.

Having severally disobeyed this judicial directive and at the risk of committal to prison for contempt of Court, the former National Chairman of the Party, applied to the Court of Appeals for a leave to appeal against the judgement, having failed to appeal the judgement within the window allowed for such Appeal. However, Justice Ige of the Nigerian Court of Appeal upheld the argument of Counsel to Dan Nwafor opposing the application.

The judgement therefore reaffirms Daniel Nwafor as the authentic State Chairman of the Party in the State and therefore invalidates any other individual or group of individuals purporting to act as Chairman or officers of the Party at any level.

Meanwhile, IMO APC State Spokesman, Onwuasoanya FCC Jones in swift reaction urged all members of the Party, no matter, on which side of the divide they may find themselves, to come together, so that; “a bunch of broom, we shall work unitedly for the progress of the Party.”