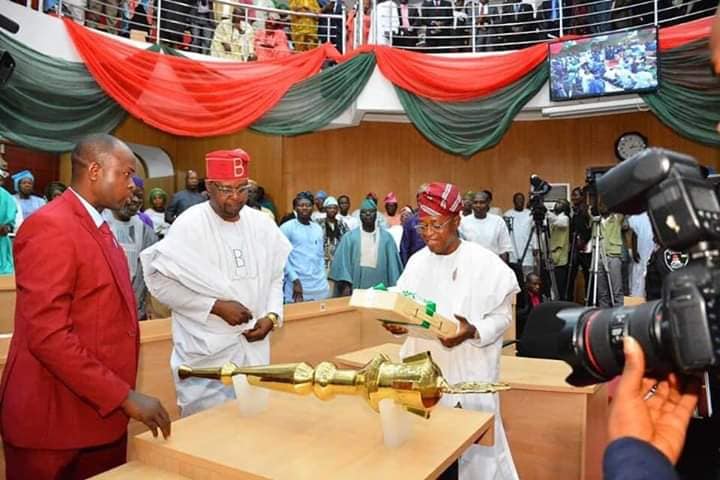 Oyewale Oyelola
Osun State Government has berated  Peoples Democratic Party (PDP) for their irrational criticism of 2019 budget proposal  presented by Governor Gboyega Oyetola to the House of Assembly on Thursday.
The state government in a statement issued on Sunday by Supervisor-in-charge of Ministry of Information and Strategy, Adelani Baderinwa  says Osun PDP criticism of budget tagged ‘Budget of Hope’ revealed that the party lacks basic understanding of governance.
The statement read in part:
“While we acknowledge the role of opposition to include critiquing policies, programmes and projects of government for the overall benefit of the general society, we take exception to criticism which tends to be fallacious in nature and without benefit of any kind to our people.
“The press statement by the PDP on the 2019 budget is a criticism that clearly gives them away as lacking abundantly, in intellectual input, basic understanding of governance and great deficiencies in understanding of what governance is all about.
“It amounts to sheer intellectual laziness and lack of competence on the part of the PDP to criticize a budget based on its christening and failed woefully to critically address the content of the budget as a whole. No critical minded opposition will embark on wild goose chase as PDP has done on the budget.

“It is this regular demonstration of sheer self denial of the substantial success of former Governor Rauf Aregbesola’s administration that will eventually put PDP to permanent displacement in the anals of Osun political history as their obvious lack of depth and capacity to admit some good deeds when seen as strength in the opposition business in a democracy.

“Or, how will anybody continue to argue with scientific facts as provided by credible world organisations upon which the Aregbesola administration had been consistently rated against the remaining 35 states in Nigeria? It will take only a PDP with serious short-sightedness, lack of clear thinking, knowledge and capacity to decipher the good from the bad to continue to refuse to acknowledge the prodigious achievements of Aregbesola.”
Baderinwa noted that Aregbesola’s administration in spite of the PDP federal government induced economic quagmire leading to lean economic resources for the state, was rated the state with the best in terms of tax payment, least poverty stricken state in the country, the state with least misery index in the country, and the state with least number of unemployment in the country.
“In terms of good governance, Osun ranked among the best in Nigeria, and was declared the lowest state in ‘Incidence of Poverty’ in Nigeria by the United Nations Development Programme (UNDP) in the report released by the National Bureau of Statistics (NBS) in October this year. In the overall, Osun earned the title of the most peaceful state among its peers in 2018.
“It is absurd that PDP failed to congratulate Osun as an entity for these accolades even if their politics of bitterness will not allow them to see the many achievements made possible by the Aregbesola led APC government. May we note with utmost pride that we were not that moribund to truth when we were in their shoes as opposition to their lackluster government before us.
“May we state that we have absolute trust in the correct sense of judgment of the real and dispassionate people of Osun that they have clear understanding of what Governor Oyetola meant when he christened the budget that of hope and will get separated from the warped and incorrigible thinking of power mongers in PDP.”
He added that the Budget of Hope in continuation of good governance they enjoyed in the Aregbesola’s era by giving priority to infrastructure, education, agriculture, health and provision of water resources.
Baderinwa further states: “Governor Oyetola is not in any doubt that it is not yet Uhuru in terms of having basic needs for the people of Osun in spite of the tremendous improvement achieved in the last eight years. He is also convinced that Osun has not gotten to the level wished by the founding fathers, hence his determination to offer renewed hope to the people who have begun to enjoy some measures of good governance.
“With serious determination, Oyetola is bent on not taking a backward journey of the days of deluge of problems such as economic stagnation, financial insufficiency, relapse of commerce and business for which the state is known in the past, dearth of infrastructure, dilapidated school buildings, bad roads, etc.
“The Governor will, at all time tell you that we have left Egypt but yet to get to the promised land, and he will unhesitatingly  add that as a progressive government, we are always poised to do more – continue to make life more abundant for the people and deliver dividends of democracy across the board. We are always not satisfied with our achievements, no matter how great they are. That is why we are always hopeful of a better society.
“Governor Oyetola’s administration will surely, through the budget, consolidate on the human capital development achievement to make life more meaningful and abundant for the people of the state which has been in implementations when he was the Chief of Staff.”
The statement explained that the 2019 ‘Budget of Hope’ is structured to service the people directly and indirectly with massive infrastructure development, especially in education and health sectors. Direct and indirect jobs will be created in the coming year with a view to continue ensuring that many more youths are taken off the street more aggressively much than it has been happening.
Baderinwa reiterated that the declaration of an end to modulated salary regime and put a stop to the foolish thought that the best way to run a government is the payment of salaries alone and neglects the other sectors of the society which are equally important in the development of the entire state as a whole.
“The PDP failed woefully in its assumption that Osun have N5bn debt to pay on monthly, as such do not have basis anywhere. It is part of their blackmail strategy aimed at killing the people’s hope, plant fear and hatred in their mind to negate the clear hope that Oyetola comes with. Nothing if farther from the truth as two of the three main debts the state owed directly under the immediate past government will come to an end in payment in 2019 and 2020. PDP is always frivolous with their contentions. Osun people are logical and wise than their shenanigans.” He concludes