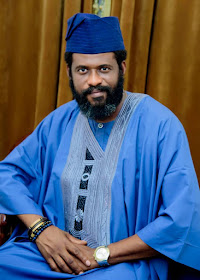 Olaosebikan in a statement issued on Saturday applauded the unwavering contributions of his Supporters across Ekiti, Oke-ero, Irepodun and Isin Local Government areas while in the race to represent the constituency at the House of Representatives.

The Iwo-Isin born politician described the experience as deeply enlightening and a platform through which he has met and nurtured quality relationships.

Reacting to the outcome of the Primary, Olaosebikan thanked immensely Governor Abdulrahman Abdulrazaq and the Kwara APC Party leadership under Prince Sunday Fagbemi for the support while he sought representation for his people on the platform of the Party.

He further called on his Supporters to remain calm and accept the outcome of the Primaries as the will of God who sees the future and would empower him in other ways to sustain his array of Contributions to Community Development across Kwara State at large.

“My love and vision towards building a better KWARA for the present and upcoming generations will never change.” He stated