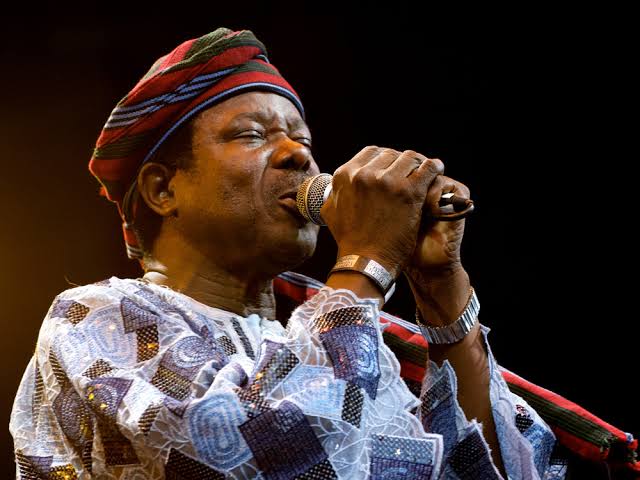 Even in the old testament, we never heard people prophesying to prophets because it is believed that God speaks to them about everything therefore they know every of God’s plan but it seems there is a difference in the case of juju maestro, King Sunny Ade who prophesied to Popular prophet, Primate Elijah Ayodele on July 7, 2000 at the then new site of INRI Evangelical Spiritual Church, Oke-Afa, Isolo, Lagos.

On that remarkable day, King Sunny Ade came in a blue V-boot Mercedes Benz, dressed in a blue shirt and blue jean to perform for Primate Ayodele’s congregation being a close friend to the prophet and one who submits to the man of God as his father in the Lord. The total number of members at the church then was 500.

While performing, Sunny Ade made an unusual move that could have only been orchestrated by the spirit of God. He suddenly went to the four corners of the church and prayed significantly with a cube of sugar. Right there, he released a prophecy that the Lord of host showed him the bright future of Primate Ayodele’s ministry and church. He categorically stated that Primate Ayodele will acquire more lands and will build an edifice that will contain 30,000 worshippers.

As expected, Primate Ayodele didn’t believe this prophetic revelation and one can’t blame him, most won’t expect a juju musician to prophesy but little did he know that Sunny Ade was an angel God sent to minister to him with that prophetic revelation.

However, in 2021, a little after another 10 years, the prophecy has finally come to pass as Primate Ayodele is already building a 30,000 capacity church because of the crowd that throng INRI Evangelical Spiritual Church, Oke-Afa in every service, including weekdays and Sundays.

As King Sunny Ade isn’t known to be a prophet or pastor, there was need to investigate what led to this prophetic move 20 years ago and it was discovered that King Sunny Ade is an apostle at Cherubim and Seraphim church.

To appreciate KSA for being that angel God used to foresee Primate Ayodele’s growth, the man of God has decided to invite the Juju Maestro on his annual thanksgiving which comes up every February 14 to celebrate his 35th year in the service of the Lord. Since he was the one God used for him, it’s important he comes to see his prophecy becoming a reality.

Therefore, all roads lead to INRI Evangelical Spiritual Church, Oke-Afa, Isolo on February 14, 2022 for this mind blowing event. Several prominent individuals including Governors, presidents, ambassadors from home and abroad will in attendance.