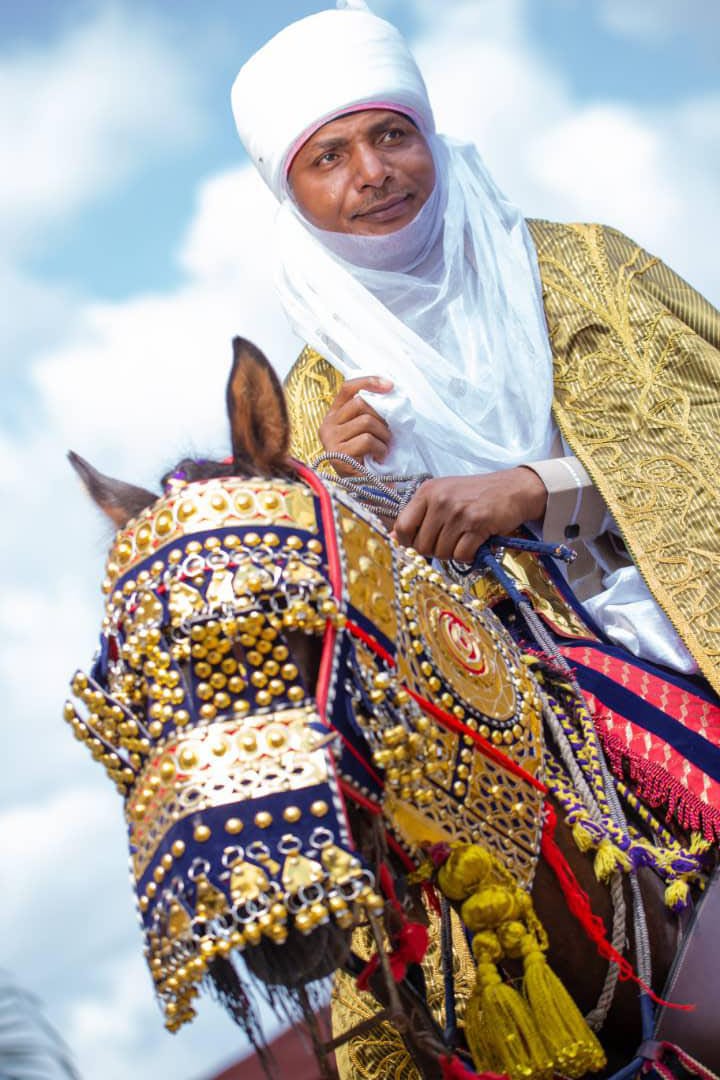 Ilorin, the capital of Kwara State and the seat of the Emirate is agog today as one of its illustrious sons, Mallam Saliu Mustapha , is turbaned the new Turaki of Ilorin.

Royalty, ( led by His Royal Majesty, Dr. Ibrahim Sulu Gbari, CFR), the political clan (led by President Muhammadu Buhari, GCFR), Kwara State Stakeholders( led by Governor AbdulRahman AbdulRazaq), Captains of Industry, and the ordinary folks, will converge first, at the Emir’s palace for the turbaning and later at the Kwara State Banquet Hall, Ilorin for the reception.

Turaki Saliu Mustapha (TSM) is a close ally of President Buhari; he is the former Deputy National Chairman of Buhari’s defunct political party , the Congress For Progressives Change (CPC). He is a Chieftain of the All Progressives Congress (APC).

TSM is stepping into a famous and celebrated traditional shoe. Turaki is a very special senior title in Ilorin Emirate and indeed, in Northern Nigeria. It is bestowed on a respectable individual whose outstanding contributions to the development of the Emirate is unquestionable.
Turakin is like a Minister of Business or Finance in the Emirate. He represents the Emir in whatever the royal father wants the title holder to represent him.

The stature of some individuals who had occupied the Turaki seat underscores the significance of that title. Turakin Adamawa, former Vice President Atiku Abubakar (GCON) and late Dr. Olusola Saraki, a political collosus and Statesman, best exemplify the weight of the Turaki title.
Their remarkable philanthropy, political sagacity and common touch (community development) stood out Oloye and Atiku as Turakin.

Oloye’s son, former Senate President Abubakar Bukola Saraki (CON) took over as Turakin Ilorin when his father became Wazirin Ilorin. The younger Saraki was elevated to Wazirin after oloye’s death.
SM is taking over from ABS as Turaki.

The appointment of SM as Turakin Ilorin apparently took many by surprise. He does not have the visibility of a Saraki or an Atiku. But apparently, the Emir made his choice based on Mustapha’s legendary philanthropy and impactful contributions to the development of Ilorin Emirate.

But despite his taciturn nature , TSM is a remarkable personality. His personae can be defined by his character, his philanthropy and his politics.

I got an insight into his personae during a recent sit-down with him.
Mustapha is a practising muslim who had an early christian education.
He was born and brought up in Kaduna. He calls himself a “special specie” for being a Northern Muslim who went to christian missionary schools for his primary and secondary education.

He attended catholic school, first at St. Ann, in Kaduna and then the famous St. Bartholomew also in Kaduna where former head of state, Gen. Yakubu Gowon (rtd) GCFR, had his primary education.

For his secondary education, it was also first at a catholic school, St. John, Jos where he took christian religious knowledge (CRK) as a compulsory subject, got an insight into the teaching of the bible and participated in Mass.
“It was fun back then”, he recalls with nostalgia.
Mustapha returned to Kaduna to complete his secondary education and then attended the famous Kaduna Polytechnic for his tertiary education where he studied Mineral resources and engineering.

TSM is a successful business man. He started business very early in life with vehicle importation. He is now a big-time importer and exporter.

His unobstructive nature is a model for his business: no noise, no celebrity exposure.

The same model he applies in business, he has tried to apply in politics. But as a rising political star, his visibility has become national and adequately recognized.

In politics, TSM does it big. He enjoys his status as a progressive politician, seared by late Gani Fawehinmi and progressive heavyweights like Chief Olu Falae, late Senator Waziri Mamud, a presidential adviser to Chief Olusegun Obasanjo( GCFR) whom he served under.

Mustapha was variously publicity secretary of Dr. Ezekiel Ezeogu’s Progressive Libration Movement (PLM); was a member of Fawehinmi’s Progressive Action Congress (PAC) and funded the legal luminary’s legal exploits that brought about the liberalization of the registration of political parties by the national electoral commission.

Mustapha was in the All People’s Party (APP) which was rebranded into the All Nigerian Peoples Party (ANPP) and made wave with it’s fielding of Buhari as presidential candidate in 2003.

But Mustapha is best known for his roles in Buhari’s defunct CPC. He was, at very young age, the Deputy National Chairman of CPC who was instrumental to the formation of the APC in 2014. He led the CPC to the legacy party. CPC’s National Chairman, late Prince Tony Momoh was on medical trip abroad and Mustapha as his deputy, signed on behalf of CPC, the merger document that was deposited with INEC for APC’s registration.

TSM is in the limelight for his ambition to become APC’s National Chairman. He is not a political heavyweight in the Nigerian sense, having not occupied elective executive or legislative offices as his competitors (Former Governors, Former and current Senators) have done. But good for him, he doesn’t carry the baggage of some of these heavyweights. He is the youngest aspirant and exhumes vibrancy.

If elected as APC National Chairman, TSM says he will promote party’s internal democracy, instil party discipline and bridge the gap between the older generation and the restive youth generation.

Aspirant Mustapha is not relying solely on his close relationship with PMB to clinch the APC top position;, he is campaigning vigorously, reaching out to the leaders and stakeholders that are garmane to realizing his aspiration.

TSM was the cynosure of eyes at last Saturday’s APC State Congress in Ilorin. Seated with Governor Abdulrahman Abdulrazaq, the Turaki got a loud ovation when introduced to the delegates.

Obviously, TSM hopes to get political mileage from his turbaning as Turaki today and he has a message for his peers, the youth:
“You can’t give what you don’t have. Get involved. The youth can’t sit on the fence. With my participation in politics and my aspiration, I should be able to connive them that it is the right thing to do, to get involved in politics. it is an inspiration for me.”

Adedoyin is a journalist and APC Chieftain