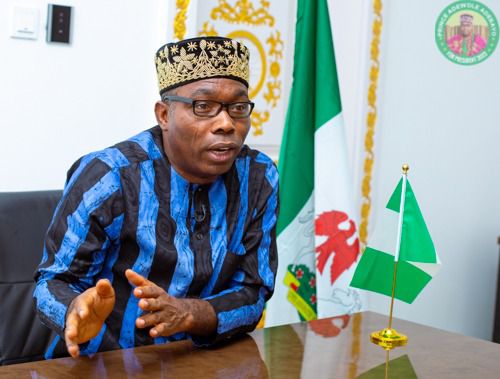 Speaking as Keynote Speaker, Adebayo charged Nigerian youths to takeover politics and economy of the nation.

According to him, The future of Nigeria is in your hands, and you shouldn’t pretend that you have a leader anywhere. You must lead individually to be a good citizen and to be productive, but we must more importantly act collectively to cease control of our future.

He further analyzed that Nigeria has become a governmental orphanage, citing the current leadership deficit in the country.

“Those who are responsible for the affairs of this country, for leadership, for proper governance, for provision of security and welfare have absconded from that duty. So Nigerians are like the children of a wealthy family who lost their parents and their caretakers are looting the resources without care for the beneficiaries or as a company that is under a hostile takeover.”

He pointed out to the Nigerian youth that it’s not enough to be angry and complain. He said that the youth must take ownership because those who are in government did same to those before them, and those who are planning to come now are coming in to loot the available resources if unchecked.

“They are not going to give you even the various basic services that anyone with reasonable competence can give” Adebayo said.

The Presidential hopeful further advised that the earlier Nigerians who love the country, who are youthful and energetic “wake-up”the better it will be.

“You must find solutions to your problem by yourself, act collectively to be productive in the economy with determination to take control of the politics as your responsibility and 2023 general election is an opportunity to do so, to be the government and be the politician” he remarked

Prince Adebayo expressed how proud he is to support the work of the book author Enejoh James and his co-convener Esther Alabi. He praised the huge step of success they have taken to enlighten young Nigerians on the principles of Economics and how they can break the box and become their own boss.

In addition to pledging that he will remain a patron of the book for four years, Prince Adebayo also proposed to set up a research team in Nigeria, donating five million Naira to launch the initiative for everyone interested in economic research and development.

In his closing remarks, the Young Nigerian author Enejoh James expressed gratitude to the Social Democratic Party (SDP) Presidential hopeful saying “I thank Prince Adebayo and others who made donations to this project and to everyone present.”