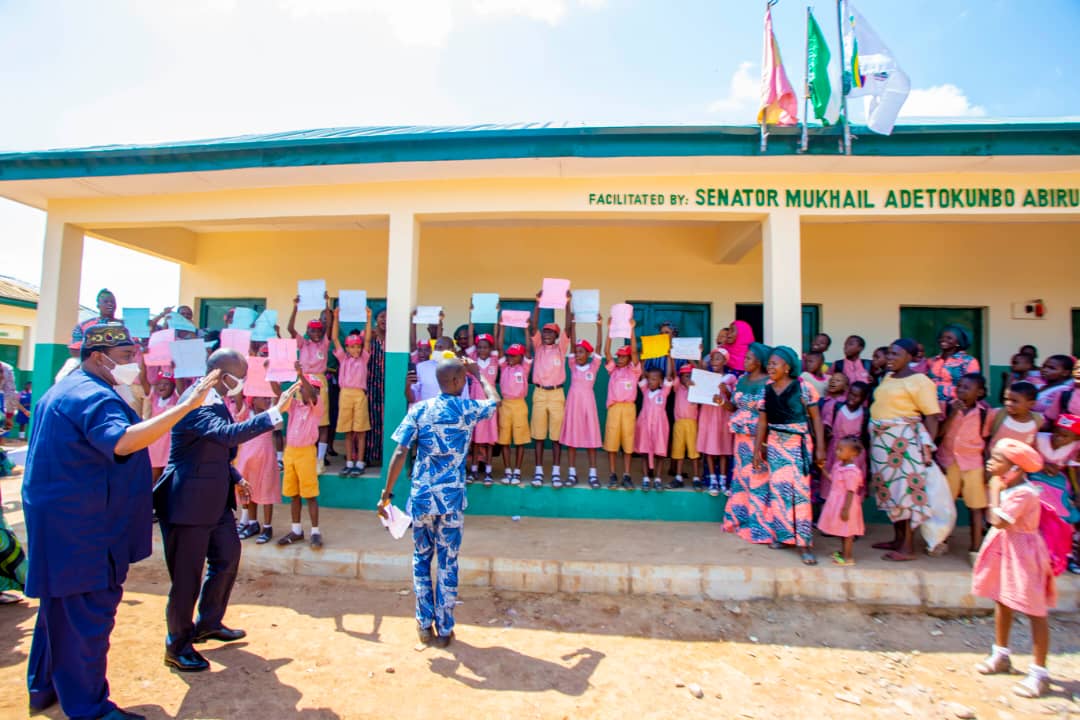 Abiru who is the Senate Committee Chairman on Industries has proven his mettle as a performer since he got into the saddle last December.

The classrooms which are equipped with chairs, tables and other modern instructional equipment replaced a distressed two blocks of four classrooms.

The Senator disclosed that other local governments under the Lagos East Senatorial District are also benefitting projects. He said, “Projects like these are also going on in Kosofe, Epe, Ibeju-Lekki, Somolu, among others. So, this is the way we have staggered the projects”.

He further explained, “The essence of this is to create a platform where pupils can learn in a conducive environment and develop knowledge that will enhance their education pursuit.

“This new edifice will enhance the Pupils to concentrate fully on their study and everything we are seeing here today were done within the space of four months and it shows a lot of determination.”

Abiru while addressing the pupils charged them to concentrate on their studies.
“I want to charge you all to be focused in your education, there is nothing impossible because I am also a product of a public school” The Senator advised the pupils.

The Chairman Ikorodu Local Government, Hon. Wasiu Ayodele Adeshina, in his remarks, applauded Senator Abiru, commending his uncommon performance and gestures in the Lagos East Senatorial within the shortest time.

“I wish to express my sincere gratitude to our Distinguished Senator, Mukhail Adetokunbo Abiru who had facilitated these projects through the office of the SDGs (Sustainable Development Goals)for the success of our pupils here at Aga Primary Schools in ikorodu.

“In the same vein, I appreciate the SDGs for the development of our schools here and in other Local Governments”

The Chairman also urged the Parents and guardians to take advantage of this good initiative by Senator to allow their children to enroll for primary education, saying education is the best legacy parents can provide their children.

He said, “The basic education level is a crucial stage because it is the foundation upon which all other levels are built. It is our desire as a government to ensure that this level of education is strengthened to enhance the future prospects of our children and their ability to cope with the challenges of higher levels of education. So, Senator Abiru’s effort towards actualizing this in Lagos East is quite commendable and laudable”.