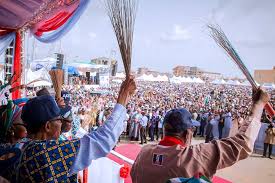 The APC stakeholders from South-East have warned party leaders against imposing any candidate on them through the unity list.

The party members, who stormed the APC National Secretariat, in Abuja, on Friday, said should the party go ahead with the proposed unity list; it could spell doom for it in the 2019 elections.

Speaking on behalf of the four other APC state chairmen from the zone, the Ebonyi State Chairman of the party, Eze Nwachukwu Eze, described attempts by some party leaders to impose those who would represent the zone on them as “offensive.”

The party had earlier resolved to retain zoning arrangement of offices to each geopolitical zone.

Eze said, “All zones, the six geopolitical zones have positions zoned to them. We don’t go to those other zones and dictate who is produced there.

“The position of national chairman, for example, was zoned to the South-South. We have people who are ably qualified to lead the party from the South-East, so, the concentration is to adopt people from your zone.

“We are made up of different people and ideas, but when a person leaves North-East, North-West or North-Central and dives into the positions of the South-East, it is offensive,” Eze said.

The South-East stakeholders urged Buhari to advise those who wanted to impose candidates on the region, adding that such a move could work against President’s re-election bid.

He said, “We are doing this not because of ourselves. You cannot disregard Jim Nwobodo, you can’t disregard Orji Uzor Kalu, Ogbonnaya Onu, Chris Ngige, Martin Elechi, Sullivan Chime, Andy Ubah, Ugbo Orji, Benjamin Uwajumogu and state chairmen, and these are great leaders.”

Other state chairmen from the South-East, who also expressed their displeasure at the event, were: Donatus Nwankpa (Abia), Ben Nwoye (Enugu) and Emeka Ibe (Anambra).