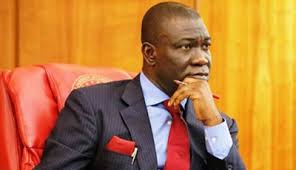 Deputy Senate President, Senator Ike Ekeramadu has explained why the Senate is planning to amend the Nigerian Constitution to allow for state and community police across the nation and the right approaches to tackle the security challenges in the country.

The Deputy Senate President made this known on Wednesday whiling featuring on Sunrise Daily on ChannelsTV Lagos.

We know where you stand on the issue of state police; can you give us a clearer sense of why your position is what it is?

Presently, the country is challenged in many directions and one of the major areas of concern is the security sector. People are killed every day, some people are kidnapped, people are robbed, and we can’t continue that way; something needs to be done. It’s on account of this that we started looking at what options we have and one of them is the issue of decentralising our policing. You see, the society is created in such a way that they come with a whole lot of responsibilities and these responsibilities, they require some privileges, some powers in order to carry out those responsibilities.

One of the responsibilities, as I said, is the issue of protection of lives and properties, and that is why the constitution and, indeed, in the formation of the society, government is given enormous powers to have control of instruments of cohesion. And so, what has happened now is that the criminal elements have overwhelmed the government and so, government cannot be able to perform that responsibility of protecting lives and property because what has happened is that that instrument of cohesion is not structured in such a way as to be able to contain the rise in criminality. So, we need to look at it again and see if there is anything we are doing wrong and do it correctly, and that’s basically the platform.

What are your thoughts about the argument that the police can only operate with what they have at the moment, in terms of resources and funding?

Well regrettably, the issue is not funding. If you bring the whole money in the Central Bank of Nigeria (CBN) and give to the police, nothing will change, certainly nothing. If you do that also with the Army, nothing will change. The problem is structure, not the funding. It’s just like now where we have primary schools scattered all over the country and then you are now telling the Federal Minister of Education to help primary school teachers – no matter how much you give to them, there are many schools that will be forgotten; there are many schools that won’t have teachers, so that’s the problem. So, we are applying the wrong solution to problems that are clearly within our reach to resolve.

If the funds are not enough to recruit high-level graduates into the police force and to purchase the necessary equipment, including vehicles, can we still say the problem is just structure when all of these things are clearly absent to the current context?

What they say is just one part of the argument; the point I’m making is yes, we need all those but if you provide them, the problem will still be there. In Abuja, for instance, we have all kinds of equipment the police are using, all kinds of weapon but yet, they killed seven policemen yesterday (July 3, 2018). I’m not talking about citizens who die on daily basis and nobody accounts for them, I’m talking about policemen who are trained; that’s the issue because the criminal elements have overwhelmed the security sector. That’s the issue I’m making, we need to do something and that is why we are talking about decentralising the police.

What did you have in mind when you say that the National Assembly is pursuing the creation of state police?

There have been a lot of fears and misconceptions about the issue of state police and, of course, it’s well-founded but you see, we have an attitude of running away from our problems in this country, instead of challenging those problems, confronting them. I think the best thing for us is to confront it, ask ourselves a couple of questions – what are those concerns, what are those fears, how do we address them, who are the people who are worried, can we dialogue with them so that they can understand issues? and again is it necessary, will it solve the problems, if it can solve the problems why don’t we deal with it and deal with those fears?

Let me just take you back in history, you know the first set of police we had in this country were native authority police; not the national police. The ordinance of 1916 established the native authority police in Nigeria and it was further enhanced in 1924. Ways back in 1936, the nationwide police were established and they all existed side by side until 1966 and that that is why in those days, if you are selling groundnut you can put your groundnut in front of your house and go to the farm. Somebody will just come, leave the money there and take the groundnut they wanted, you don’t need to fence your house, you don’t need to have a policeman following you around because there are policemen everywhere around the streets; the next neighbour to you may be a policeman, that was all the way it was structured.

And so, as we approach independence, our founding fathers – Zik (Nnamdi Azikiwe), (Obafemi) Awolowo, and Tafawa Balewa, had agreed that ‘for us to live peacefully in a multi-racial large country, we need to adopt a Federal system of government’, and federal system of government comes with certain characteristics and one of these characteristics is that people from different places do things in different ways and are well-coordinated at the national level, and security is one aspect of it and so, we started living that way.

Unfortunately, at the time they were laying the foundation for federalism, especially as it regards that security sector, they did not put in place the proper checks and balances. Like every other things, those policies at the sub-regional level were being abused, especially in 1963 and 1964 elections. When the Army came in 1966, it’s one of the major concerns that look, we cannot continue this talk of national police because it was being abused by politicians at that level. They use it to chase their political opponents. Remember I said we run away from our problems; what they (the military government) did was to set up a committee to look at the gamut of the issues around the sub-national police. By the time the report came out, (Johnson) Aguiyi-Ironsi had been assassinated.

Remember, part of the issues of concern people had about Ironsi government was that he was trying to unify the country into a unity system of government, thereby running away from the system we all agreed. But when that report came out on the issue of policing, the (Yakubu) Gowon government that was accusing Ironsi of a unity system of government adopted the report of that committee which is saying we should do away with all sub-national police and have a centralised police, that is the beginning of our problem. Thereafter, we started having robbery, kidnapping, renowned terrorism, and it’s going to get worse if we don’t do the correct thing.

The point I’m making is that if we are running a federal structure, as I said that it comes with some characteristics, as regards the security sector, what we need to do is to decentralise the police in such a way that there will be a policeman at every point, every corner. If you go to Europe, especially in Germany, one out of the five persons you meet on the street is a security person; that doesn’t happen here. So, if you have 300,000 policemen to take care of the population of Nigeria which is at least 200 million, how is that going to work?

See, I’m looking at just the protection of lives and property and not investigation and detection of crime which is another case, because if you are a policeman and you are assigned to investigate a case in Enugu, for instance, and two months after you are transferred to Kano, do you know what happens to that matter? It’s gone. Or you send somebody from Cross River to Sokoto on an assignment – he doesn’t know how to speak the language, he doesn’t know the culture; nothing and not even the road, these are the issues.